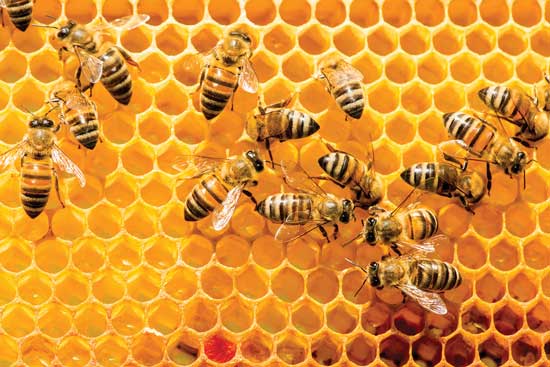 This month’s column follows the “How Is It Processed?” theme. Honey has been called “the nectar of the gods” because of its rich history and contribution to food. This column will explore the properties of honey as well as how honey is processed—from flower to food.

Honey has been consumed for more than 8,000 years, as evidenced by a Mesolithic rock painting showing two honey hunters collecting honey and honeycomb from a bee nest. In 2013, 1.7 million tons of honey was produced worldwide. In the United States in 2015, the overall honey market was estimated to be $555 million, according to Nielsen, up 9% from 2014. Sales of organic honey grew 32% in 2015, making it the primary driver for market growth. New York and Los Angeles were the two largest honey markets, with the Los Angeles market growing the fastest at 25%. The market for liquid honey remains the largest, while other forms also contribute. Seniors generally consume the most honey, and younger households are purchasing notably more honey than in previous years. Asians are the highest honey-consuming demographic.

Properties of Honey
Honey is composed primarily of fructose (about 38%) and glucose (about 31%). In addition, maltose, sucrose, and other complex carbohydrates are present. Honey possesses a distinctive flavor and attractive chemical properties. Other components in honey include vitamins, minerals, acids, pollen, and enzymes, which make it a unique ingredient.

One of the important properties of honey is its stability. It does not spoil over very long time periods. This is in part due to an enzyme found in the stomachs of bees. When the enzyme glucose oxidase mixes with the nectar it creates the by-products gluconic acid and hydrogen peroxide, which contribute to honey’s acidity and antibacterial properties.

Honey is commonly classified according to its floral source. Honeys can be made from one flower source or blended after collection. Mono-floral honeys have distinctive flavors and colors due to differences in nectar source, some of which are clover, orange blossom, lavender, and honeysuckle.

Honey is graded on its color and optical density by U.S. Dept. of Agriculture standards, using a scale called the Pfund scale. The Pfund scale ranges from 0 for “water white” honey to 114 for “dark amber” honey. Grade A honey is very clear and has good flavor and aroma. High-quality honey should flow from a knife with a straight stream at 20°C.

Honey contains both organic and amino acids. The aliphatic acids in honey contribute greatly to the flavor. The typical pH of honey is 3.9. The melting point of crystallized honey is between 40°C and 50°C. The moisture content ranges from 13% to 20%. When heated, honey caramelizes, becoming darker in color. Amino acids present in honey form melanoidin compounds during the Maillard browning reaction.

Honey Processing
• Formation and Deposition. Modern beehives consist of wooden box-like sections stacked on top of one another. Each box holds 8–10 wooden frames, each containing a thin sheet of wax foundation. The bees build their combs on these foundations. Honey is stored in the upper parts of the hives. One bee colony contains approximately 30,000 bees and can produce between 120 and 200 pounds of honey each year, leaving an average of 80 pounds of surplus honey annually.

Foraging bees collect flower nectar using the bee’s long, tube-shaped tongue and store the honey in their extra stomach, called a “crop.” A bee’s stomach can hold 70 mg of nectar, and bees visit up to 1,500 flowers in order to fill their stomachs. To make one pound of honey, bees must visit about two million flowers. The bees use their “crop” to begin to digest the nectar. Upon returning to the hive, the bees suck the nectar from the stomachs of other bees into their mouths as they regurgitate it repeatedly.

Enzymes play a vital role as nectar is ripened into honey. Invertase, amylase, and diastase act with gastric acid to hydrolyze sucrose into a mixture of fructose and glucose. The process takes as long as 30 minutes, and the bees work together regurgitating and digesting and then depositing the honey at approximately 20% moisture into the honeycomb cells. Once deposited in the cells, the bees fan their wings at the amazing rate of 11,000 times a minute above the cells to evaporate water from the honey until it reaches a moisture content of about 18%. This rise in sugar content is important to prevent fermentation in the honey. The bees then cap the honeycomb cells with wax to seal them. 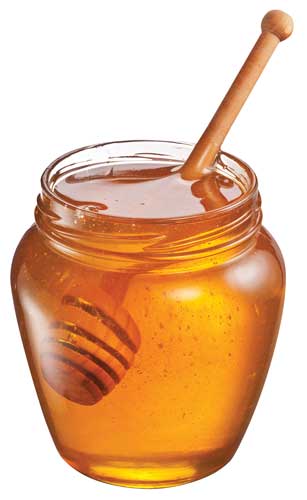 • Collection. Before collection of honey from the frames, the bees in the hive are commonly pacified with smoke. The smoke lessens the aggressiveness |of the bees and obscures their communication via pheromones. It triggers a feeding instinct in the bees to save resources from the hive in the event of fire.

• Extraction and Storage. Next the honey must be removed from the cells using an extractor. The frames are commonly placed into a centrifuge that spins the frames, forcing the honey out of the comb. The honey is spun to the sides of the extractor and then drains out the bottom into a collection vessel. The remaining wax can be pressed in a screw press to remove the remainder of the honey.

• Heating. Because raw honey is viscous and sticky, filtering can be difficult. Honey is often heated to 66°–77°C to decrease its viscosity prior to filtration. Some honey is pasteurized, which requires temperatures of 72°C or higher. The heating process also reduces the moisture content, delays crystallization, and destroys yeast cells, enhancing shelf life. In addition, heating increases the brown color of the honey. Heating can be done in tanks or by means of an infrared heater or heat lamp above the product.

• Filtration. The primary purposes of filtration are to retard crystallization and produce clear product. Various types of filtration are used to produce different types of honey. Membrane filters are most commonly used. The membrane permits some compounds to pass through and others to remain behind depending on its pore size and pore distribution. Macro-filtration is used for gross filtration (10–1,000 µm) to remove bubbles, dust, insect parts, and crystals using cheesecloth or metallic or nylon screens. If this process is used and no heat applied, the honey is classified as raw honey. Microfiltration (0.1–10 µm also removes yeast cells, coal dust, and some bacteria. Honey is typically heated prior to microfiltration and is classified as filtered honey. Ultrafiltration (0.001–0.1 µm) is a process that is sometimes used to produce a final product that in the United States is no longer classified as honey. Ultrafiltration involves adding water and filtering under high pressure at the molecular level, then removing the water. Diatomaceous earth functions similarly to membrane filters and is used in honey processing to remove wax, pollen, bee parts, and some bacteria.

• Ultrasonication. Ultrasound can be used to nonthermally treat honey. It destroys most yeast cells and inhibits crystallization by eliminating existing crystals. Ultrasound treatment typically involves temperatures around 35°C and times less than 30 seconds. Due to the lower temperature, there is greater retention of aroma and flavor in sonicated honey, as well as less browning.

• Creaming. Honey can be processed through controlled crystallization. Creamed honey contains a large number of small crystals, which prevent the formation of large crystals; it has a smooth, spreadable consistency.

Honey Production Innovations
Honey production has become high tech as new innovations are made. Modern bee hives are designed with remote hive monitoring systems that enable beekeepers to remotely track and optimize honey production. The hives sit on scales that measure the hive’s weight, the key indicator of honey flow, enabling the beekeepers to harvest at the optimal time. Infrared sensors at the entry to the hive track the numbers of bees coming and going, as well as the brood temperature and humidity, enabling beekeepers to optimize bee breeding. Another recent invention is a commercial mobile extraction system that allows beekeepers to harvest and process 1.4 tons of honey an hour onsite, enhancing efficiency by 42%. These and other innovations are paving the way for a thriving honey industry in the years ahead.