Nutraceuticals are a diverse, very explosive component of a growing number of retail food categories. So it’s no surprise that many traditional food products, such as milk and oatmeal, have undergone a marketing makeover to capitalize on this $15-billion bandwagon (up to $40 million by some estimates, depending on the definition). 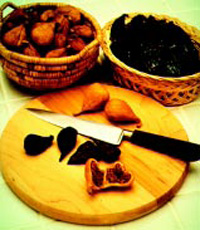 Nowhere is the marketing transformation more apparent than among fruit growers. Many fruits contain compounds that have extraordinarily healthful characteristics, facts that growers and cooperatives are quick to move to the front of their new marketing programs.

Organizations such as the California Fig Advisory Board have spent decades trying to win over the food industry to new uses for the fig and replicate the success of the Fig Newton and further boost consumption. Concepts like fig salsa and fig-based fat replacers have been touted for years without a major impact on overall per capita consumption.

The nutraceutical juggernaut, however, may offer the best hope for elevating consumer and processor interest in the fig, and current promotional efforts reflect this emphasis. A recent fact sheet from the CFAB, for instance, promotes new dried fig research conducted at the University of Scranton and Rutgers University showing that figs are a good source of omega-3 and omega-6 fatty acids. In addition, it claims that “dried figs have a high quantity of polyphenols per 100 grams when compared to other dried fruit; dried figs have superior quality antioxidant polyphenols compared to other dried fruit; the quality of antioxidants present in dried figs are over 8 times better than vitamin C and 15 times better than vitamin E; dried figs provide a greater increase in antioxidant activity than green tea after consuming a single serving; and dried figs contain disease fighting polyphenol antioxidants and phytosterols. . . .”

Combined with a long-standing reputation as a source of high fiber and minerals, figs clearly can lay claim to nutraceutical status based on their antioxidant qualities. So can prunes, raisins, and plums—all of which have higher oxygen radical absorbance capacity than oranges, according to the U.S. Dept. of Agriculture’s Agricultural Research Service. Antioxidants aid in disease prevention and may retard the aging process.

Berries of virtually all varieties also embody significant nutraceutical qualities. Blueberries, blackberries, strawberries, and raspberries all score high in antioxidant qualities, several higher than top-scoring vegetables such as kale and spinach, according to ARS. One study, released earlier this year, indicates that chemicals found in berries may help prevent cervical and breast cancer. The study was conducted primarily by ARS at its Natural Product Utilization Research Unit in Oxford, Miss., under the direction of David Wedge.

“This research should provide important data and help clarify anticancer and nutraceutical benefits of small fruits that have been attributed to some phytochemicals,” Wedge asserted.

The research also supports increasing media attention and consumer interest. Raspberry growers in Washington, who produce 84% of the nation’s crop, have seen yields climb at double-digit rates. A key part of their recent marketing efforts is research from the Hollings Cancer Center in Charleston, S.C., which pegs raspberries at the top of the cancer preventive list among all small fruits.

Similarly, blueberry growers throughout North America have benefited from their number-one ranking on the antioxidant list of berries. The blueberry’s blue pigment, anthocyanin, is a powerful agent against free radicals. One Japanese study shows that blueberry extract has a positive effect on eyestrain. The United States high-bush blueberry industry recorded its fifth straight year of record shipments to Japan, with a total of 3,159 tons of fresh and frozen blueberries last year.

Growth will be further fueled by a marketing campaign in Japan linking blueberries with youth, activity, and the country’s 5 million baseball players. Blueberry muffins also are catching on with the Japanese public. On the other side of the globe, Scandinavians show a growing interest in blueberries, according to the North American Blueberry Council.

Among the most aggressive fruit marketers is the Cherry Institute, which promotes tart cherries as the “healing fruit,” stressing their antioxidant profile and high levels of melatonin.

Even watermelon is being repositioned as a nutraceutical. The fruit is high in cancer-fighting lycopene, as are tomatoes, red grapefruit, and guava. Watermelon, however, has significantly more lycopene per serving than any other red or pink fruits. The National Watermelon Promotion Board has revamped its promotional efforts and increased funding for additional research.

As study after study affirms the nutraceutical benefits of fruits and berries, look for both growers and processors to escalate their marketing claims. The healthiest supplements may turn out to be in the produce aisle.