Sweeteners have a great impact on the acceptance of beverages, affecting not only the taste but also their texture. Beverage manufacturers have been using sweetener blends instead of single sweeteners in reduced-calorie beverages for some time now, with many successful products well established in the marketplace. 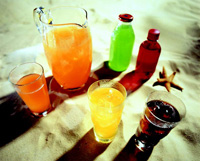 For products that include high-intensity sweeteners, beverage manufacturers tend to use the same sweetener blend and ratio for their full spectrum of flavors in an attempt to save development time. However, by creating new blends of sweeteners or modifying the proportions of current blends, manufacturers can optimize the sweetening systems for specific types and flavors of beverages.

Here’s how we approached the development of optimal sweetener blends for various types and flavors of beverages.

Cola Beverages
We tested a variety of commercially available sweeteners, both caloric and noncaloric, using a commercially available cola flavoring. A combination of phosphoric and citric acids, commonly used for diet and light colas, was used as the acidulant system. The test beverages were carbonated with 7 g/L. Five high-intensity sweeteners—acesulfame K, aspartame, sodium saccharin, cyclamate, and sucralose—alone and in various combinations (Table 1) were tested, with sucrose as the standard. All sweetening systems were adjusted to a 10% sucrose equivalence, based on sensory assessment; i.e., enough of a sweetener was used to be equivalent in sweetness to a 10% solution of sucrose. Blends were then formulated on the basis of the sweetness contribution of each sweetener. Thus, in a 25/75 blend of two sweeteners, 25% of the sweetness comes from the first sweetener, and 75% from the second. The actual usage volume was adjusted to account for synergy between the sweeteners.

An independent panel of experts trained to evaluate sweet products held a group discussion to determine a list of attributes to be used in a subsequent Quantitative Descriptive Analysis (QDA). Fig. 1 shows these attributes for a sucrose-sweetened sample.

For the QDA, 13 trained panelists conducted a blind tasting of randomized and coded samples and rated them individually on a scale of 0–100. Attribute scores were recorded directly by the panelists via a computerized data input system, and the data were analyzed by two-way Analysis of Variance (ANOVA) and Principal Component Analysis (PCA).

Cola flavors are exceedingly complex systems. Many different flavor components, especially various herbal and citrus notes, are hidden beneath the general taste impression of cola. The character of a particular cola drink results from the dominance of one or more of these top notes.

The results showed not only that the various sweetening systems influence the expression of the overall cola flavor (“total cola”, “cola aftertaste”) but also that the majority of the systems also emphasize one of the two top notes “spicy” and “lemon-lime” in a specific way. Therefore if a switch is made from a sweetening system that emphasizes the attribute “spicy” to a blend that pushes citrus notes to the forefront, the overall cola character of the beverage will be changed accordingly.

Table 2 shows the expression of the flavor attributes “total cola,” “spicy,” and “lemon-lime” for a few selected blends. Sucrose strongly emphasizes the citrus notes in a regular cola, while the herbal notes are greatly underrepresented. This leads to a moderate impression of total cola flavor (“total cola”). It is notable that for diet and light colas, particularly good results for “total cola” appeared when “spicy” and “lemon-lime” were evaluated as being in balance (30/70 acesulfame K/sucrose, 30/70 acesulfame K/aspartame, or aspartame) or when “spicy” was more dominant than “lemon-lime” (35/35/30 acesulfame K/aspartame/cyclamate, or 20/80 acesulfame K/sucralose). In contrast, dominance of “lemon-lime” over “spicy,” as in the case of 70/30 aspartame/saccharin, resulted in a low rating for “total cola.” 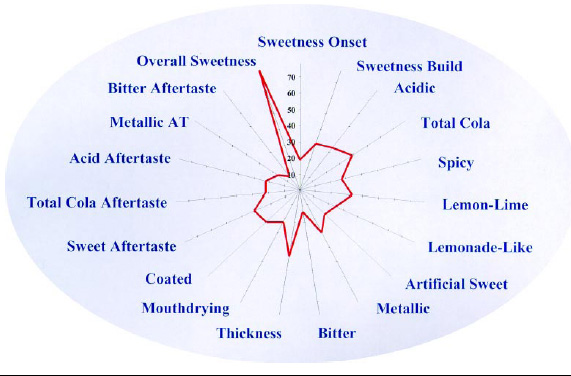 The lack of mouthfeel in low-calorie soft drinks is generally regarded as a negative. In our study on the cola beverage, the sucrose standard surprisingly failed to receive the best results for “thickness,” and no significant differences were observed between the sucrose standard and any of the sweetening systems studied. It may be that carbonation plays such a great role in mouthfeel that the influence of the sweetening system is secondary. For a more precise analysis, it would be necessary to conduct a detailed sensory analysis of mouthfeel. Nonetheless, the results indicate that mouthfeel, especially in carbonated low-calorie drinks, need not be viewed as critically as previously assumed. 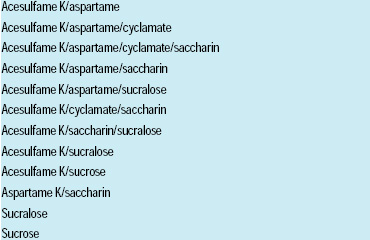 Fruit-Flavored Still Beverages
We studied three commonly used flavorings with different characteristics—orange, peach, and strawberry—in a model noncarbonated beverage (citrate buffer, pH 3.2). As in the cola study, different combinations of sweeteners were tested at a sucrose equivalency of 10%.

A panel of testers specially trained in the evaluation of sweet products determined the attributes for the QDA. Table 3 shows the attributes for the peach flavoring. The results of the QDA and PCA showed that whereas the single sweeteners aspartame and sucralose differed significantly from sucrose in their sweetness profile and left a lingering sweet aftertaste, blending them with acesulfame K led to a noticeably more sucrose-like sweetness profile in all cases, an example of synergy.

Sucrose was characterized by a balanced profile with fast sweetness onset without a pronounced sweet aftertaste. It was also associated with positive taste attributes like fruitiness (“total peach,” “ripe peach,” “peach aftertaste”) and good mouthfeel (“thickness”) without bitter taste notes. In contrast, the single sweeteners aspartame and sucralose exhibited a long “sweetness build” and a pronounced and long-lasting “sweet aftertaste.” Combining these sweeteners with acesulfame K shortened the temporal sweetness profile and diminished the sweet aftertaste.

Thus, a 30/70 blend of acesulfame K/aspartame achieved a high degree of fruitiness for an orange beverage; 30/70 and 50/50 blends for strawberry; and all three blends for peach. By selecting the right blend ratio, the taste profile, sweetness stability, and costs of the total system can all be optimized.

Carbonated Lemon-Lime Beverages
We also evaluated blends of acesulfame K with aspartame and sucralose in carbonated lemon-lime drinks. The goal was to develop sweetener blends that would retain a sucrose-like taste profile over an extended shelf life.

Carbonated lemon-lime beverages using eight sweetening systems (three single sweeteners and five blends) with the equivalent sweetness of 10% sucrose were stored at room temperature for up to 6 mo. At 4, 8, 12, 16, and 24 weeks, a trained panel evaluated samples for flavor, sweetness, chemical and rounded flavor profile, and aftertaste. 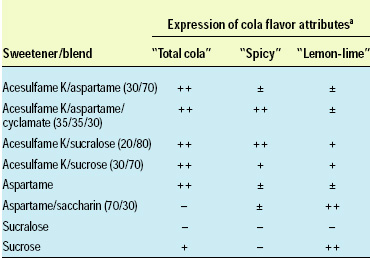 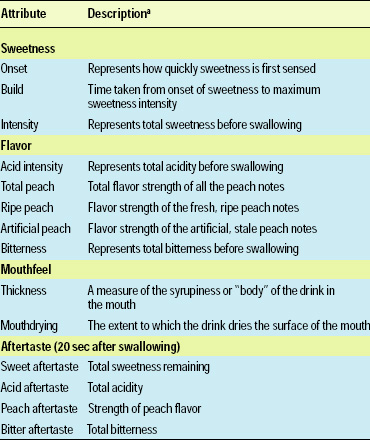 While all sweetening systems tested behaved similarly at 4–8 weeks, after longer storage periods the sweetener systems containing acesulfame K outperformed the other blends. After 24 weeks, the aspartame-only beverage became less sweet, exhibiting a more artificially sweet taste and aftertaste. In contrast, the sweetness of the 30/70 acesulfame K/aspartame beverage remained close to that of the sucrose control. This is because in the aspartame-only beverage 50% of the aspartame degraded during storage, but blending aspartame with acesulfame K minimized this effect.

Thus, blending acesulfame K with other high-intensity sweeteners results in a sweetness profile that closely resembles that of sucrose. In addition, the fact that using acesulfame K blends provide longer shelf life has major implications for manufacturers of carbonated beverages.

Customizing Sweetener Blends
The results of these studies showed that there are significant benefits to be gained from customizing sweetener blends when developing new beverages or reformulating existing beverages. The role of the sweetener has progressed beyond that of a “calorie-reducing agent” to an ingredient which can add real value in influencing and optimizing taste and stability as well as economics.