"Doctors say having one regular soda is like enjoying liquid candy,” intones Dina Bair, Medical Watch reporter for Chicago’s WGN-TV. “In fact, it’s the same as a bag of M&M’s. The problem is on average most people have three sodas a day. That’s three bags of candy. At 250 calories a bag, that means 750 calories. . . .” But that’s just the tip of the iceberg, Bair says, the perils of pop approach the level of a national health scandal, and she says she has sound bites from experts to prove it. 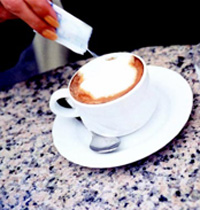 This story was broadcast on May 23, in the midst of sweeps month, when local stations across the nation competed for viewers and the ad revenues that go with them. Food fright is a natural attention grabber. Unfortunately, such stories are often more hype than hard fact, supported by experts who are quick with opinion but short on knowledge. The resulting confusion often has a big impact on consumer behavior and artificial, or non-nutritive, sweeteners are a good case in point.

“Think diet sodas are any better?” Bair asks her audience. “It may say no calories on the can, but your body doesn’t believe it.” Then comes the expert clip featuring Amy Halverson, a surgical oncologist at Chicago’s Northwestern Memorial Hospital. “If you drink a lot of the diet soda, your body will learn to metabolize the aspartame, you’ll start to absorb calories from that, and it will start to metabolize that,” she says.

Bair clarifies: “By metabolizing the sugar substitute, your body actually turns it into sugar, which can be stored and eventually turned into fat.”

An astonishing revelation if accurate, but it’s not. Viewers were left with the disturbing notion that three cans of diet cola containing aspartame might just be the same as three bags of M&M’s.

This rap against aspartame, the leading artificial sweetener in a market of four approved products that includes saccharin, sucralose, and acesulfame K, is not new. The Internet is replete with allegations of health threats, most of which date to the legendary Nancy Markle letter that was originally posted, linked, and emailed around the world in 1995. In it, Markle, who has never been identified, connects aspartame to a host of medical conditions. Typical is the statement: “There are 92 documented symptoms of aspartame, from coma to death. The majority of them are all neurological, because the aspartame destroys the nervous system.”

The Markle letter is widely considered the catalyst for a sustained movement that has directly and indirectly fueled considerable media attention, public policy decisions, medical opinion and ultimately, consumer behavior over the last decade. The impact has been felt throughout the artificial sweetener market, which has several new approvals pending. The stakes are high. More than 144 million American adults regularly consume low-calorie, sugar-free products, according to the nonprofit trade organization, the Calorie Control Council. The oldest artificial sweetener is saccharin, 300-500 times sweeter than sugar, which was discovered in 1879. Because it is relatively stable at high temperatures, and inexpensive to manufacture, saccharin has been widely used as a sugar substitute since in the 1950s. In 1977, the Food and Drug Administration initiated a warning label policy in light of inconclusive evidence that the sweetener might cause cancer in high doses. The labeling requirement was rescinded in 2000 when the U.S. Dept. of Health and Human Services released its National Toxicology Report on Carcinogens, which removed saccharin from its list of cancer-causing substances.

The only knock against saccharin presently is its bitter, metallic aftertaste. This property was the reason for aspartame’s quick ascendancy as the number-one-selling low-calorie sweetener soon after its approval in 1981. It is 180 times sweeter than sugar, but breaks down under high temperatures. For that reason, aspartame is most widely used in beverages and tabletop packets. It also has been the most widely studied artificial sweetener, especially in light of the intense criticism it received in the mid-1990s.

The market again expanded in 1988 with the approval of Nutrinova, Inc.’s acesulfame K (Sunett®), which is 200 times sweeter than sugar. It holds up to heat, but has some bitterness. It is used in foods such as gum, powdered drink mixes, tabletop packets (Sweet One), puddings and bake mixes, and yogurt.

The newest approved artificial sweetener is sucralose, 600 times sweeter than sugar. It is non-bitter and approved for use in soft drinks, bakery products, candy, and tabletop packets. It was approved in 1998, with sales initiated by Johnson & Johnson under the Splenda brand in 1999.

During the first quarter of 2002, sales surged 42% compared to the year earlier period. In contrast, sales for Cumberland Packing Co.’s Sweet’n Low, the leading saccharin brand rose 3%, while Equal brand aspartame, now owned by newly created Merisant Co., was down 8%. During the same period, Splenda grabbed 19.4% of the tabletop market, just behind Sweet’n Low at 21.5% and Equal at 30.9%.

Part of this success is due to deft marketing by Johnson & Johnson, a $30-billion consumer products powerhouse. Realizing the negative tide that was eroding confidence in artificial sweeteners back in 1999, particularly aspartame, J&J opted for a stealthy launch. It relied primarily on industrial and Internet sales, thus creating a grass-roots mystique. It also stresses that Splenda is actually made from sugar, a theme that has resonated with wary consumers. The result is a grass-roots network of support that has propelled Splenda’s rapid ascendancy. In addition to the tabletop product, it is found in more than 400 brands, like Diet Rite, Tropicana Twister, Ocean Spray, Swiss Miss, and a wide number of health and fitness foods.

While Johnson & Johnson is hammering away at the artificial sweetener market, it also is growing a category that languished during most of the 1990s due to consumer skepticism and a focus by health professionals on fat and cholesterol. Last year, tabletop sweetener sales grew by more than 10%, while diet soft drinks outpaced regular soft drinks, due to strong growth by Diet Pepsi, Diet Coke, and Diet Dr Pepper. The category grew 0.7%, while regular soft drinks grew 0.5%, according to Beverage Marketing Corp. Other than Diet Rite, most diet soft drinks are sweetened with aspartame, or a blend of aspartame and saccharin.

Even marginal growth is a positive sign for artificial sweetener companies, due to the intense competition from noncarbonated beverages such as iced tea and bottled water.

It may also signal a tapering off of media criticism such as the WGN-TV report. That’s good news for organizations such as the Calorie Control Council. “The negative press on aspartame was far worse two or three years ago than it is right now, with the exception of the [local television rating] sweeps,” stated Lyn Nabors, CCC’s executive vice president. She stressed that most of the bad press is based on recycled Internet data that have been refuted by independent research, including FDA studies. “The original Markle e-mails are still in circulation. They just rehash the same old thing.”

Nabors also is encouraged by the renewed emphasis by health professionals on the role of calories in controlling obesity. “They’re no longer holding diet foods responsible for weight gain. For so long they stressed fat intake and didn’t really talk about calories. Now health professionals are admitting they made a mistake—the bottom line is calories in, calories out.”

Nabors stressed that obesity is a serious health issue in America today. This, combined with a strong scientific foundation for the safety of approved artificial sweeteners should bode well for the market.

In addition, several new sweeteners are being reviewed by FDA, including aspartame derivatives neotame and alitame, as well as cyclamate, which was widely used in low-calorie and diet foods and beverages until it was banned in the U.S. in 1970. It is widely used in the European Union, Canada, and most of South America, and subsequent testing has reaffirmed the product’s safety. “It’s not a priority with FDA,” Nabors said. “It’s hard to get attention where we want it, but we’re working on it. “

Even without cyclamate, the artificial sweetener market will continue to expand, with more approved products and stiffer competition. Already, competitors are beginning to seek out and dominate lucrative niches. Merisant, for instance, is aiming Equal at the aging baby boomer market, battling middle-aged spread and diabetes. It is running ads in Diabetes Digest and older demographic editions of Readers Digest and TV Guide. Meanwhile, Johnson & Johnson continues to shift from stealth marketing to a mainstream appeal to the youth market. Last year it ran a $30 million ad campaign for the brand, which featured soccer star Mia Hamm as a spokesperson.

Soft drinks may become the next battleground. Despite Internet rumors, weird science, and the media shock stories, diet and health conscious consumers seem willing to satisfy their sweet cravings with artificially sweetened, low-calorie foods and beverages. Says Nabors, “The consumer is getting a little more savvy.”