Food products are analyzed for a variety of reasons, including to comply with legal and labeling requirements, to assess product quality, to determine nutritive value, to detect adulteration, and for research and development purposes. 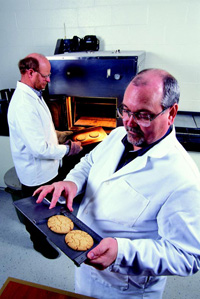 All food analysis—and, by extension, all physical quality control—stems from obtaining a portion or sample of a defined food production cycle and using this sample for testing. Sampling is at the heart of quality monitoring. Proper sampling ensures that quality control measurements are an accurate reflection of the overall quality of the food product.

Although in the food industry, samples may be used for a wide variety of testing, such as pesticide residue analysis or nutrient analysis for labeling, the principles involved with sampling are the same for all testing. And samples in food industry have special considerations that dictate how the samples are taken, stored, and analyzed.

The analytical results obtained are dependent on the sampling technique used and how the samples have been chosen. Errors may be produced by not understanding the population as a whole or sampling a subset of the population that is not truly representative of the whole.

• Simple Random Sampling. This technique requires that each sample from the population has an equal chance of selection. The user first defines the population and then randomly selects from the entire population. There is a certain amount of uncertainty, or variability, associated with the estimates made for the larger population based on the smaller sample. This type of sampling is simple to apply and the analysis of data is reasonably easy; however, the sample may not be representative of the whole.

• Stratified Random Sampling. In this technique, the population is first divided into nonoverlapping sub-populations called strata. If sampling from the strata is simple random sampling, the whole procedure is called stratified random sampling. It can lower the error associated with population estimates by sampling separately within each group and deriving estimates for the population from the individual groups. Complicated data analysis can be required if the strata are not clearly defined.

• Cluster Sampling. In simple random sampling and stratified random sampling, single subjects are selected from the population. In contrast, in cluster sampling the subjects are selected in groups or clusters. This approach allows the user to overcome the large costs and time associated with sampling a dispersed population. Unlike stratified sampling, the clusters are thought of as being typical of the population, rather than subsections. One problem with this sampling is that clusters may not be representative of whole population.

• Systematic Sampling. With this technique, the user randomly chooses a starting point within a sampling timeframe, and then takes samples at regular intervals. For example, the start of a production run is sampled, and then samples are chosen at some set interval, such as every tenth unit. This is more precise than simple random sampling, as the samples are more evenly spread over the population. However, if the samples have a periodic difference, the results can be misleading.

• Composite Sampling. This sampling technique is used to obtain samples from items in bulk. Two or more samples are then combined to reduce the differences between the samples.

Sample Preparation
Food samples can exhibit a large variability. It is usually necessary to make samples homogeneous before they are analyzed. Several devices have been developed for homogenizing or blending food samples. The type used depends on the properties of the food being analyzed.

Reducing particle size in samples is the first step to achieving homogenization. There are numerous types of mills, based on their mode of action: burr, hammer, impeller, cyclone, impact, centrifugal, and roller. Hammer mills are used to grind cereals, oil meals, and most dry foods. Ball mills are used for small samples; the sample is placed in a container half-filled with balls, which produces an impact-grinding action as the container rotates constantly. Chilled ball mills can be used to grind frozen samples, thereby reducing chemical changes in the sample.

Union Process, Inc., Arkon, Ohio, offers an Attritor mill. The Attritor is a grinding mill containing internally agitated media. The most important concept in this type of mill, also referred to as a stirred ball mall, is that the power input is used directly for agitating the media to achieve grinding and is not used for rotating or vibrating a large, heavy tank in addition to the media.

For sample preparation of moist samples, various slicing and blending devices can be used. In tissue grinders, which are used for small samples of soft material, the sample is forced through two concentric cylinders. In colloid mills, the sample suspension is pumped through a gap between two surfaces until the particles are disintegrated by shear.

Retsch, Newtown, Pa., offers a range of state-of-the-art mills and crushers for coarse, fine, and ultra-fine size reduction of sample material prior to analysis. The ultra-centrifugal mill is used for rapid reduction in size of soft to medium-hard and fibrous materials. For sieve analyses, the company offers analytical sieve shakers and sieves.

For microbiological and other sterile sampling needs, systems that blend or homogenize samples in the sampling bag or container are available. With such systems, there is no need to clean the equipment between samples. The user can produce homogenized samples continuously without any cross contamination. After use, the sterile bag is simply discarded. These systems use a mechanical action in which contoured paddles apply pressure to the sample bag, effectively washing out microorganisms. Bacteria are extracted from most food samples in about 30 sec. Besides bacterial sampling, these systems can blend many materials which cannot be handled by conventional blenders.

• Enzymatic Action. One of the general problems in many food sample preparation procedures is enzymatic action after sampling. If the analyst is seeking to determine total content of compounds such as sugars, lipids, or groups of proteins, the sample should be prepared in a manner to inactivate any enzymes that may cause changes. There are several treatments for enzymatic inactivation. They depend on the sample, desired results, and type of enzyme.

• Lipid Protection. In foods, especially high-fat foods, lipids may be a problem. High-fat foods may be difficult to grind and may need to be frozen. Unsaturated lipids may be altered by various oxidation reactions. Exposure to light, elevated temperatures, oxygen, or pro-oxidants can increase the rate at which these reactions proceed. Consequently, it is usually necessary to store samples that have high unsaturated lipid contents under nitrogen or some other inert gas, in dark rooms or covered bottles, and at low temperatures. Antioxidants may be added to retard oxidation if they will not interfere with the analysis.

• Microbial Growth and Contamination. Microorganisms are present in most foods and if not controlled can alter the composition of the sample. Freezing, drying, heat treatment, and chemical preservatives (or a combination) are often used to control the growth of microbes in foods. The preservation methods used are determined by the storage conditions, time, and analysis to be performed.

• Physical Changes. Several physical changes may occur in a sample, e.g., water may be lost due to evaporation or gained due to condensation; fat or ice may melt or crystallize; and structural properties may be disturbed. Physical changes can be minimized by controlling the temperature of the sample, and the forces that it experiences.

Automated Sampling Systems
Several systems have been developed to assist in sample preparation. These include liquid handling systems and sample processors.

Liquid handling systems provide rapid and reproducible liquid handling through automated pipetting and dispensing. Pipetting sequences and protocols that are carried out manually can be transferred to the systems. Typically, programming controls the testing of the liquid volumes, the pipette tip type, and the tubes used.