To achieve your aim, sometimes you need to be willing to trade off one benefit to the detriment of another. When it comes to developing palatable meat analogs, food scientists might find themselves frequently exercising this maneuver, with decisions on which elements to juggle and prioritize based not on generalities, but on specific end-product uses. 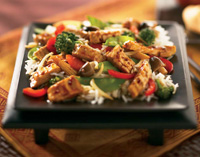 With all the activity surrounding meat analogs during the past 10 years, one might think they were invented during the 1990s, then suddenly burst onto the supermarket scene. In fact, b&#x0;1C;modernb&#x0;1D; use of the products began in the 1960s, and the first Western documentation of a non-tofu soy protein isolate reportedly occurred in the 1903 article b&#x0;1C;On Vegetable Proteinb&#x0;1D; by chemist Oskar Nagel, who communicated his findings to the Chemistsb&#x0;19; Club in New York (Shurtleff and Aoyagi, 2004).

But the story goes back much further than that, with tofu, the ancestor of the current soy protein isolates, dating back to China more than 1,000 years ago. Perhaps the pivotal point for the modern era took place in 1964 when the U.S. Dept. of Agriculture gave the green light for soy protein isolates to constitute as much as 2% of cooked sausage, a standard that remains in effect today. In addition, soy protein concentrate is allowed to reach the 3.5% level, provided the product is properly labeled (Hegenbart, 2002).

Texturized soy protein also enjoys a long history, with the first versions appearing in China roughly 1,000 years ago and composed of deep-fried or frozen tofu. These were created by Buddhist chefs to accommodate the vegetarian lifestyle of their faith. Some of these recipes are heralded as the worldb&#x0;19;s most refined meat analogs.

However, despite soyb&#x0;19;s position as probably the most common protein used in analogs, several different proteins can be used in making meat-mimickers, including those derived from wheat, a lesson not lost on John Harvey Kellogg, who is credited with creating the Western Hemisphereb&#x0;19;s first meat analogs.

Given meat analogb&#x0;19;s current potential in servicing the food-service fieldb&#x0;14;USDA regulations permitted soy content to be as much as 30% (hydrated basis) of a school meat/meat alternative productb&#x0;14;itb&#x0;19;s interesting to note that the first American use of the technology was devoted to this culinary sector. In 2000, USDA made changes to the regulations to allow for soy protein (hydrated to a minimum of 18% protein) and other vegetable proteins to meet 100% of the meat/ meat alternative requirement in the school lunch program (FNS, 2000).

What has history taught us? The story of soy as a meat alternative has been one of extension and substitution. A roughly 15-year examination of Japanb&#x0;19;s situation from the early 1960s through the mid-1970s demonstrates a micro-history of the phenomenon. In the early 1960s, Japanese food manufacturers were using soy proteins to extend fish pastes as well as dairy and meat products. By 1974, faced with a 200-mile offshore fishing limit, the Japanese food industry countered escalating fish prices by significantly increasing its soy protein use to an annual 16,000 tons in 1976 (Shurtleff and Aoyagi, 2004).

Today, both uses frequently are seen. Soy can extend meat products while providing an economical, high-quality protein source. In addition, soy proteins can provide functional properties to a formulation such as gelling/textural capabilities, fat emulsification, and water-binding. These properties can improve slicing, reduce purge, and improve fat and moisture retention in the finished meat product.

Market Factors
Since true vegetarians constitute just 1b&#x0;13;2% of the United States population, other factors must be at play to contribute to meat-analog interest. The reasons frequently cited are health and nutritional benefits, environmental considerations, religious beliefs, and animal rights.

If one trend is evident, itb&#x0;19;s that just offering the public a soy burger is yesterdayb&#x0;19;s news. This arenab&#x0;19;s true finished-product vanguard is represented by incorporating meat analogs into ready-to-eat convenience foods. Web&#x0;19;re talking chili, pizza, lasagnab&#x0;14; true meals that incorporate meat-mimicking soy protein as part of a bigger package.

Where does all this leave meat analogs and their potential for increased share of stomach? Itb&#x0;19;s going to take food scientists doing their homework to move it to the next stage. Most food scientists, it seems, donb&#x0;19;t truly understand meat analogs. Combine that lack of knowledge with a scarcity of individuals working on meat-analog initiatives and you have a recipe for a static market.

Compare that scenario to just a few years ago. A great deal of soyb&#x0;19;s growth occurred between 2001 and 2002, when U.S. retail sales in the sector grew 17%, according to market-research firm Mintel International Group. During 2003b&#x0;13;04, things slowed down considerably to just 6% growth.

Mintel researchers speculated that the dip in soy-product use might indicate a change in consumerb&#x0;19;s interest in soyfoods or might signify that Americans are changing their attitudes toward b&#x0;1C;soy as an ingredient or platform for health.b&#x0;1D;

The Associated Press reported earlier this year that the recent market flattening isnb&#x0;19;t the first to hit the soy market. In fact, after soymilk, tofu, and tempeh sales drove the market during the mid-1980s, a lull occurred in the early 1990s. However, new meat alternatives were one of the factors driving the market to unprecedented heights during the mid-1990s. One of the major challenges during the next several years, therefore, will be determining ways to revitalize the market, which hit $4.0 billion in 2004.

Soyatech market researchers speculate that snack foods and additional dairy replacements might increase soyfoodsb&#x0;19; market share. Regarding meat analogs, that push is going to stem from either consumer demand or marketing companies devising novel methods for moving this segment along.

Poised for Progress
Warts and all, the current meat-analog market is poised to enjoy some benefits that simply werenb&#x0;19;t available several years ago.

Flavor companies are doing a much better job in providing flavors, including enhancing dairy analogs. The flavors being issued today for use in meat and dairy analogs are markedly improved compared to just a few years ago. This is a key element. Soy truly is a neutral building blockb&#x0;14;everything (fat levels, savory appeal) must be built into it. Because of this, attaining good background flavors is essential.

As the meat-analog category has grown, flavor houses have responded with a wide range of flavors for this application. These flavors can provide the characteristic meaty note to the analog, as well as important background notes such as fatty, serumy, roasted, etc. The various proteins that are found in the base matrix might have an inherent cereal note. Flavor suppliers also have developed masking agents to reduce these notes. In addition, the proteins have a tendency to bind with certain components in the flavor ingredients, and this can have a negative impact on the overall flavor profile. Once again, itb&#x0;19;s important for product developers to consult flavor suppliers for flavor ingredients that will work in their base matrix and comply with any other requirements, such as kosher status or artificial-flavor use.

Remember, itb&#x0;19;s a balancing act. Itb&#x0;19;s not going to be b&#x0;1C;one size fits all.b&#x0;1D; A food scientist really needs to know what the product goal is. Priorities must be established. In this market, nutritional content truly is king, and to succeed in the mass market, flavor is everything. Are you looking for low-fat? What vitamin/mineral profile are you seeking?

Both find appeal across a wide consumer base. Some vegetarians might associate a meat-like texture and flavor as a negative and would therefore prefer a meat substitute. Yet, others might have removed meat from their diet for various reasons but still prefer an analog with a meaty texture and appearance. b&#x0;1C;Flexitariansb&#x0;1D; often are seeking healthier eating options and are willing to try both analog types. 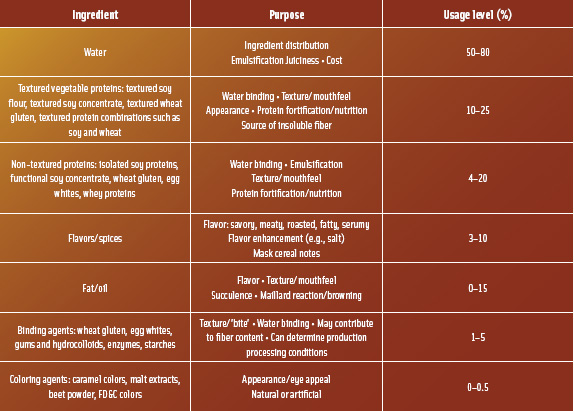 Producing Winning Formulations
The best meat analogs will combine proteins, oils, functional ingredients, and even sweeteners (Table). The order of addition can be important, depending on the type of analog being produced.

If an isolated soy protein or functional soy concentrate is used in a veggie hotdog formulation, for example, itb&#x0;19;s important to develop the soy proteinsb&#x0;19; functional properties. Typically, this is accomplished by hydrating the protein with cold water and applying mechanical action.

If a fat source is used in the formulation, it would be added to the hydrated protein with mechanical action to form an emulsion. This would be followed by the remaining ingredients: binding agents, flavors, and colors. Other ingredients, such as gums and starches, also might require certain procedures to develop their functionality. Other analogs might only require blending of the dry ingredients, followed by the addition of water to prepare for forming or cooking.

All the characteristic attributes found in a meat productb&#x0;14; texture, flavor, fat, colorb&#x0;14;must be added to the analog by the product developer. After selecting the meat counterpart to simulate, the developer must also identify the desired nutritional content (e.g., fat level, sodium content, etc.) early in the development process to reduce time-consuming reformulation later. In addition, the intended consumer market might influence which ingredients are acceptable from a labeling standpoint. All of the above will guide the developer in selecting the ingredients needed to provide the desired qualities. Acceptable texture and flavor often prove to be the biggest development challenges.

Various proteins often are found in meat analogs and in many combinations. Soy and wheat proteins are two that are commonly used. Analogs simulating coarse ground meat products will contain textured proteins (e.g., textured soy flour and concentrates) that are available in various colors and particle sizes. When hydrated, the textured proteins provide a meat-like texture that contributes to mouthfeel. Functional proteins, such as soy concentrates and isolates, often are used in combination with the textured products and help to provide binding as well as fat and moisture retention. An emulsified analog, such as a veggie hotdog, doesnb&#x0;19;t require the use of textured proteins.

Egg white is another protein that can be found in meat analogs and contributes binding as well as b&#x0;1C;biteb&#x0;1D; during the eating experience. However, it is not suitable for vegan applications. Powdered wheat gluten also can be incorporated to help binding and texture.

Even with all the options presented above, other ingredients are frequently incorporated to improve binding and make the texture more meat-like. Carrageenan, cellulose gums, and starches often are found in ingredient declarations. Their water-holding abilities and gelling characteristics will affect the finished productb&#x0;19;s texture and mouthfeel. In addition, how and where they are added to the base matrix will influence processing procedures.

If a firmer texture is desired for a finished product, a food scientist might need to compromise on juiciness to achieve the desired result. Firmer texture and juiciness are inversely related. When functional ingredients are used to increase firmness, moisture becomes more tightly bound, reducing juiciness. Increasing the moisture content creates a softer texture.

When it comes to the processing stage, much is discussed about so-called b&#x0;1C;forming issues.b&#x0;1D; Truth be known, this supposed challenge isnb&#x0;19;t all that formidable. Put simply: If you get it cold enough, it forms. Target temperatures are 20°F and lower. The more water or moisture in the analog, the lower the temperature required to form properly.

Innovation Drives Success
As consumers worldwide continue exploring the relationship between health and food intake, meat analogs will serve a useful function and hold a certain level of appeal. It is up to the food scientist and the food industry in general to advance this technology even further toward improved taste, texture, and nutritional impact.

Innovation will prove key in the coming years to move analogs, and soy in general, to the next plateau. Fresh thinking, continued progress, and eyeing market opportunities will be essential in realizing this technologyb&#x0;19;s full potential.

Shurtleff, W. and Aoyagi, A. 2004. “History of soy protein concentrates, isolates, and textured soy protein products. Chapter in the unpublished manuscript, “History of Soybeans and Soyfoods: 1100 B.C. to the 1980s.” www.thesoydailyclub.com/SFC/MSPproducts55.asp.