Ready-to-eat breakfast cereals were among the first deliberately conceived “health foods,” developed at sanitariums in Battle Creek, Mich., to make more palatable the diets based on whole grains that were advocated then. Some of the processes and products developed in the early days of the industry are still in use. 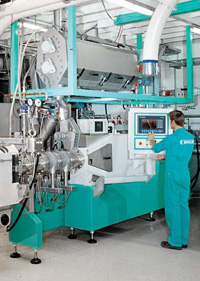 Early products included flakes made from corn grits and wheat berries, shredded-wheat biscuits, and nuggets of barley and other ingredients baked in loaves and then milled and dried. Today, RTE cereals are profitable and diverse segments of major food companies, including General Mills, Kellogg, Kraft (Post), and PepsiCo (Quaker).

A fifth player in the market collectively is the category of private-label cereals made by several small- to medium-sized firms. The private-label products are usually imitations of the branded products but sell for less because the companies have lower marketing costs, do not invest as much in research, and sometimes use less-expensive processes.

Processes
The major cereal processes are flaking, gun puffing, shredding, and extrusion, according to Elwood Caldwell (phone 651-636-2499), Arden Hills, Minn., retired Director of Scientific Services of the American Association of Cereal Chemists (now AACC International). During his previous long career at Quaker Oats, Caldwell was responsible for directing the development of such brands as Life and Cap’n Crunch that utilize cooking extrusion—Life by cooking extrusion of pellets followed by shredding and forming, and Cap’n Crunch by direct expanding extrusion.

As described in the book he co-edited with Bob Fast, Breakfast Cereals and How They Are Made, Caldwell says that the early cereals had separate mixing, cooking, forming, drying, and coating steps. Typically, many of these process steps were, and often still are, batch operations. For example, whole wheat berries or corn grits would be cooked in pressure vessels with added malt, salt, and other ingredients, using direct steam injection. The objective is to gelatinize the starch and temper the grains with enough moisture to make them plastic without turning them to soft mush.

After cooking, the grain is cooled and slightly dried before forming by passing between polished steel rolls to form flakes. Whole-grain rice is also cooked and then lightly “bumped” between rolls before forming by toasting in an oven to make a crisp rice cereal. Modern extrusion technology has allowed manufacture of a credible imitation by direct extrusion.

In the traditional flake process, according to Caldwell, flakes from the rolls are dried and toasted in rotary or conveyor ovens. Some modern ovens use high-velocity jets to fluidize the bed of flakes and shorten the drying time.

If flakes are to be coated with sugar or other flavors, they pass through a coating drum or belt and then are dried again. Coated or uncoated flakes often have a vitamin emulsion sprayed on them as a final process step, followed by another drying step and then packaging. The vitamins and minerals, if used, are added last because they would not survive the high-temperature treatments of earlier process steps.

Cereals are seen as desirable vehicles for delivery of added nutrients because they can represent a significant portion of a daily diet, are usually eaten with milk, and have wide appeal. Often, nutrient fortification is an important part of a given brand’s image and marketing message.

Gun puffing, Caldwell said, starts with cereal flour or whole grains, depending on the products. Quaker and others make puffed whole wheat and rice, while General Mills uses oat flour and other ingredients to make Cheerios. Flour-based products are formed using a low-pressure extruder similar to those used for pasta or “half-product” snacks. The pellets are dried and then heated in a closed pressure vessel. The pellets are released from the elevated pressure either by quickly opening a closure or by transfer through a special valve. The sudden pressure change in the softened pellet causes expansion of water vapor and quick cooling, so that the pellet expands and then hardens. The porous shape retains a crunchy texture even in milk.

Puffed pieces are dried further, coated and enriched as mentioned above, and packaged.

Shredding involves cooking whole grains to a precise moisture content and then passing them through batteries of special rolls in which one roll is grooved and presses against a smooth roll. High pressures are developed as the grain is forced into the grooves, so the rolls tend to be short, to control deflection. In a commercial line, there are many banks of rolls. The threads of wheat are laid over one another in mats and cut into biscuits. A variation is to have cross grooves so that threads are attached to one another.

In some processes, cooked grains may be stored in a relatively moist state before forming. It may be that this step contributes to final flavor by permitting chemical and biochemical reactions to occur. In general, the traditional, relatively slow batch processes seem to produce the more-complex flavored products, though there are constant efforts to increase speed and efficiency.

At least one RTE cereal is made by baking a very heavy loaf of dense bread, chopping the loaf into pieces, drying the pieces, then grinding them further and packaging. The resulting product is so stable that it can be packaged in a cardboard box with no liner.

Caldwell said that one of the great improvements in cereal processing was the application of cooking extrusion. An extruder can combine in one machine the operations of mixing, cooking, forming, and expansion. Quaker was able to focus on extrusion, in part because it had little investment in more-traditional processes other than gun puffing. At the time, there were no extruders intended for foods, so Quaker used equipment from the plastics industry. Today, there are multiple manufacturers of food extruders.

Since extruded cereals undergo significantly shorter processing conditions (high temperature, short time), they tend to develop different flavor profiles compared to traditionally cooked and processed cereals. Efforts to match one with the other are known to present technical challenges, according to experts from the industry and recent market introductions. One of the goals of the branded cereal makers is to deliver products with good taste while also delivering healthy nutrition. Lately, this has meant a focus on whole grains as well as lowering the sugar content and increasing the fiber content of cereal products without compromising taste.

A number of companies provide extruders and other equipment to the cereal industry, among them Bühler AG, Uzwil, Switzerland, Wenger Manufacturing, Inc., Sabetha, Kans., and Clextral, Inc., Tampa, Fla. Andy Hollister (phone 763-764-9900), Buhler’s Minneapolis, Minn.–based Product Manager, said that some of the challenges regarding extrusion of RTE cereals include requirements for increased sanitation of equipment, driven by concerns about allergens and by the focus on nutritionally functional ingredients.

Bühler can provide entire process lines, including flaking rolls and dryers, he said, and is therefore well aware of the challenges posed by increasing fiber content in new products, for example, which results in larger and more fragile flakes. Flakes, Hollister noted, can be made by extruding pellets and then flaking them. This permits use of flour and incorporation of other ingredients, as opposed to using whole berries or grains.

Coating and Inclusions
Sugar coating is a complex topic in its own way. Coatings may be transparent or opaque and may now include artificial sweeteners such as aspartame and noncariogenic materials such as sugar alcohols. High-solids coating solutions must be kept hot and are subject to discoloration. Application can be challenging because they can crystallize and harden quickly.

Fruits, such as raisins, have been added to cereals for many years, but in the search for new products, other inclusions, such as nuts, freeze-dried fruit, yogurt, and granola (a cereal mix itself) have been added. These create processing challenges in feeding at correct rates, prevention of segregation, matching moisture activity, and preventing creation of fines.

Raisins and cereal flakes, for example, are quite different in water activity, so that when enclosed in a sealed package, the flakes can become soggy and the raisins dried out. Early packaging used waxed paper in cardboard boxes, which actually permitted some moisture to escape. When cereal packaging was changed to polymer liners, which are better moisture barriers, the equilibration issue became more noticeable. One solution has been to add solids to the raisins, such as sugar or cereal fines coatings, to reduce water activity.

Fines are an almost inevitable by-product of cereal manufacture and have become a useful ingredient in other products, such as breadings and coatings.

RTE cereal is an interesting food category not only for the variety and challenges of its many processes, but also for the several ways in which it can be categorized. There are cereals for adults and for children; sweetened and unsweetened; short-lived novelties and 100-year-old standards; originals and copies; whole-grain and flour-based; branded and private-label.

For manufacturers, RTE cereal has been profitable, challenging, and a source of technical accomplishment. For consumers, it continues to be nutritious, enjoyable, and generally a good value.