Water activity has become an important criterion for the evaluation and control of food safety and quality, says Theodore P. Labuza, Morse Alumni Distinguished Professor of Food Science and Engineering in the Dept. of Food Science & Nutrition at the University of Minnesota, St. Paul ([email protected]). 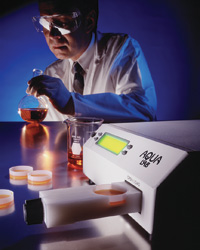 "Water activity’s usefulness as a food quality and safety measurement tool was first suggested during the 1950s when it became obvious water content could not adequately account for microbial growth limitations whereas water activity did," Labuza relates.

In the 1960s, researchers showed that water activity was also important to the rates of chemical deterioration in foods.

Despite its significance, water activity is still a misunderstood, sometimes unappreciated, and even controversial concept. "It’s important to educate scientists about the value and proper use of water activity as a quality and safety measure," Labuza says.

Water activity (aw) is defined as the equilibrium property of water at a given temperature and moisture content. It is related to a measurement of a thermodynamic property of water in a product (i.e., its energy/mole). It is further defined as the ratio of the water vapor pressure over a sample (p) to that over pure water (p0) at the same temperature: aw = p/p0. The relative humidity in the air that is in equilibrium with the water in a food (%ERH) is 100  p/p0 or 100  aw.

"Since water activity describes the continuum of energy states of the water in a system, it is improper to divide water into categories defined as "free," "bound," or "available" water, as concluded in 2000 by a panel of experts on water activity," Labuza relates (see www.ardilla.umn.edu/Ted_Labuza/Isopow8_WaterInFood_panel.pdf). "They noted that one should rather base its use as critical values above or below which certain physical or chemical states exist, for example, no microbes can grow below an aw of 0.6."

What aw Is Not
Water activity is not the same as water content, which is the quantitative amount of water in a sample on a wet or dry basis:
m = g water/100 g solids

where m is the moisture content a product would reach at equilibrium at a given relative humidity and temperature.

"The relationship is complex," Labuza emphasizes. "The amount of water adsorbed and resultant aw depends on the concentration and type of solutes, the pore size distribution, and the interaction of water vapor with hydrophilic sites of the matrix—proteins, starch, cellulose, etc. An increase in aw as water content increases generally shows a nonlinear sigmoid (S-shape) (Figure 1). This relationship at a given temperature is called the moisture sorption isotherm. 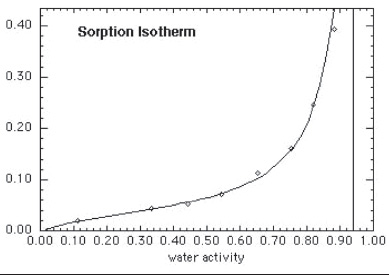 "What the isotherm allows one to do is determine the water content at certain critical aw values related to stability and safety," Labuza says.

"From the aw vs moisture content data of an isotherm, there is a simple equation—the Brunauer Emmet Teller (BET) equation—that allows one to calculate the monolayer moisture value," Labuza adds. "This limit applies to enzyme activity, lipid oxidation, nonenzymatic browning, and many other reactions that impact quality, such as degradation of vitamins and changes in color, taste, and aroma. Of critical importance is that lipid oxidation still occurs at the monolayer and the rate of oxidation increases again at lower moisture content. So for most dehydrated foods, the monolayer moisture value is the point for maximum shelf life. This was the basis of the aw stability map (Labuza et al., 1969)."

Importance of aw
"Clearly, aw is a critical factor that determines the shelf life of food along with temperature, pH, and several other factors," Labuza says. "It allows one to predict stability with respect to physical properties like texture and caking, rates of deteriorative reactions, and microbial growth."

According to Labuza, research over the past 40 years has led to the following critical aw values of importance:
• The 0.2–0.3 aw range is that in which the monolayer moisture occurs, which represents the optimal moisture content region where dehydrated foods have the maximum shelf life. Above the monolayer, chemical reactions that require a water phase begin.

"Below this aw region or the Tg for a given moisture content, a material is glassy or brittle/hard, while above it the material is rubbery, from leathery to soft," Labuza elaborates. Knowing the isotherm slope and the package’s permeability to moisture, one could predict the time it takes for the loss of crispiness of packaged potato chips stored at different external relative humidity values (%RH) to occur.

"For multidomain foods with regions of different aw, it is the difference in the aw of two domains that drives the water transfer from the higher region to the lower," Labuza explains. "A holy grail in the processed food area is to find a means to retard such transfer and maintain separate crisp vs soft domains. The chocolate coating on the inside of the cone, which separates the cone (aw ~ 0.2) from the ice cream (aw 0.85) portion of a frozen novelty is one such example where an edible barrier is used to help the cone remain crisp."

• The 0.6 aw critical point is the point at which there is the potential for growth of microbes if the moisture content increases.

• The 0.6–0.8 aw range is that in which, for intermediate-moisture foods such as chewy granola bars, or soft, moist pet foods, the rates of chemical reactions that require an aqueous phase and deteriorate foods reach a maximum and then fall at a higher moisture content.

"This is because, at these high aw levels, a small increase in aw means a large gain of moisture," Labuza says, "causing dilution of the reactants in the adsorbed aqueous phase." Since the rate of reaction is a function of concentration, the rate falls as in the Maillard reaction between reducing sugars and protein. Formulating a food to have an aw above the 0.6–0.8 range to lower rates of chemical reactions such as nonenzymatic browning or to make it softer could result in the growth of bacteria spoiling the food."

• The 0.85 aw critical point is the point above which bacterial spoilage occurs and pathogens begin to grow.

The Food and Drug Administration’s 2005 Food Code amends the definition of potentially hazardous foods as those that have a finished equilibrium pH greater than 4.6 and an aw greater than 0.85 and can support the growth of pathogens. Two pH and aw interaction tables were added to the definition of food that requires time/temperature control for safety to limit pathogenic microorganism growth or toxin formation (Tables 1 and 2).

According to Chapter 21, Section 113 of the Code of Federal Regulations, FDA also requires that if the aw of a thermally processed food is greater than 0.85 and the pH is greater than 4.6, the process must deliver a minimum of a 12-log-cycle kill for Clostridium botulinum.

Measuring aw
The aw of a food can be determined from the relative humidity of the air surrounding the food sample when the air and the sample are at equilibrium. 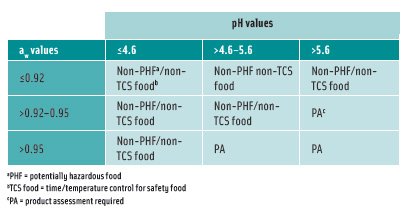 In all water activity instruments, the food sample is placed into a closed space in which the air equilibrates with the sample. The smaller the space, the faster the equilibration occurs at constant temperature. The instrument then measures properties of the air/water or has a sensor that must also pick up moisture from the air/food and reach the same %ERH or aw. This can be done with chilled-mirror dew-point technology, while the other commercially available technology measures the change in electrical resistance or capacitance of the sensor due to moisture pickup. 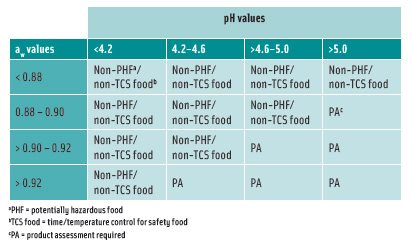 The major advantages of the chilled-mirror dew-point method are accuracy, speed, ease of use, and precision, Fontana says. "The AquaLab’s range is from 0.030 to 1.000 aw, with a resolution of ±0.001 aw and accuracy of ±0.003aw. Measurement time is typically less than 5 minutes because only the air space and the food need to equilibrate."

Capacitance sensors have the advantage of being inexpensive, but they are not typically as accurate or as fast as the chilled-mirror dew point method, Fontana continues. "Capacitive instruments measure over the entire aw range, 0–1.00 aw, with a resolution of ±0.001 aw and accuracy of ±0.015 aw," he explains. "Some commercial instruments can measure in 5 minutes, while other electronic capacitive sensors usually require 30–90 minutes to reach equilibrium relative humidity conditions."

• Chilled-Mirror Method. With AquaLab instruments, a sample of food is equilibrated within the headspace of a sealed chamber containing a mirror, an optical sensor, an internal fan, and an infrared temperature sensor. At equilibrium, the relative humidity of the air in the chamber is the same as the aw of the sample. A thermoelectric Peltier cooler precisely controls the mirror temperature. An optical reflectance sensor detects the exact point at which condensation first appears.

A beam of infrared light is directed onto the mirror and reflected back to a photodetector, which detects the change in reflectance when condensation occurs on the mirror. A thermocouple attached to the mirror accurately measures the dew-point temperature, and a thermopile sensor (infrared thermometer) measures the dry-bulb temperature (i.e., the sample temperature). An internal algorithm, based on the psychrometric chart of air–water properties, then calculates the aw.

"Since the measurement is based on temperature determination, calibration is not necessary, but measuring a standard salt solution checks proper functioning of the instrument," Fontana says.

• Capacitive Sensor Method. Decagon Devices; Rotronic Instrument Corp., Huntington, N.Y. (www.rotronic-usa.com); and NovaSina, Pfäffikon, Switzerland (www.novasina.com), manufacture capacitance instruments. These tools use a sensor made from a hygroscopic polymer and associated circuitry that gives a signal relative to the ERH. This ERH is equal to sample aw only as long as the temperatures of the sample and the sensor are the same.

In addition to speed and accuracy, other important considerations to take into account when selecting aw measurement devices include how susceptible the sensor is to contamination from volatiles such as ethanol or propylene glycol and how frequently calibration is required.

"When comparing aw instruments, it’s important to evaluate precision and accuracy over the entire range of aw most commonly found in your specific products," Fontana advises.

Temperature changes can affect aw, with an aw increase as temperature increases," Fontana says. "And temperature can have a profound effect on the state of that matrix, glassy vs rubbery state, for example. The effect is negligible in high-moisture foods."