Since their wide-scale commercial introduction in 1996, crops improved through biotechnology have been bringing benefits to farmers and the environment in regions throughout the world. Now, after a decade of rapidly expanded grower adoption of biotech’s agronomic traits, a new wave of biotech crops is introducing benefits for consumers, livestock producers, and grain processors, as well as more traits to improve agricultural productivity and the environment. 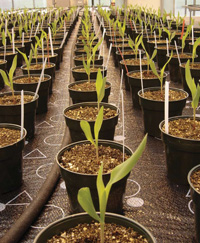 By almost any reasonable standard—whether pesticide reduction, increased yields, improved efficiency, or environmental benefit—the first generation of biotech crops have been a success. According to a study of the agricultural impact of biotechnology in America (Sankula, 2005), biotech crops enabled United States farmers to eliminate 62 million lb of pesticides in 2004. If we extrapolate over the 10-year history of biotechnology, hundreds of millions of pounds of pesticides have been eliminated, and many millions of gallons of fuel have been conserved as farmers make fewer trips over their fields. Biotechnology has allowed farmers to adopt conservation tillage, which protects the soil from erosion, provides food and cover for wildlife, and keeps sediment out of our streams. Furthermore, according to the study, U.S. growers realized an additional $2.3 billion in income in 2004—just that one year alone—because of the improved yields and reduced costs associated with biotech crops.

In 1996, biotech crops were planted on about 4 million acres, primarily in the U.S. Today, 10 years later, they are planted on 220 million acres in 21 countries around the world (James, 2005)—about 210 million acres are for food crops and the other 10 million for cotton (which also provides cottonseed oil used in food). Today, about 8.5 million growers plant biotech crops because they see benefit and value. In 2005, the U.S. ranked first in the world with 123 million acres, but 90% of the farmers planting biotech crops were located in low- to medium-income countries, solid evidence that biotech crops create benefits for farmers regardless of the relative size of their farms. By 2010, experts predict, global acreage will increase to 371 million acres, nearly doubling today’s level. This is a phenomenal acceptance of a technology that obviously has brought benefit to those who use the products.

Improving Crop Yields
Biotech crops first appeared in 1992, when China introduced a virus-resistant tobacco. This pioneering event was followed by the FlavrSavr™ tomato in 1994. These niche products were planted on a very limited scale. In 1996, however, herbicide-tolerant soybeans and canola (Roundup Ready™) and corn (Liberty Link™) and insect-protected cotton (Bollgard™) were planted on about 3.6 million acres during their introductory year.

Herbicide-tolerant crops (soybeans, corn, canola, and cotton) allow farmers to improve their weed control and thus increase yields. In many cases, growers are able to use one broad-spectrum herbicide that controls nearly all their weed species, instead of multiple weed-specific herbicides to control the entire spectrum. Growers reduced their herbicide usage by about 6% between 1996 and 2004 (Sankula, 2005). Today, Roundup Ready seeds are planted on more than 90% of soybean acres, 91% of canola acres, 50% of corn acres, and 75% of cotton acres in the U.S., as well as 81% of the canola acres in Canada.

In 2005, the herbicide-tolerance trait was added to alfalfa, and other improvements in herbicide tolerance are in development. Second-generation herbicide-tolerant crops are on the way, with increased yield and continued, superior weed control. In addition, new herbicide-tolerant modes of action, such as dicamba tolerance, will add additional tools for broader control and improved weed-resistance management.

Insect-protected crops, primarily corn and cotton, have enabled growers around the world to reduce their use of chemical insecticides and greatly improve their insect control and yield. The seeds contain a protein from a naturally occurring soil bacterium, Bacillus thuringiensis (Bt), which is fatal to targeted insects but harmless to most other insects, wildlife, and humans. The first iteration of insect-protected corn targeted the European corn borer. A second-generation product targets the corn rootworm. In corn-growing regions where both insects are a threat, growers can purchase seeds that control the underground root pest, as well as the stalk- and ear-feeding corn borer. These traits can also be “stacked” with herbicide-tolerant traits.

A third generation of insect protection is in advanced stages of development. This product will expand the spectrum to control armyworm and earworm so that a corn grower can protect his or her crop against nearly all of the most critical yield-robbing corn pests, with little or no reliance on chemical insecticides. Such a product used in sweet corn production could eliminate 10 or more insecticide sprays per growing season (Gianessi, 2002). In field corn production, Bt corn can reduce by more than 90% the amount of unhealthful mycotoxins that form when insects feed on corn grain (Munkvold, 1997). Efforts are now underway to bring insect-protection benefits to soybeans.

While insect protection and herbicide tolerance have been the dominant agronomic traits of the past decade, the next wave of innovation will add traits such as drought tolerance to soybeans, corn, cotton, and other crops and improved nitrogen utilization in corn. Field trials with drought-tolerant corn have demonstrated a 10% percent yield advantage in typical cropping scenarios and up to 30% more yield compared to conventional hybrids in severe drought conditions. Successful development of such products can benefit growers in nearly every corn-growing region, all of which experience some periods of low rainfall. In arid regions that rely on irrigation, drought-tolerant crops can reduce the agricultural demand for precious water resources.

Second only to water, nitrogen is the next most important nutrient for crop growth, so any product that aids in the efficiency of nitrogen use will have some obvious performance benefits at the farm level. Proof of concept has been established, and work is underway toward a goal of achieving a 10% yield increase with 50% less nitrogen fertilizer. This would not only increase growers’ bottom line but also improve the environment by reducing nitrogen fertilizer runoff into streams.

Biotech researchers also are exploring crops improved to control root-destroying nematodes, a devastating pest that currently is controlled by applying toxic soil fumigants. Companies and universities also are exploring crops that are more tolerant of salty soils or able to grow in cooler climates. Virus-resistant squash and papaya already have been introduced, and more crops capable of fighting off harmful viral diseases are on the near horizon. These and other improvements in the biotechnology pipeline will continue the efforts of the past decade to help farmers produce food.

Improving Food, Feed, and Fuel
Clearly, the focus on farmers has not diminished, but now there is an additional focus that will bring nutritionally improved crops for people and livestock.

Consumer research continues to show that people want to take control of their health. They want to eat healthful foods, but they don’t want to give up taste and convenience. If food producers can improve what people already are consuming, without altering the taste or texture, consumer demand should follow. This involves dialogue with all stakeholders in the food chain. It involves seed producers sitting down with food manufacturing companies to ask them what they would like to have to improve their products and to meet customers’ needs.

The first of these new crops has entered the market, and more are in development. Low-linolenic soybeans were introduced in 2005. Also now available, although on fewer acres, are a naturally stable sunflower and a low-linolenic canola oil. These crops produce oils that do not have to be partially hydrogenated, thereby reducing trans fatty acids. Adding hydrogen is necessary to keep certain oils stable, but the process results in trans fats. As research increasingly has raised health concerns about trans fats, the Food and Drug Administration now requires food manufacturers to list the amount of trans fats on their labels. To avoid such listing, some manufacturers have switched to oil from new low-linolenic soybean varieties, which enable them to continue using soybean oil while avoiding trans fats and high amounts of saturated fats that substitute oils contain. Last year, Kellogg Co. announced that it would switch to oil from Monsanto’s Vistive low-linolenic soybeans. The trend toward healthier oils continues to grow among food companies and the foodservice sector.

The improved soybean, canola, and sunflower oils allow consumers to avoid trans fats, reduce saturated fats, and still have the taste and texture they like. America’s farmers are delighted, too, because they will not lose valuable markets to imported palm oil or other oils.

The next line of oil improvements through biotechnology will contain a lower level of saturated fat, higher levels of heart-healthy monounsaturated fat, and lower linolenic levels for increased stability. With this improvement, soybeans, which already have a comparatively low level of saturated fats, would have an even lower level as well as improved cholesterol-lowering ability. These combined improvements could result in soybean oil with healthful properties comparable to those of olive oil. But the soybean oil, which represents two-thirds of the food oil consumed in America, would be much more plentiful, available at a lower cost, and still have the familiar desired taste and texture.

Improving this already healthful product has great potential to enhance public health. Introducing the health benefits of omega-3 fatty acids into soybeans is one example. Omega-3 fatty acids, now available by consuming fish and fish oil, are recognized for their beneficial cardiovascular effects. Scientists have identified and isolated the plant gene that produces omega-3s and put it into soybean plants. Tests with these improved soybeans show comparable yields to other varieties, but 20% of their fatty acid content is stearidonic acid, a key omega-3, compared to virtually none in regular soybeans. Soon, instead of eating more fish or consuming fish-oil supplements, consumers can have this important material in a variety of foods.

Crop improvements can benefit livestock as well, and biotech companies are developing products for improved animal health. Renessen, a joint venture of Monsanto and Cargill, is developing a line of branded crops (Mavera™ high-value corn and soybeans) that contain higher levels of lysine and other essential amino acids that poultry, swine, and cattle need in order to develop properly. Building in these nutrients will provide a more consistent ration and replace the need for producers to add costly supplements. Other companies are developing nutritionally enhanced corn that will provide higher energy and more abundant nutrients.

Developments are also underway to improve how crops may be used for more efficient biofuel production. Corn varieties are being created to contain amylase and higher levels of extractable starch. And as the demand for crop-based ethanol increases, many companies are developing improved corn that will increase the profitability of dry-grain ethanol plants. The improved grain can be fractionated to produce more ethanol, as well as high-value by-products such as corn oil and a nutrient-rich feed for poultry and swine. For biodiesel, new varieties of soybean and canola are being bred with higher oil levels for increased energy production.

A Bright Future
It’s not surprising that the leaders in developing the new wave of biotech foods—companies such as Monsanto, DuPont, Bayer, Dow AgroSciences, and Syngenta—trace their beginnings to agricultural inputs and chemical crop-protection products aimed at improving farmers’ yields and profits. The first wave of agronomic traits was the logical next step in the business model those companies knew and understood. Now, they are partnering with other players in the food value chain—companies such as Cargill, Bunge, and ADM—developing new business models with new ways of sharing value and developing high-value traits that food companies and grain processors have said their customers need.

The resulting products will add an entirely new dimension of benefits in the coming decade and will enable biotechnology to begin to realize its full potential in the 21st century.