It seems seasonally appropriate to talk about chocolate. Not only is there increasing recognition of the potential health benefits of chocolate resulting from its high concentration of phytochemicals and antioxidants, but also manufacturers are introducing new products with dark chocolate, single-origin cocoa, fair-trade cocoa, and higher concentrations of cocoa. Furthermore, cocoa processing to make chocolate is one of the few examples I know where there are multiple paths or potential fl owsheets, most of which are in use. 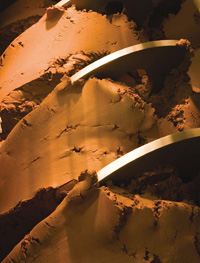 In processing generally and specifically in food processing, there usually is one best way to accomplish some desired end. This is usually discovered incrementally over time, and all manufacturers eventually arrive at the same conclusion. With regard to chocolate, this is not the case. The other example of which I am aware is low-calorie beer, for which there are at least seven processes, all of which someone uses—that is a story for another time.

Chocolate is an old food, discovered first by the Aztecs of Mexico and brought to Europe by the Spaniards. Now cocoa beans are grown in many tropical places, including Africa and South America. Cost and quality can vary widely. Traditionally, cocoa beans from several sources have been blended to achieve a consistent flavor and to control costs. Cocoa farmers tend to be small and poor and have not always received a fair price for their crop. Fair-trade cocoa refers to an effort to help producers receive a higher return, responding to consumers’ appreciation of the issue and their willingness to pay a higher price for the final products.

Single-origin cocoa recognizes that consumers can appreciate the subtle flavor differences among beans grown in various areas, even among different estates. An origin might be a region of the world, a country, or a single farm, according to Richard Benson, Director of Research & Development, North America for Barry Callebaut, Chicago, Ill. (phone 312-496-7300). Barry Callebaut is the largest manufacturer of chocolate and has plants all over the world. It manufactures a wide range of cocoa and chocolate products mostly used as ingredients by other food companies and in foodservice by chefs. Benson says that his company trains about 500 chefs a week in the culinary use of chocolate. One lesson, then, from chocolate is the potential for market segmentation, as contrasted with the more common objective of consistency in flavor.

Steps in Processing
Chocolate flavor development begins shortly after harvest. Cocoa beans are found in a fleshy fruit that is collected from trees about twice a year. The fruits are cut open and the seeds spread in a thin layer on the ground to ferment and dry in the sun. As the fruit flesh disappears and the seeds dry, their color changes and their characteristic aroma develops. The seeds are typically packaged in 60-kg jute bags and sold through cooperatives, government agencies, or directly to manufacturers, depending on the country and local practice.

Depending on whether a single-origin or certified product is being made or not, beans from one or several sources are blended according to a company’s recipe before roasting. The cocoa beans consist of a hard shell and a softer nib on the inside. Beans can be roasted before or after removing the shell. There are advantages and disadvantages of each approach, giving rise to one of the steps for which there are process alternatives.

If the shell is removed before roasting, there is less loss of valuable cocoa butter. The roaster is also used more efficiently, as only nibs are handled. On the other hand, the shell is easier to remove after roasting. A compromise process heats the whole beans to dry the shell and make it easier to remove, then the nibs are roasted. This introduces an additional piece of equipment.

After roasting, the nibs are ground to a fine slurry such that the suspended particles are too small to be detected by the tongue. Grinding may be on a multiple roll refiner, in which up to five polished steel rolls are mounted in a stack very close together and the slurry passes from one to another until the desired particle size is achieved. The suspended particles are cocoa, and the liquid is cocoa butter, a unique vegetable oil. Cocoa butter gives chocolate one of its special sensory properties, its ability to melt just at body temperature, because it has a sharp melting point of about 37°C.

The slurry is known as chocolate liquor and is one component of chocolate. Additional cocoa butter, sugar, milk powder (for milk chocolate), lecithin as an emulsifier, and other flavors can be added to make a fi nal product. To get additional cocoa butter, chocolate liquor is filtered under high pressure (because of the fineness of the particles), yielding cocoa powder as press cake and cocoa butter as filtrate. It is important to reduce the cocoa butter content of the cocoa powder as much as possible, because it is the more valuable product, so the press cake may be extracted with solvent or it can be ground up to yield a cocoa powder with a residual fat level (say 10–24%) that is appropriate for a final application.

The cocoa powder is an important product for making chocolate drinks, compound coatings, confections, and other foods. The solubility and color of cocoa powder can be modified by the addition of a particular alkali to the cocoa liquor or to the press cake, leading to another set of alternative process options, namely, use alkali (and which one) or not, and add it at various points if used.

The chocolate mass then undergoes a process unique to chocolate, conching. This typically occurs in a mix muller, a large vessel with rotating mixing arms that resembles a mixer/grinder. During conching, heat is generated, which helps to drive off some residual moisture and volatile flavors. Almost certainly, some chemical reactions occur among the various compounds present, including caramelization of sugars, Maillard or browning reactions between proteins and sugars, and probably others. There may be further size reduction.

Efforts have been made to significantly shorten the time of conching or to separate some of its functions, such as evaporation, because conching of high-quality chocolate can take many hours and requires some skill. So far as I know, most such efforts have not succeeded. Another lesson, one also seen in the aging of cheese, wine, and whiskey, is that some processes just cannot be accelerated successfully. In the case of chocolate, the high viscosity, relatively low temperature, and mild agitation means that the reactions will occur slowly because diffusion is so slow under these conditions. At the end of conching, additional cocoa butter is added to control the final viscosity of the chocolate, depending on its intended use.

Chocolate is used in candy bars, as an enrobing for ice cream, as a coating for baked goods, as a sauce, and as an ingredient. Barry Callebaut and other chocolate companies supply chocolate as liquid in bulk, as slabs or blocks, as drops or small pieces, and in other solid forms.

For most uses, chocolate must be tempered, which means heating carefully to a high-enough temperature to melt all forms of cocoa butter, which can crystallize in two forms, one of which is unstable and can cause visual defects in candy. Chocolate is then maintained at the proper temperature in use by circulating through double-walled tubing heated by hot water. Storage tanks are also double walled, agitated slowly, and heated.

Uses for Chocolate
A major use of chocolate is in confections made by such companies as Mars, Hershey, and Cadbury—the three largest—and Werther, Lindt, and many others on a smaller scale. The largest companies tend to make their own chocolate from beans, while smaller companies buy from firms such as Barry Callebaut, Blommer, and others. However, there has been a growing trend for larger companies to outsource their chocolate supplies, allowing them to focus resources and assets on their consumer brands and their marketing, according to Benson. Some of the processes used by candy companies include shell molding, enrobing, panning (discussed in the Processing column last month) and molding.

For less-expensive uses, such as enrobing baked snack cakes or cookies, compound coatings are made by mixing cocoa powder, sugar, emulsifiers, and a compatible vegetable fat that has melting properties similar to those of cocoa butter. Such fats are made by partial hydrogenation or fractional crystallization. In Europe, it is permitted to add up to 5% of such fats to chocolate, primarily as a cost reduction, and still call the product chocolate. There is a movement to allow this practice in the United States, which is controversial. Some manufacturers want to offer their customers a choice and the potential cost advantage, while some users, such as Mars (which is also a manufacturer), have stated their opposition. Another lesson might be that standards of identity can be contentious.

Chocolate is not only one of our favorite flavors, an important article of international commerce, and a healthy indulgence, but also a fascinating subject of complex processing.