Although thousands of mycotoxins—toxins produced by molds—exist, only a few present significant food safety challenges. Among the most prevalent mycotoxins are aflatoxin, patulin, ochratoxin, zearalenone, fumonisins, and trichothecenes, including deoxynivalenol (DON) 3-acetyl DON, T-2 toxin, and nivalenol. These are discussed thoroughly in the Institute of Food Technologists’ Scientific Status Summary, “Food Mycotoxins: An Update” (visit www.ift.org and click on “Research, Reports & Policy”). Because of space limitations and the fact that the most widely tested-for mycotoxin is aflatoxin, this article will focus on testing for aflatoxins. 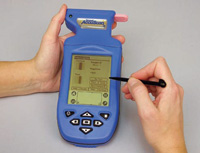 Aflatoxins are toxic metabolites of the molds Aspergillus flavus and Aspergillus parasiticus. They are designated as G2, G1, B2, and B1, with B1 being the most toxic and abundant. M1 is the predominant metabolite of aflatoxin B1 (AFB1) in milk from lactating humans and animals consuming AFB1-contaminated food or feed.

These toxins occur in a wide range of foods, including peanuts, corn, cottonseed, Brazil nuts, pistachios, spices, copra, and figs, around the world. They are an ever-recurring problem dependent on weather, country and region, and type of commodity. Because of their toxicity, most countries have established upper limits for aflatoxins in foods and require testing for compliance, and methods for their analysis are continually being improved. Various approaches are being developed, including laboratory assays and rapid test kits, and there are even attempts to utilize electronic noses in their detection.

There are three common types of commercially available tests: enzyme-linked immunosorbent assays (ELISAs), which utilize microtiter wells; lateral-flow devices, similar to pregnancy-test devices, that use antibodies; and purification columns such as antibody-based affinity columns or solid-phase columns, which are followed by fluorometric analysis of the eluted extract or further analysis by high-performance liquid chromatography (HPLC) or gas chromatography (GC).

According to Stephen P. Powers ([email protected]), Director of Research and Development, VICAM Group of Waters Technologies, Watertown, Mass., the needs of the market for mycotoxin analysis are extremely varied, and his company constantly strives to improve testing products suited to these different needs.

For the majority of companies that need a rapid, simple, and precise quantitation of aflatoxin and other mycotoxins, he said the workhorse is still the fluorometer used with immunoaffinity columns. It is an inexpensive instrument that offers sensitivity, simplicity, and speed. For those companies that are receiving freshly harvested commodities and may only require a qualitative pass/fail test for a single mycotoxin such as aflatoxin, this test allows for rapid acceptance or rejection of a load and for segregation of the commodity for different purposes such as human or animal consumption.

The company recently introduced rapid lateral-flow immunoassays—AflaCheck™ and DONCheck™. These strip tests—similar to the pregnancy test dipsticks—require no instrumentation to read; they tell the user visually whether a sample is or is not contaminated above a specified level of aflatoxin.

As commodities travel through the processing chain, the requirements for analysis become more stringent and require quantitative results. Since varied commodities may be incorporated into a finished product, it may be necessary to test for several different mycotoxins in the same sample. So for the user who requires high-sensitivity analysis of multiple mycotoxins, he said, the company is launching its MYCO6in1 immunoaffinity column. This column contains antibodies to six different families of mycotoxins—aflatoxins, zearalenone, ochratoxin A, DON, fumonisins, and T2.

When a sample containing any of these mycotoxins is passed over the column, the mycotoxin is captured by the antibodies and subsequently eluted by passing methanol over the column. The collected mycotoxins can then be quantitated by ultraperformance liquid chromatography (UPLC) or HPLC and mass spectrometry (LC/MSMS). While the company’s single-mycotoxin columns can also be used for this purpose, he said, the MYCO6in1 allows the determination of all six families of mycotoxins from a single sample preparation.

According to Tony Lupo ([email protected]), Manager, Mycotoxin Technical Services, at Neogen Corp., Lansing, Mich., ease of use is critical in the testing industry. The faster and easier a particular method is, the more attractive it becomes. Neogen specializes in lateral-flow-based technology. For aflatoxin, the company’s most recent kit is its semiquantitative lateral-flow-based AflatoxinReveal SQ. It allows the user to report not simply whether the sample is positive or negative for aflatoxin but also which range of concentration it falls into—0–10, 10–20, or > 20 ppb.

The kit is simple to use. After the dipstick test strip has developed for 5 min, it is inserted into the company’s new handheld AccuScan™ lateral flow reader, which interprets and stores results from any of Neogen’s Reveal tests—greatly simplifying the tracking and analysis of objective test results. Lupo said that it basically takes a digital photo of the results, giving the user the opportunity to archive the results, showing exactly what the results looked like when first obtained, instead of fading over time. Having a photo is very useful, he said, since it eliminates user interpretation—it tells whether the sample was positive or negative and how much was there (0–10, 10–20, or > 20 ppm). In other words, it does all the interpreting. And the files can be shared by e-mail among quality control professionals, e.g., sent from field locations to a central location.

Antibody quality is critical, he added. If the antibody used is of poor quality, it won’t provide reproducible results. His company has done a great deal of work in this area over the past decade, perfecting the reproducibility of the platform. Since a very reproducible signal from the test strip to the reader is necessary, Neogen uses colloidal gold as the signal detector in the strip. It detects total aflatoxin (B1 + B2 + G1 + G2).

In the area of reference testing, Gutscher said, there is a clear trend away from classic HPLC analysis to LC-MS/MS analysis. The latter allows highly reliable and accurate multi-toxin analysis, and according to Gutscher, Romer is the only company that provides ready-to-use multi-toxin kits for LC-MS/MS analysis.

According to Gutscher, increasingly strict aflatoxin regulations, especially in the European Union, where the limit for total aflatoxins is 4 ppb, require fast test methods that comply with these regulations, and he said that Romer is currently the only company providing a lateral-flow device that complies with 4-ppb regulations in less than 5 min.

by Neil H. Mermelstein,
a Fellow of IFT,
is Editor Emeritus of Food Technology
[email protected]