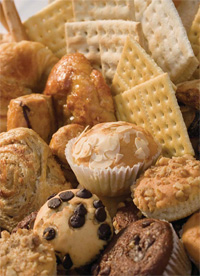 “That’s because the definition of total dietary fiber has changed over the years, and it varies from source to source,” she explains. “The Association of Analytical Communities (AOAC)-approved method we use in our lab, Method 991.43, Total, Soluble, and Insoluble Dietary Fiber in Foods, does not necessarily measure all the entities some people now consider to be a fiber source. It would be so useful to have a comprehensive test for all sources of fiber and have it be universally accepted.”

In the early 1970s, Hugh Trowell and colleagues determined that, “dietary fiber consists of the remnants of edible plant cells, polysaccharides, lignin, and associated substances resistant to (hydrolysis) digestion by the alimentary enzymes of humans.”

Among the analytical methods used for the determination of food components that are subject to nutrition labeling, those used for the measurement of dietary fiber have undergone the greatest transition in recent years, DeVries says.

“Because of its heterogeneous nature, dietary fiber is difficult to measure by direct instrumental means, therefore, we need to rely on more-complex gravimetric methodology that simulates human digestion,” he points out. “While the AOAC has kept pace in adopting Official Methods of Analysis that are consistent with the definition as well as, in many cases, adopting Official Methods of Analysis for specific. dietary fiber components, the historical and continuing interest in functional attributes of dietary fiber adds another layer of complexity to the situation.”

The subject of dietary-fiber analysis remains controversial because of the development or isolation of new high-fiber ingredients and products, the increasing emphasis on the physiologic functions of dietary fiber, and a lack of agreed-upon methods for defining and quantitating these functional effects, DeVries emphasizes.

“As interest in harmonizing food labels throughout the world increases, the need for a single, harmonized definition also increases,” DeVries notes. “To provide such a definition, recent activities include those of the American Association of Cereal Chemists (AACC) in 2000 and 2001, the Food and Nutrition Board of the Institute of Medicine (FNB/IOM) in 2002, and, most recently, the Codex Alimentarius Committee on Nutrition and Foods for Special Dietary Uses (CCNFSDU).”

It has been recognized for many years, DeVries continues, that international harmonization generally results in a reduction in both trade and commerce disputes or, at the very least, a reduced cost of food production due to the elimination of multiple regulations and multiple labeling requirements.

ALINORM 06/29/26
ALINORM 06/29/26, published in 2006 by CCNFSDU, reports on CCNFSDU’s latest draft about an internationally harmonized dietary fiber definition. “The definition is a result of several years of deliberation and consensus-building that has resulted in a definition grounded in the historical definition of Trowel et al., and represents the scientific research results on dietary fiber since that time,” DeVries says.

ALINORM 06/29/26 defines dietary fiber as follows: “Dietary fiber means carbohydrate polymers with a degree of polymerization (DP) not lower than 3, which are neither digested nor absorbed in the small intestine. A degree of polymerization not lower than 3 is intended to exclude mono- and disaccharides. It is not intended to reflect the average DP of a mixture.”

Elaborating on the phrase carbohydrate polymers, ALINORM 06/29/26 states that when derived from a plant origin, dietary fiber may include fractions of lignin and/or other compounds that are associated with polysaccharides in the plant cell walls, if these compounds are quantified by the AOAC gravimetric analytical method for dietary fiber analysis.

Fractions of lignin and the other compounds (proteic fractions, phenolic compounds, waxes, saponins, phytates, cutin, phytosterols, etc.) intimately “associated” with plant polysaccharides are often extracted with the polysaccharides in the AOAC 991.43 method. These substances are included in the definition of fiber insofar as they are actually associated with the poly- or oligosaccharide fraction of fiber. However, when extracted or even reintroduced into a food containing nondigestible polysaccharides, they cannot be defined as dietary fiber, the document states. When combined with polysaccharides, these associated substances may provide additional beneficial effects.

“The Codex definition, as expressed in this document, represents the state of science on dietary fiber and clearly points out what analytical methodology it should be based on,” DeVries says.

This method is based on the following definition of dietary fiber: “Dietary fiber consists of the remnants of edible plant cells, polysaccharides, lignin, and associated substances resistant to (hydrolysis) digestion by the alimentary enzymes of humans.”

“The determination of Kjeldahl nitrogen does not define protein in food products since protein is the polymer of amino acids that are unique to each food product,” he says. “Rather, Kjeldahl nitrogen, also a proximate method, is useful for quantitation of protein because its results are based on a specific. relationship between nitrogen content and the composition of the defined protein. Similarly, AOAC Method 985.29 does not define dietary fiber; rather, it quantitates the fraction of the food product that meets the definition given above, just as the Kjeldahl method is based on the nitrogen content contained in the polymers of amino acids called protein in foods.”

Adoption of an updated definition, whether from the AACC, IOM, or Codex, will have an impact on which methods are used to analyze fiber, according to DeVries. “Validating and adopting adequate methodology commensurate with nutrition science definitions has always been a challenge for the analytical community for those analytes that do not consist of a single analyte or related individually measurable multiple analytes,” he says. “With dietary fiber, there will be a need to validate and adopt methodology with optimum applicability to the definition.”

DeVries advises that nutrition scientists seeking to bring continued understanding to the complex issues of dietary fiber chemistry and function may need to rely upon currently available methodology, which is based upon the current definition, until newer methods are explored and validated.

Another issue regarding the applicability of current methods to the proposed AACC, IOM, and Codex definitions has to do with the inclusion of references to physiologic effects of fiber in each definition without proposals as to how such effects can be quantitated.

“It is clear that adoption of an updated definition will have a significant impact on food composition databases with respect to dietary fiber,” DeVries says. “Why? If functionality-attribute tests are adopted, they will have their own respective databases independent of dietary-fiber databases.”

The debate on fiber definitions and related analytical methods has gone on for quite some time. “Nevertheless, the importance of agreement on an updated definition is essential, and this can then be adopted globally,” says DeVries. “With standardization and harmonization in place, results of research on diet-disease relationships, as well as nutrient and energy intakes, will be more comparable across countries, and dietary guidelines and goals and nutrition programs will have a similar basis throughout the world.”

It is desirable to have one, all-encompassing procedure for the determination of dietary fiber in the food supply, DeVries maintains. “A single, physiologically based, chemically performed analytical method applicable to a universally accepted definition will provide the ultimate tool for labeling and research, while minimizing confusion,” he says. “A comprehensive analytical method commensurate with the Codex definition could be available as soon as the fall of 2008.”