Beverages are pressurized in their containers for a variety of reasons. Understanding these reasons and the physical phenomena involved is interesting and potentially useful in several ways. First, consider the wide range of beverages and some of the other issues that can arise. 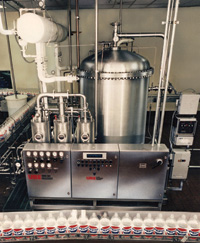 Beverages range from the simplest—water—through complex mixtures designed, not only to quench thirst and refresh, but also to provide electrolytes and nutrients. Beverages are often based on fruit or vegetable juices and can be 100% juice or less than 10% juice equivalent. The juice equivalent is shown on the label and may be calculated, if the formula uses concentrate, at the solids content of fresh juice. Flavors such as orange, grapefruit, apple, cherry, grape, and cranberry—and blends of these—are popular for juices and juice-based drinks. When a beverage has less than 100% juice equivalent, the balance is usually water, corn syrup, and citric acid with additional flavors and, sometimes, preservatives.

High-acid Drinks
Most fruit juices and blends are high-acid products, which means they can be hot-filled. Hot-filling means that the beverage is heated to about 190°F before filling into glass, plastic, or metal containers. The containers are sealed, often inverted, and held for 15–30 sec before cooling. The process sterilizes the juice, the container, and the cap, primarily targeting yeasts and molds, which could cause spoilage. Heat processing changes the flavor of some sensitive juices, and so there is interest in non-thermal processes, such as pulsed electric fields (PEF), high pressure processing (HPP), and ultraviolet radiation (UV), some of which have been discussed in this column in previous issues.

One concern with plastic containers for hot-filling is their deformation when heated. This can make capping and labeling a challenge. One solution is a heavier-weight material, but that increases cost. Some containers have a special ring near the finish, as the threads are called, which the capping machine can grip while the softened body of the bottle is left undistorted.

Aseptic packaging permits use of coated paperboard and lightweight plastic containers because the beverage is cooled before filling and the container is sterilized by other means—washing with hydrogen peroxide, for instance.

Low-acid Beverages
Some newer beverages are based on dairy products, including flavored coffee and milk blends with fruit juice. Lassi is a popular drink in South Asia, which blends yogurt and fruit puree, such as mango and guava. This beverage is often retorted in glass bottles or processed aseptically. There are some aseptic fillers for plastic bottles, but none, so far, for glass containers.

Metal Containers
Carbonated soft drinks, beer, and still beverages, such as flavored teas, are often packaged in metal cans. Traditional steel three-piece cans were relatively heavy and strong enough to support stacking of pallets full of products. However, two-piece aluminum cans are much more popular because of their light weight and easy ability to recycle. (It should be noted that steel is also recycled and that two-piece steel cans with very thin walls exist, but are not as popular for beverages. Two-piece steel cans with corrugated walls are used for retorted low-acid foods, such as soups.)

Briefly, three-piece cans are composed of a cylindrical wall (made by welding a thin sheet into a tube) and two ends (made by stamping from a ribbon of steel). A two-piece can of aluminum or steel is made by pressing a tube and bottom from a disk of metal. The walls are made thinner and strengthened by work hardening in a step called ironing, hence the common name of "drawn and ironed" for such containers. The significant point is that using less metal reduces cost. Cans are characterized by the weight per thousand cans. In addition to making walls thinner, crimping the top reduces weight by making the lid smaller.

These cost reductions mean that beverages need to have some internal pressure to provide sufficient strength in the package to withstand stacking in storage, shipping, and distribution. Fermented and carbonated beverages are pressurized with carbon dioxide, but still beverages need another source of pressure.

Carbonation
Carbon dioxide has been naturally generated by fermentation or added to beverages for a long time. It creates effervescence, the release of tiny bubbles, as it comes out of solution when pressure is released or, over time, upon sitting or stirring. Carbon dioxide reacts slightly with water to form carbonic acid, which makes it somewhat of a preservative, in addition to providing a sensory experience.

The fermentation of cereal grain to make beer and of grape juice to make wine produces carbon dioxide and ethanol. Much of the carbon dioxide is lost from the liquid during the process, but it is usually recovered, purified, and added back to beer during packaging. Fermenting under pressure in sealed bottles or larger tanks carbonates sparkling wine. Some "still" wines have low levels of carbonation added at bottling for improved sensory response.

Carbonated soft drinks are made by mixing water, sweetener, flavors, colors, and carbon dioxide just before filling into metal, glass, or plastic containers. Beer and soft drinks are usually filled cold (around 40°F) because, as we shall see shortly, low temperature enhances the solubility of carbon dioxide. However, cold glass or metal packages can condense moisture from the atmosphere. The condensation can interfere with labeling, where that is required, and could weaken corrugated paper cases. To prevent condensation, cold-filled beverages are typically warmed in a pasteurizer—a tunnel in which hot water is sprayed on the containers. Some beverages are warmed to high enough temperatures to reduce surviving yeasts and molds when necessary. Air is blown over the containers to dry them before labeling, if needed. (Cans are lithographed in manufacturing and so do not need labeling but are usually code dated before being put in cases.) One practical question is: What pressure might the warming of the containers generate? Another situation that sometimes occurs is the heating of containers of carbonated beverages in the trunk of a car on a hot day.

As an illustration of the significance of these scenarios, there were instances of an older glass container for soft drinks nearly causing injuries when it broke after being dropped. The half-gallon bottle had a polymer foam label that helped cushion it from contact during conveying on the bottling line. However, the label was very strong, so if the heavy bottle were to be dropped, the top part of the glass would be blown off like a projectile, and there were reports of it being imbedded in ceilings. Fortunately, the plastic two-liter container has largely replaced the glass half-gallon bottle.

Instead of carbon dioxide, nitrogen is added to still beverages that need internal pressure to help support the thin metal side walls of cans. In a special case, nitrogen is added to some beers to help produce an especially thick head because it produces very small bubbles upon release of pressure. Understanding the pressure and solubility behavior of carbon dioxide and nitrogen in beverages requires a quick excursion into an aspect of thermodynamics.

Gas Solubility in Liquids
The solubility of gases in liquids when the concentration of the gas in the liquid is very low is expressed by Henry’s Law, P = H x, where P is pressure of the gas in atmospheres, x is mole fraction, and H is a constant that is experimentally determined and is a function of temperature. Values of H can be found in sources such as Perry’s Handbook of Chemical Engineering. (Being a seasoned chemical engineer, mine is the third edition; there are many newer editions, but the data is the same.) It is not obvious what the relationship with temperature should be, so I tried various equations and found the following.

For carbon dioxide, Ln H = -2339(10000/T) + 15.212, where Ln means natural logarithm and T is temperature in degrees Kelvin (degrees C + 273). The correlation measure, R2 = .9955, where R2 = 1.0 is a perfect correlation. Two other equation forms also had high values of R2, so this is not the only form that fits the data pretty well, but this particular form has precedents in thermodynamics for correlating similar data. The data cover the temperature range 0–60°C, and can safely be extrapolated 10–20 degrees in either direction, I think.

There are commercial instruments that measure the pressure and temperature of evolved gas after shaking a container that has been punctured by the instrument and provide charts that convert the temperature and pressure readings to volumes of gas, at 0°C and 1 atmosphere dissolved in a volume of liquid, which is dimensionless. The relation with the previous equations is the fact that one mole of any gas takes up 22.4 liters at 0°C and 1 atmosphere. One liter of water weighs 1,000 g and is 55.5 g moles of water. (A gram mole is an amount of a pure substance equal

The correlation equations permit the calculation of the third parameter, given any two, among T, P, and x (or volumes/volume). Temperature determines H, and given x, pressure can be calculated. Often, the degree of effervescence is specified, achieved by a given addition of gas, and the required pressure is needed for process control and quality checking.