An emulsion is a temporarily stable mixture of immiscible fluids, such as oil and water, achieved by finely dividing one phase into very small droplets. Common emulsions can be oil suspended in water or aqueous phase (o/w) or water suspended in oil (w/o). There also can be more complex systems, such as oil in water in oil (o/w/o). Familiar foods illustrate examples: milk is an oil in water emulsion; margarine is a water in oil emulsion; and ice cream is an oil and air in water emulsion with solid ice particles as well.

Other food emulsions include mayonnaise, salad dressings, and sauces such as Béarnaise and Hollandaise. Most emulsions require the use of functional chemicals, called emulsifiers, to stabilize the suspension of small droplets and prevent them from coalescing or coming together to grow larger droplets. The driving force for coalescence is the reduction of interfacial area, which reduces the thermodynamic energy level of the system. Emulsifiers form physical barriers to prevent droplets from coming together. 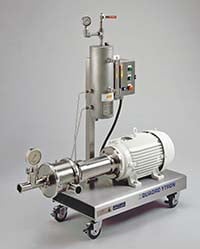 Emulsifiers
Food emulsifiers have much in common with detergents in that both classes of chemicals have water-loving and oil-loving (or attracting) regions on the same molecule. The water-attracting portion often is ionic and is described as hydrophilic. The oil-attracting, lipophilic end is often a long-chain hydrocarbon region such as a fatty acid. There are both natural and synthetic emulsifiers. Lecithin is a phospholipid molecule found in soy and isolated in refining of soy oil. It is an effective and popular food emulsifier. Egg yolk contains two emulsifiers—lecithin, which promotes oil in water emulsions, and cholesterol, which promotes water in oil emulsions. Egg yolk is the traditional emulsifier for mayonnaise and other culinary sauces, but because of its dual functionality, these products can be tricky to make successfully.

Emulsifiers are characterized by their hydrophilic lipophilic balance (HLB), a number from 1 to 20 that indicates which tendency is more dominant. An HLB less than 6 favors water in oil emulsions; a value greater than 8 favors oil in water emulsions. Values of 7– 9 indicate good wetting agents.

Other common emulsifiers found in foods include proteins, gums, and various esters of fatty acids and poly hydroxyl substrates, such as lactic acid, sucrose, and polysorbates. The mono- and di-glycerides are food emulsifiers made by transesterification followed by molecular distillation. They have different properties depending on which specific fatty acids are included.

The same chemicals that are good emulsifiers are often used in other ways in foods. For example, stearoyl lactylates and mono- and di-glycerides can retard staling in baked goods by interfering with starch retrogradation. In chocolate, emulsifiers reduce viscosity, permitting a reduction in the amount of cocoa butter, which reduces both cost and calories. Emulsifiers in cake batter promote better release of cake from pans.

Sucrose esters have been used as fat replacers, including in frying of snacks, to reduce calories. Unfortunately, in that use, the nondigestible fat replacers are said to have some unpleasant effects on one’s digestive system.

In addition to emulsifiers, other factors that affect the stability of emulsions include the viscosity of the continuous phase (higher is better), the droplet size (smaller is better, typically 1–10 μm), and the difference in densities between the two phases (smaller difference is better). Some ingredients can affect viscosity; densities are usually pretty well fixed; so droplet size becomes the one processing variable that can be manipulated.

Making an Emulsion
Emulsification involves making small droplets and having them adequately coated with the appropriate emulsifier. Making small droplets requires adding energy to create a large interfacial area. In the kitchen, this may entail vigorous beating or whisking by hand or by a mixer. In a food plant, the process may be batch or continuous using specialized equipment.

In addition to delivering energy properly, the order of addition of ingredients is critical. The correct procedure is to prepare the continuous phase, including the emulsifier, first. Then the dispersed phase is added slowly with vigorous agitation. Mayonnaise is a good example. Theoretically, uniform spheres can be densely packed to occupy 74% of a given volume. In mayonnaise, oil can be more than 74% of a formula, meaning that while it is the dispersed phase, the continuous phase is a thin film around the many oil droplets. It also means, since egg yolk is the traditional emulsifier, that the mixture runs a risk of inverting, under the influence of the cholesterol unless the mixing is carefully controlled. Specifically, oil must be added slowly so that the lecithin can thoroughly coat the small droplets.

Equipment for Emulsification
In general, emulsification equipment delivers high shear to the dispersed phase to form small droplets. One approach is the immersion mixer in which a rotor spins at high speed inside a relatively tight cage that has slots or other shaped holes. Fluid is pulled into the cage and expelled through the openings. Additional agitators may be used in a vessel to promote circulation of the mixture so all portions are treated.

Colloid mills are devices in which two plates form a narrow passage through which fluid passes. One or both plates may rotate, and there may be interlacing pins or other shear-inducing features. Usually the clearance can be adjusted and cooling may be applied for temperature control. Depending on the effectiveness of the machine for a given system, one pass may be sufficient, or the mixture may be recirculated for multiple passes. 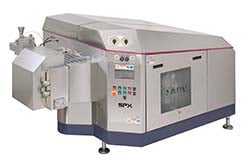 A homogenizer is a high pressure pump that forces a fluid through a restrictive valve or two to induce shear. Homogenizers are common in dairy processing and often are incorporated in a pasteurization system where they may also serve as a timing pump. As previously mentioned, fluid milk is an oil in water emulsion after being homogenized. Before that, the fat phase or cream is easily separated. A typical dairy process separates milk into skim milk and cream, then recombines these to make products of the desired fat content, including full-fat milk (3.5% fat), reduced-fat milk (1% or 2%), and skim milk (0%). Yogurt, cheeses, and ice creams of varying fat content are made the same way, by recombining the components. Excess cream is made into butter.

There are proprietary devices from such firms as APV (www.spxft.com), Silverson (www.silverson.com), and Quadro (www.quadro.com) that can emulsify continuous streams. Another approach is ultrasonics, in which a metal tool vibrates at a high frequency to introduce shear to a flowing fluid. A membrane emulsifier forces the dispersed phase through small pores into a flowing continuous phase.

Meat Emulsions
Finely chopped sausages such as frankfurters and some lunch meats are considered emulsions of fat in an aqueous phase of soluble protein, salts, and suspended particles or fibers. Such emulsions are stabilized by the addition of phosphates as well as the extracted soluble proteins. Grinders and cutters are typically used to reduce the particle sizes of meat and fat and to disperse them uniformly. Phosphates promote the extraction of protein but also coat fat particles and prevent them from coalescing. Most such meat emulsions are cooked, sometimes with smoke, to make them safe and ready to eat.

Some sausages are fermented with lactic acid–producing bacteria before cooking and drying to make distinctive products such as pepperoni and Italian salami. The bacteria produce lactic acid, lowering pH to a safe level and out competing potential pathogens (by consuming nutrients faster than the pathogens) while also contributing typical flavors. Subsequent cooking and drying further develop flavor and texture while also contributing to shelf life by reducing water activity. Thus these products in their wide variety are illustrations of the hurdle concept for food preservation: combining several inhibition steps, none of which alone is sufficient to preserve a food, in such a way that the food is safe and palatable. In the case of meat emulsions made into sausages, salt, nitrites, low pH, mild heat treatment, and reduced water activity are all involved.

Food emulsions are complex chemical and physical systems that make some of our most popular and important foods possible. On a small scale, in the kitchen, anyone can observe and experience the marvel of a successful emulsion by making their own mayonnaise or classic culinary sauce using egg yolk, olive oil, lemon juice, or vinegar and a little dry mustard. The mustard is another emulsifier, by the way, and the acid in the aqueous phase is a partial preservative. Ideally, one should use pasteurized egg yolks, which are available commercially.

Synergistic effect of probiotic and postbiotic on attenuation of PM2.5‐induced lung damage and allergic response December 4, 2022