Activity in food package structures includes signaling deterioration, spoilage, and time/temperature integration; recording history; measuring safety and quality; self-heating; and perhaps cooling. Today chemistry is the motivating energy source to generate activity. Tomorrow there may be a compulsion to apply alternative sources to power active packages. Meanwhile, food packaging that requires energy applies the principles of electrochemistry to produce heat. Among the several food packages that require energy are self-heating packages for beverages and entrees, intelligent packaging that senses and signals such events as temperature integration over time, packaging that senses biochemical changes in food during distribution, and active packaging that changes the properties of package materials in response to changes in the environment.

Providing the energy to operate the activities of food packages has been a major effort for many years. Obviously, a package can be connected to a source of electrical power, which is hardly unknown for self-heating and cooling but limits its special context. One derivative of line linkage is induction heating of a metal package component that can heat the contents but is limited geographically and also requires electrical energy. Batteries have been proposed and applied, but the expense has to date been unacceptable. Thermoelectricity via the Peltier effect derived from temperature differentials in package materials is not yet sufficient for heating but could be applied for sensing and signaling. More recently, energy has been generated from solar power, which is also limited. 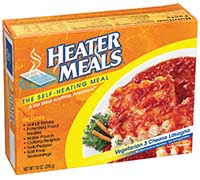 Self-Heating Food Packages
Exothermic reactions produce more energy than they require in chemical reactions (e.g., bond breaking). A common exothermic reaction is the burning of fuel. In self-heating food packaging, exothermic reactions include calcium oxide and water and magnesium salts and water. The former was used in barrier plastic beverage cans to heat coffee or hot chocolate. The latter was used to heat field rations of ready-to-eat meals in flexible pouches.

Billions of self-heating food packages have been produced and are used for military deployments, camping, and other remote expeditions. HeaterMeals (www.heatermeals.com) are well-known; their convenience may be questionable, but repeat sales indicate that consumers are more than satisfied. The retort stabilized prepared dishes are heated by combining iron, magnesium, salt, and water to produce an exothermic reaction that heats the water into which the packaged food is placed. Thermal conduction/convection from the heated water into the packaged food heats the food contents within approximately 10 minutes. 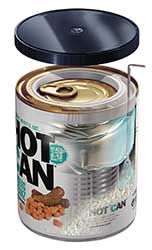 In the United Kingdom, HotCan (www.hotcan.com) is another variation on exothermic chemical reactions with a barrier plastic can-in-can containing all the elements: a food dish, water, and the chemical for heating. After puncturing three holes in the can to release the water that mixes with the chemical (in this case, processed granular limestone), consumers wait 8–12 minutes for the food contents to heat. Copper sulfate and metallic zinc could also be used to produce an exothermic reaction, but the use of toxic metals and metal salts in such close proximity to food may be questionable.

Analogous technology appears to be used for self-heating thermally insulated cans of soup, coffee, and cocoa. Such barrier cans require consumers to activate a mix of calcium oxide and water in the can. To more effectively mix the water and salt, the can must be shaken. Within three minutes, the contents are supposedly heated to serving temperature, and a colorimetric indicator signals the ready-to-drink status. Associated reports suggest that the cost of the self-heating cans is four times that of a conventional metal can. The estimate is probably not far off since the technology requires two concentric cans: one to contain the food or beverage and another external can for the heating fluid.

HeatGenie (www.heatgenie.com) is a solid-fuel technology engineered for self-heating packaging. Pressing a button at the bottom of the package activates the small heat source, generating more than 700 calories per gram of heat. Heating time for a food portion is less than two minutes. HeatGenie’s technology employs a unique solid fuel composite formulated to produce a high specific energy, conversion efficiency, and heat transfer at a controlled heating rate. The heating element contains aluminum and silica, which undergo a chemical reaction to generate heat. Aluminum can react with a source of oxygen from silicon oxide to release energy through oxidation.

HeatGenie uses a thermo-mechanical device that when activated generates a localized hot spot on the surface of the fuel that starts the oxidation reaction and creates heat. Once the fuel is spent, heating stops. The amount of heat generated and the rate that heat is released into the food or beverage can be precisely calibrated based on the mix of the fuel in the HeatGenie heater and the nature and quantity of the contained food/beverage. HeatGenie has partnered with Crown Holdings (www.crowncork.com) to commercialize the system.

Solar Power to Generate Energy
Solar power is the conversion of sunlight or any other visible light radiation into electricity, using photovoltaics. Concentrated solar power systems use lenses or mirror systems to focus a large area of sunlight into a small beam. Photovoltaics convert light into electric current. A thin-film solar cell (also known as a thin-film photovoltaic cell) is a solar cell made by depositing one or more thin layers of photovoltaic material on a substrate. Thin-film solar cells are usually categorized according to the photovoltaic material used. Many different photovoltaic materials are deposited with various deposition methods on a variety of substrates. A silicon thin-film cell uses amorphous proto-crystalline, nanocrystalline, or black silicon and is usually deposited by chemical vapor deposition, typically plasma-enhanced.

Thin-film photovoltaics can be fabricated into flexible materials to affix to package materials. In advanced applications in which electrical power is required to activate intelligence such as temperature measurement and signaling, thin-film photovoltaics might be interesting. However, an obvious obstacle is that most food packages are intentionally shaded from sunlight to avoid radiation heating, which could accelerate food deterioration. The paucity of exposure to usually ubiquitous sunlight obviates widespread application of solar energy to activate active packaging.

The challenges of solar energy draw attention to the concept of thermoelectric energy generation as a source for heating and even cooling of contents. During the 1950s, thermoelectric refrigerators were commercialized for compact spaces such as hotel and dormitory rooms. Expensive, not especially efficient, and requiring a source of electricity to be converted to direct current, thermoelectric enjoyed a bit of success as novelties. By reversing the direction of current, the energy could be applied for heating slowly but not unreasonably. Thermoelectric devices could experience resurgence as power sources for future food heating in packages.

One might argue that a more efficient temperature-time integrator or active radio frequency identification device on or in food packaging would be valuable, but is that enough to warrant the engineering of an internal electrical generator? Might a nanobattery suffice? Is such technology feasible? Might such a device be produced at an economical price? In time, the answers to these questions may or may not be what industry professionals want to hear.