Plasma is described as a fourth state of matter, joining solids, liquids, and gases. A plasma is a mixture of ionized particles, free electrons, and some neutral atoms and molecules. Because the electrons have very high velocities, they have a calculated temperature in the thousands of degrees Kelvin, but the bulk of the plasma may remain cool to the touch.

Plasmas may be created by high temperatures or by electrical discharges. The atmosphere of the sun is a very hot plasma on which the earth depends for its life-giving energy and warmth. The cool light within a fluorescent light tube also comes from a plasma, created under low pressure by an electrical discharge in an inert gas, such as argon.

With some care in electrode design and operation, a cool plasma can be created at atmospheric pressure in air, oxygen, or an inert gas. The result is a pale blue jet that does not harm flesh or other burnable surfaces upon short exposure, but which can kill surface microbes and modify surfaces. 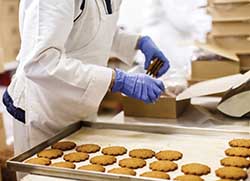 Reducing Fat in Baked Goods
One application that relies on surface modification is to enhance oil spreading on baked goods. It is common for some biscuits and crackers to have oil sprayed on their surface after baking to contribute to flavor and to help adhere salt. Such oil may contribute significantly to calories provided by the products and can be an important element of cost.

After passing through a plasma curtain, less oil can be applied because the oil spreads more rapidly and evenly, presumably because the plasma has modified the surface in some way, perhaps by making it smoother or by making it more attractive (or maybe less attractive) to the oil.

Potential Military Applications
According to Mounir Laroussi, professor of electrical engineering at Old Dominion University, rapid decontamination of clothing and gear using cold plasma could be a major military application. Laroussi is the director of Old Dominion’s Laser & Plasma Engineering Institute in Norfolk, Va. It is said that plasma could also provide a protective shield around sensitive electronics, absorb radar waves to shield aircraft, and be components of small lasers.

Laroussi’s recent research has been in plasma medicine, trying to understand the impact of plasma on mammalian cells, both healthy and cancerous. It turns out that cold plasma selectively kills cancer cells in vitro (in lab ware) and does not harm healthy cells. Applied to wounds, it kills infectious bacteria. So far the precise mechanism for such discrimination is not well understood, but it is conjectured that the difference in differentiation rate between cancerous cells and healthy cells is responsible. Rapidly dividing cells are more vulnerable to cold plasma. The free radicals in plasma trigger the cells’ internal chemical cascades that lead to cell death.

Obviously plasma medicine is an intriguing area of research, still a long way from application in humans.

Impact on Foods
While commercial applications of cold plasma to foods are not currently known, there has been interesting research hinting at the potential. One inhibition may be that there does not appear to be a commercial source of equipment. Rather, investigators typically assemble a unit from relatively simple parts.

A power supply, an electrode assembly, and a supply of gas are needed. The gas is passed through the electrodes and creates a jet in air. Typical gases are helium, oxygen, nitrogen, and argon.

Studies cited by Smetanska et al. (2013) involved the substrates, bacteria, and reductions listed here. They include the following: 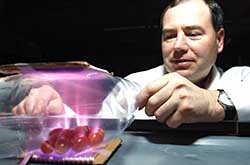 These results were obtained at electrical voltages ranging from 5.7 kV to 30 kV and frequencies of 60 Hz to 30 kHz. Exposure times, when listed, were 0.5 min to 5 min. Any reduction in spoilage microbes is likely to extend shelf life. Since pathogens have been associated with some fresh produce, an intervention that reduces health hazards while retaining food quality is certainly of interest.

Various mechanisms have been suggested for the effect of cold plasma on biological cells. There can be an ultraviolet radiation effect, acting to disrupt genes. There is the effect of free radicals oxidizing components of the cell membrane, perforating it. And, as previously noted, there can be the initiation of the cell’s own death cascade. This effect is selective for rapidly dividing cells, which explains why it would kill bacteria without harming relatively dormant plant cells in produce or healthy cells in mammals.

What Is Next?
If it is true that there is little, if any, commercially available equipment to produce cold plasma, then there would seem to be an opportunity for some firms to offer a family of units. So far, it seems, researchers have assembled their own devices. Judging by the range of conditions that have been published, these units are widely variable in their capabilities. Researchers say the equipment is relatively inexpensive—thousands of dollars, most of it for the power supply. This situation is similar to that encountered in pulsed electric fields (PEF) for much the same reason: there is little commercial demand to justify product development.

For there to be demand, there would need to be several high volume applications that offer commercial benefits and satisfy relevant regulatory requirements. Fresh fruits and vegetables are typically shipped, stored, and sold under refrigeration. Refrigerated foods must comply with good manufacturing practices (GMP) and the food safety modernization act (FSMA), but do not require a process filing, as do low acid canned foods (LACF) and acidified foods. Thus it would seem that there is no requirement for approval of cold plasma by the U.S. Food and Drug Administration before the process could be applied.

The situation is less clear in the case of meats and poultry, which are regulated by the U.S. Dept. of Agriculture. Researchers have surely tried cold plasma on meat, but I have not seen such results. By analogy to the apparent success with wound treatment, mentioned by Professor Laroussi, surface treatment of meat and poultry should reduce the burden of pathogens, which typically are just on the surface of meat until the surface is penetrated by cutting.

Current surface treatments of meat use steam, risking cooking, or chemicals, such as peracetic acid or chlorine, risking residual taste effects. Cold plasma might compete effectively if a standardized commercial unit were available.

Given the range of conditions summarized earlier, either a commercial cold plasma unit must be highly flexible, or research must identify a consensus range of conditions that are considered optimal. This would apply to voltage, frequency, electrode design, time of exposure, and choice of gas. The current literature, which is scattered among physics, electrical engineering, and food science sources, may hint at such optimal conditions, but that has not typically been the focus of research. Rather, studies have targeted the fundamental mechanisms of disinfection.

Cold plasma is probably best understood as a sort of instantaneous dry chemistry that can discriminate between harmful and healthy cells, killing the harmful ones with no residue. It is safe for the applicator and the environment. It has the minor drawback of no residue, whereas some chemical treatments offer some lingering protection against recontamination. In that respect, it should be applied just before packaging (or subsequent operations, as in meat processing), and packaging should occur in a clean environment to prevent contamination. This typically means better than normal air filtration and control of air flow.

Cold plasma has received less attention than some other novel food preservation processes, but it probably deserves more. Classic process development would call for identifying optimal conditions, developing rugged standard equipment designs, and conceiving practical process designs and applications for important product categories. Some of these include whole fresh fruit and vegetables, cut fruits and vegetables, and in-process meat and poultry.