Mike Zelkind and Tisha Livingston, indoor growers at 80 Acres Farms, are controlled environment agriculture pioneers, but don’t call them ag industry disruptors. That’s not how they see themselves—even though they’ve spent the past four years building one of the most sophisticated hydroponic farming operations in the United States. Located on the outskirts of Cincinnati, the farm has been servicing local retailers for nearly two years and will be expanded to include a new, fully automated growing facility in nearby Hamilton, Ohio, later this year.


As food industry veterans, the two have held leadership positions at major food companies, including Del Monte Foods’ Sager Creek Farms division, where Zelkind was president and CEO and Livingston served as chief operating officer. They founded 80 Acres in 2015 and devoted a couple of years to traveling around the world, studying crop science and researching growing systems.

“We’re not tech entrepreneurs who are trying to just disrupt things,” says Zelkind, CEO of 80 Acres. “We have been part of the food industry. We come from within believing that there is a much better way to do it.”

“Mike and I worked in the produce industry,” adds Livingston, president of 80 Acres. “And we knew that the way our food supply works now and the way that fresh produce gets to Ohio or to many other locations … didn’t work. And so we were looking for solutions. … We’ve looked at hydroponics, aquaponics, aeroponics. We looked at state-of-the-art greenhouses as well as open field. And we determined that hydroponics is what we consider to be the most reliable method of growing indoors right now, given where the technology is.”

How It’s Done
Housed in a former storage facility, the Cincinnati farm features multiple grow zones, each designed to accommodate the particular needs of its crops, which include lettuce, herbs, kale, tomatoes, and cucumbers.

The operation combines equipment like LED lighting from Signify and climate control technology from Priva with systems that 80 Acres’ team of engineers and data scientists developed in house. 80 Acres’ cucumbers and tomatoes are the only such crops grown completely indoors using LED lighting exclusively (no sunlight), Livingston says.

When the Hamilton facility opens its doors early in the second quarter, it will take the systems in place in Cincinnati and at 80 Acres’ satellite farms in Granite Falls, N.C., Springdale, Ark., and Daphne, Ala., to the next level, automating the process from seeding to growing to harvesting. The facility will employ robotics, artificial intelligence, data analytics, and around-the-clock monitoring sensors and control systems to optimize the growing process and produce more than a million pounds of produce annually.

“This project will deliver our proof of concept,” says Zelkind. “We feel you cannot reach real commercial unit economics unless you have a level of automation to make this business model commercially viable.”

Plants need four key things to grow—energy (from light), water, nutrients, and carbon dioxide—and the 80 Acres system has been carefully designed “to make sure that all those things are balanced in the optimal amount,” says Livingston. “If we give a plant too much light energy or too much carbon dioxide, it’s just wasted. We’re trying to balance it so that the plant can absorb it and create dry matter all at the right rate. That is a complicated math equation.”

“Farming indoors is all about managing and maintaining the environment,” echoes Zelkind. Climate control plays an essential role. Air circulates through the growing rooms precisely every 82 seconds. “If you have too much air flow, then the plant doesn’t like it, and the plant stops growing,” says Livingston. “If you don’t have enough, then the plant can’t breathe, and it can’t photosynthesize.”

When plants release water into the farm’s controlled atmosphere, 80 Acres’ systems capture it, condense it, and check the nutrient content of the salts that remain. By comparing that information with the amount of nutrients fed to the plant, the growers know precisely what amount is needed to ensure optimal growth without waste.

Keeping It Natural and Nutritious
Although the systems 80 Acres employs are high-tech, the end products are deliciously natural with grown-in-your-garden flavor, Livingston and Zelkind emphasize. “It’s using technology to get back to nature,” says Livingston. 80 Acres does not use pesticides, and none of its crops are genetically modified. 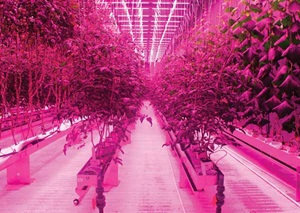 “What we do is actually almost the opposite of GMOs,” Zelkind reflects. “And I want to be clear, I’m not passing judgment on GMOs—good or bad. What I’m saying is that the concept of GMOS is [that] you’re modifying the original genetics of the plant so it can survive in whatever environment you will grow it in. … What we do is completely the opposite because we build these controlled environment grow zones, and we try to take the original genetics of plants and create a perfect environment for them to grow in.”

In fact, Zelkind continues, the beauty of growing plants indoors for local distribution is that it allows growers to put the emphasis on taste and nutrition rather than on extending shelf life. The produce grown at each 80 Acres farm reaches retailers within 48 hours of harvest.

“Stress in a plant’s life is much like in ours,” says Rebecca Haders, 80 Acres Farms vice president of creative/marketing. “There is good stress and bad. The right kind of stress at the right time in a plant’s growing cycle can produce stronger, more robust plants. We can stress plants by controlling and adjusting air flow, water, photoperiods, and light wavelengths and intensities.

“The quality of plants grown outdoors is very difficult to control,” Haders continues, “so the concentrations of the bioactive compounds may vary widely. Indoor farming provides growers the advantage of controlling the environmental factors that control plant growth and development.”

Global Ambitions
While the opening of its state-of-the-art facility in Hamilton will mark a major milestone for 80 Acres, members of the team make it clear that the company’s game plan calls for significant additional growth. “With our modular grow systems, we are able to expand current farms as consumer demand dictates,” says Haders. “We are partnering with regional and national retailers and foodservice providers to locate farms near or at their distribution centers to eliminate steps in the supply chain.” The company is exploring expansion opportunities that range from opening additional company-owned farms to building turnkey farm systems and servicing them for clients around the globe, Livingston adds.

“Our facilities represent the realization of the next generation of farming,” says Zelkind. “Our vision is to prove that indoor farming can be fully automated, commercially scalable, higher yielding, and profitable.”