The probiotics market offers great potential for manufacturers and has continued to gain momentum, despite the complex processing challenges of formulating products with these beneficial microorganisms. The bacteria often die during the food manufacturing process or during the passage to the intestine. Shelf life is unpredictable for probiotics, and the industry has had difficulty backing up label claims.

Regardless of the uncertainty of formulating with probiotics, their value is well recognized and their use is widespread in Japan and Korea in food products that claim to assist the digestion process. In Europe, probiotic applications are restricted to fermented milk products. In the United States, probiotics are found most frequently in the supplements sector and in yogurts. Manufacturers who want to expand the use of probiotics must address probiotic stability and improve survival rates to ensure actual benefits to the consumer.

What Are Probiotics?
The concept of “probiotics,” like many other revolutionary ideas, appeared long before a neologism was proposed to describe it. At the beginning of the 20th century, Nobel Prize–winning Russian scientist Elie Metchnikoff (1908) provided a thorough description of the concept based on the importance of the intestinal microflora on the general health status of the human body. According to Metchnikoff, live beneficial bacteria such as lactic acid bacteria (LAB) needed to be ingested on a regular basis through fermented dairy products, such as Bulgarian milk, now known as yogurt, to maintain a good equilibrium of the intestinal microflora and to minimize putrefactive fermentations. Several other recent definitions have also been proposed to describe probiotics, but a consensus has not been reached within the scientific community on a final definition. The most widely accepted definition in recent years is that of Fuller (1989) stating that a probiotic is a “live microbial (feed) supplement which beneficially affects the host (animal) by improving its intestinal microbial balance.” Fuller’s explanation stresses two major points—the viability of the microbial cells and their desired site of action.

Metchnikoff ’s observation paralleled other major scientific discoveries by several progressive scientists who reported the importance of bifidobacteria in healthy individuals, the impact of certain LAB on the prevention of colon cancer, and the production of antimicrobial compounds, including bacteriocins and antibiotics, by a large number of bacteria.

Beneficial effects have been reported with the use of live microbial cells but it is often difficult to differentiate among the effects of the cells themselves, their metabolites, and the culture medium in which they are grown. This is particularly the case for such fermented dairy products as yogurt and kefir (fermented milk), many fermented drinks, such as Yakult, Calpis, and Actimel, and supplemented dairy drinks and dessert, as well as their soy- and other plant-derived counterparts.

For example, many beneficial effects have been related to the release of bioactive molecules either directly produced by the probiotic bacteria or resulting from their enzymatic activities. Numerous modulating antihypertensive, opioid, antimutagenic, and immunomodulating peptides derived from caseins and plant proteins have been already isolated and characterized (Matar et al., 2000). It is more and more obvious that the probiotic properties of microbial cells often require a complex substrate to be fully expressed. This has been shown extensively over the past few years with the appearance of the “prebiotic” concept. A prebiotic can be defined as a “non-digestible food ingredient that beneficially affects the host by selectively stimulating the growth and or activity of one or a limited number of bacterial species in the colon, thus improves the host health” (Gibson and Roberfroid, 1995).

The importance of ingesting “live” bacteria to have a significant impact on the composition of the intestinal flora within animals is now well known. The use of germ-free animals, whose intestinal microflora was gradually implanted through controlled inoculation, has clearly demonstrated the value of live bacteria (Fuller, 1992).

Studies have also shown the importance of feeding live bacteria to various domestic animals in order to minimize the stress of weaning as well as to improve their growth rate and general health status. Recently, the use of antibiotics in animal health has been seriously questioned; probiotic supplements have been found to be highly efficient and desirable alternatives (Abe et al., 1995).

Hurdles Affecting Probiotics
While manufacturers have long been fortifying products with probiotics, they have faced significant processing challenges. Probiotic-containing products, whether they are dairy-based beverages, yogurts, tablets, or health snacks, present unique challenges to manufacturers. The stability of probiotic cultures has been a major issue with yogurt manufacturers and consumers alike for quite some time. In fact, many active milk cultures die even before the consumer receives any of the health benefits (i.e., during manufacturing, during storage, or during transport of the finished product). If the probiotics stay alive during food processing conditions, they must also survive the passage from the mouth to the intestines. Specifically, probiotics are extremely susceptible to their environment. Such environmental factors as water, oxygen, temperature, and acidity affect the overall viability of these beneficial microorganisms.

Probiotic bacteria perform best when they find adequate environmental conditions and when they are protected against various stresses they may encounter during their production at the industrial level or in the gastrointestinal (GI) system (Table 1). 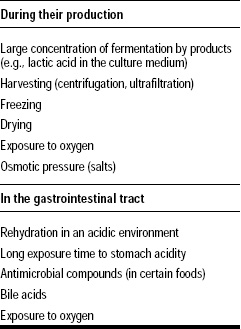 Moreover, the addition of probiotics to food systems is seen as a very effective means of restoring at least part of the initial value associated with microflora that are typically destroyed during such treatments as sterilization, pasteurization, disinfection, irradiation, washing, and peeling. Most practitioners do recommend that probiotic supplements be taken during or immediately after a meal, to benefit from the buffer capacity of the food on the pH in the stomach. Such a buffering should increase the number of microorganisms that survive to the intestines to replenish the microflora.

Technologies for Improving Probiotic Survival Rates
Foods or supplements containing probiotics do not necessarily meet a particular level or even state how much of the culture is present in a viable form within the product. This unregulated “state of affairs” combined with increased scrutiny of supplement and food claims by regulatory authorities and the scientific community has led to a desire to ensure that probiotic products can provide a high enough concentration of live probiotics to actually provide a benefit to an individual.

Currently, ingredient suppliers offer consumers and food manufacturers probiotic cultures that are stable at ambient temperatures by packaging them in such a way as to prevent the bacteria from reacting unfavorably with oxygen, moisture, light, and heat, e.g., in gel capsules, similar to vitamin capsules. Refrigerated gel capsules are much more stable than room-temperature counterparts. However, the application of such large capsules is impractical in food systems and is costly.

Probiotics are known to aid digestion by producing helpful enzymes such as galactosidase, bile hydrolase, protease, and lipase. They also prevent the adherence of pathogenic microorganisms either directly, through a barrier effect, or indirectly, through the stimulation of mucin production. Therefore, it is obvious that their ability to reproduce in the GI tract is an important factor for their overall efficacy. That is why such technologies as enteric coating and microencapsulation have been suggested and investigated as promising routes for maximizing the protection of the biological integrity of probiotic products.

One important aspect of these technologies is their ability to deliver a large concentration of highly viable cells in the jejunum and the ileum. This is a major and significant improvement over the unprotected probiotic products that cannot escape the harsh acidity of the stomach and the bile. The combination of these stresses is indeed a very efficient means used by our GI tract to destroy or strongly inhibit the microbial population of ingested foods (Table 2). This explains why the concentration of live microbial cells in the duodenum rarely exceeds 105 cfu/g of content, while concentrations as high as 108 and 1011 cfu/g can be found in the ileum and the colon, respectively.

The enteric coating of tablets or capsules does protect sensitive microbial cells against the low pH of the stomach. However, such products cannot be incorporated into food products. Microencapsulation is a much better method that offers protection of fine particles, such as those resulting from the freeze-drying and milling of probiotic concentrates. Ultimately, these encapsulated probiotics can be used in numerous food applications. 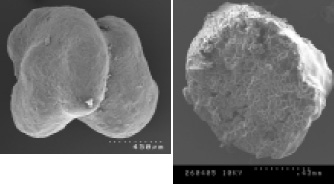 The concept of microencapsulation allows the active core ingredient, or substrate, to be separated from its environment by a protective film or coating. Such a separation occurs until a point in time when the release of this functional ingredient is desired. In the case of probiotics, this would be post-stomach in the human body.

Protective coatings that are preferably used are lipid materials, such as triacylglycerols, waxes, and organic esters. Examples include soybean oil, cottonseed oil, palm kernel oil, and esters of long-chain fatty acids and alcohols.

The lipid coating material applied to fine particles of highly concentrated probiotic cultures is not only an efficient barrier against chemical entities such as moisture, oxygen, and acids (Fig. 3) but also a good protector against short exposure to high temperatures (Tables 3 and 4) and pressure. 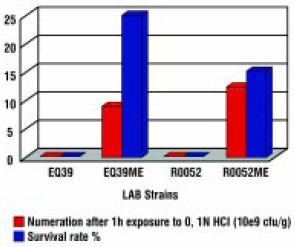 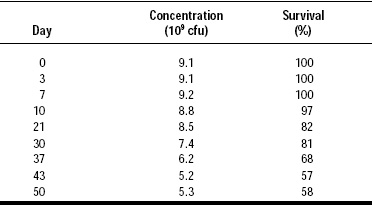 Institut Rosell partnered with Balchem to incorporate encapsulated probiotics into a number of applications with very promising results. These include yogurt-covered raisins, nutrient bars, chocolate bars and tablets. Stability testing of compressed tablets with encapsulated probiotics has shown an unprecedented 100% delivery rate, whereas in standard industry testing of tablet compression, 50–75% of the probiotics do not survive. Testing in chocolate bars and nutrient bars (Fig. 4) have also showed a good recovery rate. Studies are now underway to determine the probiotic recovery rate in yogurt-covered raisins. 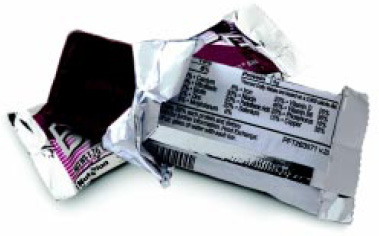 Another important issue relating to the use of probiotics as nutraceuticals or ingredients in functional foods is the dosage, or the concentration of live cells to be delivered. Since mortality rates as high as 90–99% are usually reported for unprotected probiotics exposed to the low pH conditions of the stomach and to the bile acids in the duodenum, it is a common practice, in the field of food supplements, to recommend the intake of 1–10 billion live cells to ensure a delivery of at least 100 million (108) live cells per dose in the GI tract. Microencapsulated probiotic products can overcome the major hurdles of the GI tract and offer better potencies than unprotected products.

Promising Applications
Microencapsulation is the best available technology to preserve the potency of probiotic products to be delivered into the GI tract. This new encapsulation technology should allow probiotics to be formulated into food systems more readily and allow manufacturers to place assuran-ces on the viability and quantity of probiotics in finished products. It should also allow the development of more-efficient delivery systems in the field of bacteriotherapy, where very high doses of viable probiotic bacteria are required. The recent work by Gionchetti et al. (2000) on the treatment of GI disorders by high doses of probiotic bacteria is a good example of these very promising applications.