IFT and CIFST Host Conference in Shanghai
A Food Summit was held in Shanghai, China, on November 12–14, 2002. It was the first major fruit of an Allied Organization relationship established in 2001 between the Institute of Food Technologists and the 130,000-strong mainland Chinese Institute of Food Science and Technology (CIFST), headquartered in Beijing. More than 300 individuals from industry, academia, and government attended the event, which was very timely because of the entrance of China in the World Trade Organization.

Access to IFT’s Password-Protected Sites Made Easier
Starting this month, after signing in to IFT’s Web site (www.ift.org) with their name and password, IFT members will be able to access IFT’s new and improved online membership directory and other password-protected areas.

The membership directory has improved search capabilities to make it easier for members to quickly and easily find other members. Among the improvements is the capability to target a search on a particular data element, such as last name. Members will also be able to make changes to their directory listing. 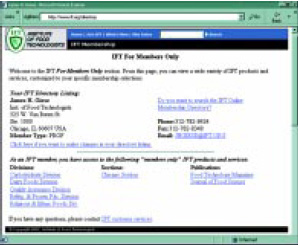 Once in the password-protected area, members will also have one-click access to all other IFT password-protected products and services, such as the online version of Food Technology and certain information provided by IFT’s Regional Sections and Divisions.

Food Technology is currently available online to anyone free of charge. However, after June 1, 2003, it will only be available online to members and subscribers. Others will still be able to access the table of contents, as well as purchase copies of articles online, through the Online Document Shop (www.ift.org/publications/docshop). Thus, access to Food Technology will be the same as access to IFT’s other online publications—Journal of Food Science, Journal of Food Science Education, and Comprehensive Reviews in Food Science and Food Safety, which are available only by subscription.

It features a Concise Review entitled, “Public Perceptions of Biotechnology” by K. Blaine, S. Kamaldeen, and D. Powell, plus 47 other papers. It also contains the annual subject, author, and reviewer indexes.

The table of contents for the issue, as well as the abstracts of the papers, can be viewed—and searched electronically—at www.ift.org/publications/jfs/index.shtml.

SECTION & DIVISION PEOPLE
Regional Sections Are IFT’s Neighborhoods
What are the IFT Regional Sections, and how do they fit into the overall IFT organization? These questions were recently asked at the annual IFT Leadership Conference.

As Toni Ruth Manning, Past Chair of the IFT Committee on Sections and Divisions recently said, “Sections bring humanity to IFT.” IFT Regional Sections hold meetings throughout the year so that members can meet their peers in the area; they have parties to celebrate holidays; and they work together to bring good programming which will enhance their careers. They also elect Councilors and Alternate Councilors to sit on the IFT Council. The Regional Sections are the “people” part of IFT.

The neighborhoods are where everyone starts. Just as children grow up in our neighborhoods and we all try to make them safe environments for the children, IFT students receive their first “taste” of what IFT is like by mingling with professionals and going to educational programs through the Regional Sections.

By working with their neighborhood political organization, people learn how the politics of the city operate and are better prepared to move into city politics should they desire to do so. Likewise, by being active in their Regional Section, members learn how IFT works and become ready to move into volunteer work in IFT within a few years. Regional Sections are the training ground for IFT volunteers, which is why IFT Presidents-Elect prefer to appoint to committees volunteers who have previously served in Regional Sections and/or Technical Divisions.

Some people say that with the use of electronics, Regional Sections are going to disappear. That may happen, but if it does IFT will become like a city without neighborhoods—large, impersonal, and run by trained management personnel whose only goal is to disseminate scientific information. And what will happen to the scientific information without the give and take of information that comes from meeting peers and discussing projects? Where will IFT’s volunteer leaders come from? Who will voice individuals’ concerns in IFT?

The Regional Sections are IFT’s neighborhoods, and I hope they thrive for many years to come.