Humor appreciated
After reading Don Pszczola’s article, “Aquatic Ingredients Provide a New Wave of Opportunity” (May 2003, p. 71), I’m the victim of a type of new disease transmitted by his deep waters travel: hilarity! Since then I’m constantly cheery. I hope that he fully recovered from the sea depth. I’ll try to survive until the next episode. Mind the sharks!

Article captures essence of Dan Weber
I want to compliment you on the article, "Dan Weber Moves On" (August 2003, page 28). You did a beautiful job of capturing who Dan really is and what he has meant to IFT. I really enjoyed reading it.

Updating the Food Guide Pyramid
Paul A. Lachance in his Back Page article, “How Should the Food Guide Pyramid Be Updated?” (July 2003, p. 128) is correct in saying that the USDA Food Guide Pyramid should be updated. He also offers some good ideas for a revision which I understand is due in 2005. However, some of us who use the Pyramid, as I do in workshops for Rhode Island Aging 2000, have designed our own version of the Pyramid. A copy of my Food Guide Pyramid for Older Americans, a revision based on the American Dietetic Association design of 1998, is enclosed. It’s not perfect, but may give your readers some ideas on how some current 2003 nutritional thinking can be incorporated in an updated Pyramid. 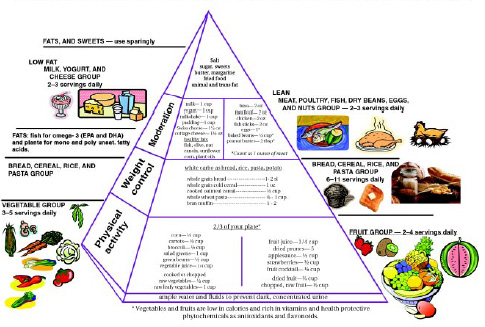 September issue looks great
The September issue of Food Technology looks great. The features and the pictures are crisp and clear; the editorial writing is great. I especially like the item on page 40 which shows attendance and Expo figures for the last several years; it helps us explain what is going on with attendance with facts and figures as opposed to hypothesis. I also like the feature on page 44 on the reasons to attend Las Vegas next year. There has been a marked improvement in Food Technology in the last few years. Keep up the good work!

Disappointed by errors
I was disappointed by several errors in the article, “Taste: The Metabolic Sense,” by Johannes le Coutre (August, p. 34). First, while certain rodents do have taste receptors in the Geschmackstreifen (located at the roof of the mouth) and humans do have taste receptors on the soft palate (also at the roof of the mouth), humans do not have a Geschmackstreifen. This is just one of several ways in which the human gustatory system differs from other animals, illustrating why great caution must be used when making interspecies comparisons. The claim that the five gustatory modalities have been recently “defined on the molecular level” reverses the causality, as these five were defined long before recent investigations at the molecular level took place.

In addition, the author began by asserting that “once in the mouth, only the gustatory sense tells us to spit or swallow.” While gustation is important in this decision, texture, temperature, irritation (burn), and retronasal olfaction (due to volatiles accessing the olfactory bulb via the internal nares) are also important. Rejection of a slimy, chunky sweet beverage is easy to imagine, as is rejection of a sweet-tasting food that smells of rotting garbage. The author later states, “The set of proteins expressed [in taste receptors] dictates a pattern of liking/disliking to the perceptive centers of the brain.” Recent research (Small et al. 2001. Brain 124:1720-1733) indicates that with repeated exposures, a food (in this case, chocolate) initially rated as pleasant can become unpleasant, and there are measurable changes in brain activity despite the fact that taste, smell, flavor, etc., of the food are unchanged. Although it is quite possible that gustation can impact certain metabolic processes, liking/disliking is dependent upon complex cognitive processing of perceived sensation, and is not determined at the periphery.

Author replies:
I am happy that the article ignites discussion and stimulates wide interest. Importantly, I thank Ms. Delwiche for catching my inadvertent oversight—humans definitely do not have a Geschmackstreifen, and I apologize to the readers for allowing this to go uncorrected prior to publication! However, the specific anatomical differences between animals and humans do not in any respect alter the basic principles the article was presenting to the readers of Food Technology.

Molecular research is successfully addressing mechanistic details of sensation with genuinely spectacular results. Although Ms. Delwiche feels the need to defend the prior science of sensation, I do not dispute this, and in fact I would argue that the large body of our current molecular understanding is based on this work.

Moreover, mea culpa for my expressive way of emphasizing gustation over trigeminal and retronasal stimulations—of course they play a role in food rejection. If the article was intending to be complete in this respect, one would certainly add every sensory and memory modality to the mechanisms of rejecting toxic or poisonous substances and foods.

However, I do have to react to one point, as it comes straight to the message of the article. Ms. Delwiche misquoted in a fatal way a sentence, which in its full form reads: “The set of proteins expressed comes hand-in-hand with personalized nutritional needs and dictates a pattern of liking/disliking to the perceptive centers in the brain.” We are, as a field, far from fully understanding the basic mechanisms of taste sensation, much less putting these mechanisms into the overall context of taste preferences and their role in food choices. Nevertheless, research is now recognizing that taste as a sensation and metabolism as a whole body process are linked in ways that were not considered previously. As scientific research and the food industry move forward to understand the basis of food choice and how we could improve foods to enhance consumer quality of life and quality of health, the broader implications of taste must be considered with renewed focus.

Taken together, I am very pleased to see that Ms. Delwiche has joined the discussion and by her enthusiasm reveals that she certainly would have agreed—if needed—on the main message: “Taste: The Metabolic Sense.” Isn’t it striking that we find taste receptors and their downstream signal transduction molecules in the human gastrointestinal tract? Shouldn’t we now ask and speculate what they might be doing there and how they are related to the oral gustatory sensory system? We certainly cannot exclude the attractive idea of a dynamic interplay between sensation and metabolism. Therefore, proper, curious, and original research by scientists from different perspectives and with different tools and strategies is the only way to successfully address this emerging field. I am delighted to see that the article has encouraged this process.