During "Food Technology 101," we learned that oxygen reacts with foods and that exclusion of oxygen in canned foods, many minimally processed foods, and beer aids in product quality retention, the foundations for vacuum and inert-gas packaging. In graduate school, we were exposed to autooxidation and self-propagating reactions that were among the bases of oxidative rancidity and analogous reactions.

Although apprised of biochemical reactions, we did not, however, learn of the subtleties of these deteriorations. The "indefinite" shelf life of canned and dry foods translated from microbiological shelf life. Total quality retention was—and is—a wholly different issue, often casually dismissed as inconsequential since foods and beverages never (well, hardly ever) exceed one year in commercial distribution channels.

However, what about those many foods whose time in channels goes beyond that, such as food for long distance voyages under water or in space or for military action? And what of those foods whose oxidation kinetics permit them to extend to one year or more, but whose quality at six or three months or three weeks in these same channels would be much better if these oxidative reactions were retarded or arrested? Haven’t we experienced or read of the profound changes in nutritional value, color, flavor, and other sensory characteristics due to oxidations and related reactions even when the product is microbiologically sound? Products such as hot-filled apple juice and sauce, clean-filled orange juice, tomato sauces, chilled prepared meats, peanuts and peanut butter, seafood, beer, green vegetables, salty snacks, wine, and so on, undergo adverse non-microbiological quality changes over time in reduced-oxygen hermetic packaging.

Might the quality of such more "oxygen-sensitive" products be better retained if the oxygen levels within their sealed gas-barrier packages were reduced by orders of magnitude less than their present 1%, 0.1%, 100 ppm, etc., all of which are finite quantities? Are not some food processors aggressively blanketing their entire food processes under inert gas even before packaging—under reduced oxygen? Why do some food processors pump out the internal atmosphere so rigorously if not to reduce internal oxygen levels? What is the purpose of the widely publicized oxygen scavenger technologies if not to remove oxygen residual from inability to mechanically remove oxygen prior to packaging and also to control minute quantities or "micro-" oxygen entering by package permeation and transmission? And why the struggle to achieve virtually infinite oxygen barrier in package structures if not to preserve the internal reduced-oxygen environment and hence the product?

Answering the Questions
These hardly rhetorical questions have been the basis of literature reviews and elementary experimental studies at the University of Georgia’s Dept. of Food Science and Technology by graduate students under the direction of Louise Wicker ([email protected]) and me. Under the generic appellation of "Micro-oxygen," we and our students—with support from instrument manufacturer Mocon and gas supplier Air Liquide—have been probing this unexplored territory of near-zero oxygen and its effects on foods.

One recent study by graduate student Lynn Kuchel ([email protected]), summarized here, plumbed the depths of the effects of oxygen on one specific product—beer—whose oxygen sensitivity has been the subject of much concern among those who offer gas-barrier packaging and oxygen scavengers.

Simply stated, oxygen becomes a problem in distribution when it contributes to the deterioration of the beer and truncates product shelf life. Research to reduce the total package oxygen (dissolved plus headspace oxygen) and to limit the ingress of oxygen through package structures is at the forefront of brewing/packaging concerns in "converting" to barrier plastic bottles.

• Color. Browning of beer during storage is accelerated by increased temperature and package headspace. Low-molecular-weight melanoidins contribute to the darkening of packaged beer.

• Appearance. Chill haze formed at 4ºC or lower may be provoked by the tannic acid precipitation of proteins but dissipates when the beer warms to ambient temperature. A more permanent haze may be formed by the agitation that occurs during distribution. This agitation may trigger particle formation by the generation of nucleation sites.

Oxygen may play a role in haze production. An oxygen ion released from hydrogen peroxide could react with the H+ of one amino acid and the OH– of another amino acid in a condensation reaction and then return to the H2O2 compound after the peptide bond is formed. Reactive oxygen participates in haze formation due to metal catalyzed free radical reactions during beer storage. Stable radicals derived from phenolic radicals are produced from part of the polyphenols to form a permanent haze. Polymerization of polyphenols is promoted by oxidation and cross-linkages that are formed with proteins through hydrogen bonding; this initial "chill" haze stage can eventually turn into a permanent haze during distribution.

• Flavor. Flavor stability is one of the biggest concerns in beer shelf life. It is also one of the more-complex systems to quantify. The flavor of beer deteriorates from the moment it is packaged as a result of the oxidation of compounds such as unsaturated fatty acids, alcohols, and iso-alpha acids. Low oxygen content of packaged beer is a prerequisite for flavor stability. A level of 0.27 ppm or below has been proposed as an ideal oxygen level in the finished package.

Oxygen contributes to the production of carbonyl compounds with very low flavor thresholds. Carbonyls such as 2-heptenal, 2-octenal, and 2-trans-nonenal all have thresholds less than 1 µg/kg. Fresh beer typically has approximately 40 µg of carbonyls/L. The problem arises during finished-product distribution, when carbonyl concentrations can potentially increase as a result of the reactions of oxygen radicals. Carbonyl flavor notes are often described as pasty, papery, or cardboard. The term "staling" is most often attributed to an increase of carbonyl compounds, specifically trans-2-nonenal and acetaldehyde. Levels of furfural are also used as an indicator of oxidized flavor in beer.

Formation of Carbonyls in Beer
The main mechanisms for carbonyl formation in beer are as follows:
• Strecker Degradation of Amino Acids. Strecker degradation occurs when free amino acids react with existing carbonyls to produce CO2, NH3, and an aldehyde with one less carbon. The amino acid proline not utilized by yeast can undergo Strecker degradation and contribute to the aldol condensation of carbonyls. Dicarbonyls formed as intermediates of the Strecker reaction can also react with amino acids to form aldehydes which contribute to the development of off-flavors during browning reactions.

• Melanoidin-Mediated Oxidation of Higher Alcohols. Melanoidins are brown nitrogenous polymers and copolymers. Molecular oxygen does not oxidize higher alcohols except in the presence of melanoidins. Compounds formed would not be very flavor active or contribute to the "cardboard" flavor typical of beer "staling." However, melanoidins seem to have some hydroxyl scavenging ability through a Fenton-type reaction, which may account for some carbonyl formation.

• Oxidative Degradation of Iso-Alpha Acids. Iso-alpha acids (isohumulones) contribute to the bitter flavor notes in beer. Oxidative degradation of isohumulones occurs in stored beers; it decreases bitterness but can lead to an increase in "skunky" flavor notes by forming 3-methyl-2-butene-1-thiol. This reaction is accelerated by iron ions and H2O2 or some combination of the two. They are degraded specifically by the reactions of the hydroxyl radical. The reaction occurs at a higher rate under an oxygen environment. An example of a compound produced through this reaction is 2-methyl propanal. Short-chain carbonyls resulting from the oxidation of isohumulones can undergo aldol condensation to form more flavor-active long-chain carbonyls.

• Adol Condensation of Short-Chain Aldehydes. Unsaturated carbonyls formed during the wort stage of beer making can decompose into shorter chains, which then undergo aldol condensation. Saturated aldehydes can also condense with proline to form 2-alkenals such as 2-trans-nonenal.

• Enzymatic and Nonenzymatic Oxidation of Fatty Acids. Enzymatic oxidation of unsaturated fatty acids during malting contributes to the flavor instability of finished beer. Despite the high reducing activity of yeast, oxidation during mashing and boiling appears to be a key step toward the development of stale flavors during distribution. Lipoxygenase in the wort causes oxidation of the very low level of fatty acids, but only a very small percentage needs to be oxidized to produce flavor compounds in excess of their flavor threshold. Linoleic acid is typically the wort constituent that is oxidized to 2-trans-nonenal. Only a 0.0002% level of the fatty acids present needs to be oxidized to provide enough carbonyl compounds to be detected. Once oxidation begins, autooxidation can take over and create a variety of off-flavor compounds until the enzymes are deactivated by pasteurization. Autooxidation can also contribute hydrogen peroxide. The rate of lipid oxidation is independent of oxygen concentration at high levels but proportional to the oxygen concentration at very low levels.

• Production of Oxygen Radicals by H2O2. Oxygen radicals are a primary factor in the degradation of beer. Hydroxyl radicals accelerate the production of aldehydes and the degradation of isohumulones. Generation of oxygen radicals occurs through autooxidation reactions and through the Fenton and Haber-Weiss reactions of metal ions and H2O2. The H2O2 is generated from ground-state molecular oxygen. Hydroxyl ions formed by the Fenton or Haber-Weiss reactions can then oxidize beer components into aldehydes and ketones or initiate a series of secondary radical reactions that could further oxidize compounds in beer.

Oxygen radicals can be generated from H2O2 (generated from autooxidation) through the action of metal catalyst via the Haber-Weiss or the Fenton reaction. Levels of iron and copper are high enough to have a significant effect in producing hydroxyl radicals. An acidic environment favors the production of O–2 radicals and not hydroxyl radicals; under equilibrium conditions, the oxygen radicals in packaged beer will degrade.

In addition to the hydroxyl radical (OH•) two other oxygen radicals relate to beer degradation; super oxide O2– and singlet oxygen. Oxygen incorporated upstream (during mashing) may play a role in damage to the flavor after packaging even when total package oxygen is very low. These radicals may lower the antioxidant level in packaged beer and make it more susceptible to the effects of oxygen in the final package. 18O is not incorporated into carbonyls during the storage of beer, and therefore the carbonyls are formed before fermentation but protected from yeast reduction by linkage to amino acids and proteins. Some 18O is incorporated into the polyphenol and isohumulone components, indicating that those components are oxidized after packaging.

Reducing Oxygen to Increase Shelf Life
Typically, commercial brewers use a measurement of total in-package oxygen which includes both the dissolved oxygen in the liquid and the amount of oxygen in the headspace of the package. Continual improvements in packaging capabilities have brought the total package oxygen down to <50 ppb. A value <1 ppb represents effectively zero oxygen transmission through the package structure. Is it even possible to measure <1 ppb? 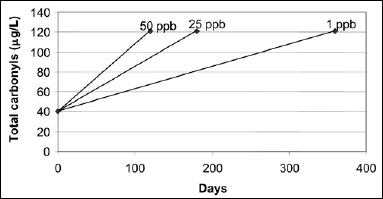 The rate of carbonyl formation increases with an increase in oxygen concentration. Using an oxygen limit of 50 ppb from current manufacturing/packaging, estimating the amount of carbonyls in fresh beer as 40 µg/L, and setting a limit of 121 µg/L carbonyls as the end of shelf life, Fig. 1 shows how beer shelf life could possibly be extended to 360 days.

Theory Merits Further Attention
As discussed above, a decrease in oxygen down to 1 ppb may extend the shelf life of beer beyond the typical commercial 120 days. But beer is a complex system, so brewers and packagers cannot rely on only one component of the system to control shelf life.

While eliminating oxygen from the entire beer-making process may not yet be practical, brewers continue to strive toward the goal of "zero" oxygen or what we are calling "micro-oxygen" without definitive knowledge that meeting this goal is truly necessary.

And how might this information from beer chemistry be meaningfully applied to the quality retention of the vast array of other foods undergoing biochemical oxidations?

Nevertheless, in light of the data generated from reviewing the beer experience, this theory of the effects of micro-oxygen certainly merits much further attention.