Food scientists have known the benefits of antioxidants in natural and formulated foods for a long time, but in these days of "healthy food diet" promotion, almost all consumers can also tell you the "health benefits" of antioxidants in foods they eat: 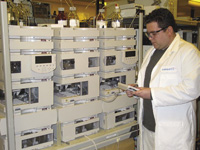 A diet high in antioxidants may reduce the risk of many diseases, including such cancers as stomach, prostate, colon, bladder, breast, pancreas, and lung. Flavonoids, such as catechins in green tea, contribute to low rates of heart disease. Lutein, found in spinach and corn, has been linked with a lower incidence of eye lens degeneration and associated blindness in the elderly. Vitamin E can halt the oxidation of LDL ("bad") cholesterol.

What is behind these phenomena? Antioxidants are found in certain foods that neutralize free radicals. The normal process of oxidation in the human body damages some cell membranes and structures like cellular proteins, lipids, and DNA. When oxygen is metabolized in this manner, it creates "free radicals" which steal electrons from other molecules, causing damage. Although the body can cope with some free radicals and needs them to function properly, an overload of free radicals has been linked to the various diseases listed above. Also, if a person has too few antioxidants to counteract the free radicals, significant cellular damage can lead to a variety of chronic degenerative diseases, ranging from stroke and fibromyalgia to sinusitis, arthritis, vision problems, and even Parkinson’s and Alzheimer’s disease.

Therefore, it is important to know the best food sources of antioxidants and how to measure their quantity and quality.

Antioxidant Sources
The most familiar antioxidants are vitamins A, C, and E and the minerals copper, zinc, and selenium. Other dietary food compounds believed to have even greater antioxidant effects include non-nutrient antioxidants, such as phytochemicals in plants and zoochemicals from animals. Examples are lycopene in tomatoes and anthocyanins in cranberries.

In the largest study the U.S. Dept. of Agriculture ever conducted on food antioxidants in commonly consumed foods (Wu et al., 2004), researchers at USDA’s Arkansas Children’s Nutrition Center, Little Rock, reported that "The bottom line is the same: eat more fruits and veggies. This study confirms that those foods are full of benefits, particularly those with higher levels of antioxidants." Beans, artichokes, and Russet potatoes contain a surprisingly high level of these disease-fighting compounds, and nuts and spices are also good choices. Wild blueberries ranked highest among the more than 40 other fruits and vegetables.

More than 4,000 flavonoids—polyphenolic compounds that appear widely in plant-based foods—have been identified as having antioxidant functions in fighting disease. A recent study (Van Kreijl and Knaap, 2004) indicated that chocolate—in moderate consumption—may actually be nutritionally good for you, since chocolate is a rich source of antioxidant compounds which may provide protective effects against cardiovascular disease.

"Although we have used a gas chromatography (GC) method to confirm antioxidant levels in samples," she said, "our formal method is to use high-performance liquid chromatography (HPLC) for measurement of antioxidants, such as PG, BHA, TBHQ, and BHT, in food products. By adjusting the sample size and diluting volume when necessary, typical samples containing antioxidants ranging from five parts per million (ppm) to percent levels may be analyzed."

Eastman’s method employs organic solvent extraction of antioxidants from food products. A weighed amount of sample is extracted with an aliquot of appropriate solvent for a long-enough period to ensure that the maximum amounts of antioxidants are extracted. The sample is then analyzed by reversed-phase HPLC using a C18 column, ultraviolet (UV) detection, and gradient analysis using a buffer/organic solvent system. The antioxidants present in the sample are then quantified by either internal or external standardization.

"To ensure complete extraction of antioxidants," she said, "we continue to work toward identifying new extraction techniques for various types of food products where removal of antioxidants proves difficult and measurement of results is not reproducible."

"The accelerating interest in the antioxidant properties of polyphenolic compounds," he said, "has resulted in the need for analytical methods to support product development, labeling claims, and clinical studies. The primary goal of recent method-development projects is to provide an efficient assay for the determination of multiple compounds with a single mode of analysis.

"Our original focus was the six polyphenolic catechin compounds found primarily in green tea. Through the use of modified extractions and multiple detection systems, we can now quantify a variety of other compounds, including trans-resveratrol, caffeine, gallic acid, and the phenolic components found in echinacea."

Samples are prepared by placing approximately 1 g of a product or ingredient into a volumetric flask and adding 1 g of ascorbic acid and 40 mL of an extraction solution. Although the sample preparation process for all botanical products follows a similar methodology, it may be optimized for the sample matrix by adjusting the initial weights and volumes to accommodate manufacturer claim or historical data. The analytes are quantified by linear regression, using peak areas and the concentrations of working standards.

"The method has shown the reliability and robustness required to provide the accurate analytical data necessary for quality control and labeling guidelines," Lilla said. "Relative standard deviations on the various matrices investigated typically ranged from 2 to 4%."

Researchers are interested not only in the quantity of antioxidants present, but also the quality. The oxygen radical absorbance capacity (ORAC) test is an in-vitro or in-vivo assay that measures the total antioxidant power of foods and other chemical substances by tracking chemical biomarkers, Lilla explained. The assay combines a sample with a chemical marker that fluoresces and an oxidizing agent. For food analysis, a freeze-dried sample undergoes an extraction and drying process and then is combined with a peroxyl radical such as 2,2´-azobis(2-amidino-propane) dihydrochloride (AAPH) and a fluorescent probe for injection into an analyzer. "As the battle between the free radicals and antioxidants progresses, more of the fluorescing marker is used up until none is left and the level of fluorescence is zero," Lilla said. "The assay represents a breakthrough in antioxidant testing. Because ORAC measures both lipophilic and hydrophilic extracts, it is the first tool for measurement of total antioxidant capacity."

Trolox®, a water-soluble vitamin E analog, is a widely accepted standard for antioxidant activity, and ORAC results are expressed as 1 ORAC unit = 1 micromole of Trolox equivalent per gram.

Uniform Standards Ahead
Researchers gathered in Orlando, Fla., on June 16–18, 2004, at the First International Congress on Antioxidant Methods. At that historic 3-day meeting, representatives from 19 countries agreed to establish uniform measurement standards which would ultimately provide more-reliable data for consumers in their application of dietary antioxidants to fighting human diseases.

Obviously, antioxidants have found a welcome in the hearts of food scientists and consumers.