The rapid growth in the natural, organic, and uncured product segments of the meat and poultry industries over the past 3–4 years, as well as the various claims regarding the raising and handling of the animals involved, has led to confusion as to the exact meaning of the various labeling terms. 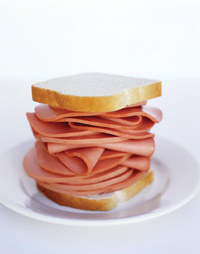 Labeling Terms
In labeling, natural, organic, and uncured refer to three distinct meat and poultry product categories governed by separate U.S. Dept. of Agriculture labeling policies and federal regulations. All three types of products cannot have added nitrates and nitrites by definition. Additionally, various label claims, generally negative, concerning how the animals were raised (e.g., “no antibiotics administered”) or handled (e.g., “humanely slaughtered”), are voluntary, but such claims must be verified to USDA.

Natural. Processed meats that are labeled “natural” must comply with the definition of the term provided by the USDA Food Standards and Labeling Policy Book (USDA, 2005). This definition requires that a natural product “does not contain any artificial flavor or flavoring, coloring ingredient, or chemical preservative (as defined in 21 CFR 101.22), or any other artificial or synthetic ingredient; and the product and its ingredients are not more than minimally processed.”

Furthermore, “(4) the term artificial color or artificial coloring means any ‘color additive’ as defined in 70.3(f) of this chapter. (5) The term chemical preservative means any chemical that, when added to food, tends to prevent or retard deterioration thereof, does not include common salt, sugars, vinegars, spices, oil extracted from spices, substances added to food by direct exposure thereof to wood smoke, or chemicals applied for their insecticidal or herbicidal properties….”

The term “minimally processed” includes “traditional processes used to make food edible or to preserve it or to make it safe for human consumption, e.g., smoking, roasting, freezing, drying, and fermenting, or those physical processes which do not fundamentally alter the raw product, … e.g., grinding meat….” Apparently, from current industry practices, this definition only applies to the actual meat product itself and not to the external means used for preservation during distribution and sales, such as packaging (vacuum, modified-atmosphere) and post-packaging treatments (high pressure).

USDA definitions for both natural fresh meats and natural processed meats currently are under review and thus, at this writing, are not finalized.

Organic. Products labeled "organic" are much better defined and controlled than those labeled with "natural" claims because organic products are governed by the Organic Foods Production Act (OFPA), first passed in 1990 as part of the 1990 Farm Bill (Winter and Davis, 2006). OFPA authorized USDA to create a National Organic Standards Board, which established a National List of Allowed and Prohibited Substances and developed National Organic Program standards.

The NOP standards, implemented in 2002, specify methods, practices, and substances that may be used for production, processing, and handling of organic foods. This means that products and ingredients used for organic foods must be certified as organic by a USDA-certified inspector. Meat, for example, must be raised using organic management and come from a certified farm. Ingredients used for processed products are clearly defined as permitted or prohibited in the OFPA National List.

Uncured. Also separately, the Code of Federal Regulations (9 CFR 317.17) states that normal cured products ("to which nitrate or nitrite is permitted or required to be added…") can be made without nitrite or nitrate and labeled with such common or usual name or descriptive name when immediately preceded with the term "uncured." Additionally, "No nitrate or nitrite added" labeling is also required. All organic and natural products are uncured by definition, but not all uncured products are natural or organic (Bacus, 2006).

Types of Processed Meats
Traditional processed meats are either cured or uncured products. The term "cured" relative to processed meats is universally understood to mean the addition of synthetically produced nitrite or nitrate salts with common salt (sodium chloride) and other ingredients to meat for improved preservation (Pegg and Shahidi, 2000). While several ingredients, including sugar, spices, phosphates, and other ingredients, are typically included in cured meats, it is the addition of nitrate/nitrite in one form or another that results in the distinctive characteristics of cured meat (Cassens, 1990).

Specifically, the addition of the nitrite molecule (–NO2) to meat results in the formation of nitric oxide, which is the active agent in meat curing. Generally, the nitrate molecule (–NO3) when added alone will not cure meat; it must first be converted to nitrite either before or after addition to the meat.

The typical color, flavor, shelf life, and safety of ham, bacon, frankfurters, bologna, corned beef, and pastrami and other cured products are so widely recognized by consumers that these product names are considered "standardized" and "traditional" by USDA for product labeling and therefore do not require any further clarification to communicate the expected product properties to consumers. Often, the term "smoked" can also indicate that the product typically is cured.

Conversely, traditional processed meats manufactured without the addition of synthetic nitrite or nitrate are considered uncured products, although the term "uncured" is not required, since the standardized product name effectively communicates that the product is not cured. Fresh sausage, such as pork sausage, for example, is not labeled as uncured because these products are standardized and traditional and the common name is clearly understood. Other examples of typically uncured products are roast beef, bratwurst, Italian sausage, "oven roasted" turkey breast, and many precooked meats.

Many of the other common ingredients used for cured meats are also used for uncured meats, including common salt, sugar, dextrose, corn syrup, phosphate, lactates, spices, and flavorings. Additionally, many of the processing techniques are identical or similar (Sebranek and Bacus, 2006b).

Natural meat products, by definition, cannot contain artificial ingredients or chemical preservatives, and both the ingredients and products must meet the definition of minimally processed. Many ingredients used in processed meats, both cured and uncured, are considered either chemical preservatives or more than minimally processed, such as phosphate, lactate, diacetate, sodium erythorbate, sodium ascorbate, citric acid, BHA, BHT, and various binders such as soy proteins and starches. Many of these ingredients have dual functions, which may include two or more of the following: flavoring agents, microbial inhibitors, binding agents, oxygen scavengers, antioxidants, antioxidant synergists, texturing agents, etc.

For natural meat products to maintain the typical characteristics (color, flavor, texture, stability) associated with traditional products, processors must utilize a variety of ingredients that are considered natural and partially replace those functional and preservative properties of the chemical additives and those ingredients that are more than minimally processed. Examples of these "natural" ingredients are carrageenan (seaweed), sodium bicarbonate (baking soda), vegetable and fruit juices and powders, vinegar, spices, "natural" flavors and extracts, honey, sugars, food starter cultures, etc.

Nitrate, Nitrite, and Natural Curing
Since the addition of synthetic nitrate and nitrite is prohibited, for any natural meat products to resemble traditionally cured meats, processors often utilize permitted natural ingredients and modified processing—a process that has become known as natural curing.

The term "natural curing" is not officially recognized by USDA, but it refers to an ancient process that is the origin of all modern cured meats. Natural curing has been used for centuries, being traced back to the early Egyptians and Romans. It refers to the microbial conversion of naturally occurring nitrates present in the environment to nitrites, which then cure the meat in the same manner as if synthetic nitrite had been added. Naturally occurring nitrates can be present in the soil, sea water, various "sea salts," and green plants (including vegetables), since nitrate is an essential part of the total nitrogen cycle. Many types of microorganisms in the environment have the ability to convert these naturally occurring nitrates to nitrite; thus, combining these two natural ingredients (vegetables or sea salt + harmless food-grade microorganisms) can result in a natural preservation system for meat (Bacus, 2006).

Natural Flavorings
"Natural flavoring" generally has been defined by USDA as the essential oil, oleoresin essence, or extractive, protein hydrolysate, distillate, or any product of roasting, heating, or enzymolysis that contains the flavoring constituents derived from natural sources such as spices, fruits, vegetables, plants, meats, seafood, etc.

"Spice oleoresins" are specifically mentioned as acceptable in natural meat products (USDA, 2005), although oleoresins are chemically extracted and have been shown to prevent or retard the deterioration of food (i.e., preserve). These characteristics seem to conflict with current USDA policy for natural ingredients, and unfortunately, some customers reject spice oleoresins as not being "natural" because the oleoresins have been chemically extracted (although they can be labeled as "natural flavorings").

Many chemicals found in nature are identical to their synthetic counterparts and function similarly when added to meat products. Sodium lactate is a chemical found in nature but is not permitted in natural meat products, since USDA considers it a chemical preservative retarding food deterioration. However, vinegar (acetic acid), baking soda (sodium bicarbonate), cane sugar (sucrose) and common salt (sodium chloride) are also found in nature but are permitted; common salt, vinegar, and sugars are specifically exempt from the definition of chemical preservative, although all three can prevent food deterioration and have also been used as such for centuries.

All the above synthetic and naturally occurring chemicals and many more can have dual functions when added to meat. Therein lies the regulatory dilemma. Additionally, regulations based on processor "intent" or "function" are vague and difficult to implement.

Although under USDA review, the term "natural" does not refer to the actual meat portion of the product. All meat is considered natural, regardless of the conditions by which the animal was raised or whether any antibiotics, hormones, etc., were administered. Many meat processors have employed various combinations of natural, natural with voluntary claims, organic, organic with voluntary claims, uncured, and uncured with voluntary claims to promote their products, but generally there is no scientific data to prove that such products actually are healthier than other products.

Food science, technology, and marketing have always been ahead of government regulation, but never has it been more apparent than with these growing categories of natural, organic, and uncured meat and other food products. Current regulations and policies have been surpassed by new technologies, or the better understanding and control of "old" technologies. In some cases, the existing regulations actually have resulted in misleading labeling ("not preserved," "no nitrates added," etc.) over which the meat processor has no control.

The growing trend to more organic meat products is a result of better definition of the food components and the fact that some synthetic and natural chemicals are accepted in products labeled as "organic." The desired end result is that the consumer is adequately informed and the food is safe for consumption. For natural meat products, the terms "Naturally preserved with _____ ," "Naturally cured with _____ ," etc., are seemingly accurate terms which reflect the use of natural ingredients and historic processes for preservation. Regulatory agencies may want to consider these, or similar, terms for a new meat product category that reflects the use of naturally occurring chemicals and beneficial microorganisms to preserve meat.

This article is based on a presentation at the 2007 IFT Annual Meeting & Food ExpoSM, Chicago, Ill., July 28–August 1.