Economic pressures, a desire to better control the healthfulness of what they eat, and a belief that family meals can have a positive impact on a child’s academic and social skills are driving Americans to eat more meals at home.

In a typical week in 2007, the mean number of dinners that were cooked and eaten at home was 4.8, eaten at a restaurant 1.1, from take-out or prepared food brought home 0.7, eaten somewhere else 0.3, and skipped 0.1. Two-thirds of families sat down together for dinner at home (GfK Roper, 2007). 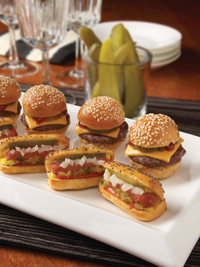 As gas prices skyrocket, consumers continue to cut back on their restaurant visits, averaging two fewer visits per person for the year ending (Y/E) May 2007 or nearly 600 million trips, according to the NPD Group (Glazer, 2007a). In November 2007, RBC Capital reported that 43% of consumers bought restaurant meals less often than six months ago, up another 4% since August. More important, 59% planned to eat out less over the next three months and only 20% intended to order appetizers, desserts, or higher-priced entrees (Anonymous, 2007).

For the quarter ending May 2007—the latest data available—traffi c at fi ne-dining restaurants and upscale hotels dropped 4%, midscale fell 1% after a 2% drop the previous quarter; casual dining was fl at, and quickservice restaurant (QSR) traffi c grew 1%, down from 2% the previous quarter (Glazer, 2007a).

Two-thirds of consumers ordered full-service restaurant (FSR)/curbside take-out at least once a month in 2007, up from 54% in 2005. Heavy users (more than once a week) nearly doubled to 21%. Heavy users are more likely to be males with no children, led equally by those age 35–54 and those under 34 (Technomic, 2007b).

But while restaurants captured 87% of visits from consumers looking for prepared meals and snacks for Y/E March 2007, the traffi c at retailers, e.g., convenience stores and supermarkets, grew faster than at restaurants. Retailers now rank a distant second to QSRs, which enjoy 64% of restaurant traffi c; retail foodservice accounts for 13%, midscale restaurants 12%, and casual-dining eateries 11% (Glazer, 2007b).

Convenience stores are now the retail channel most often used to purchase prepared foods, accounting for 54% of all foodservice retail traffi c; next in line are supermarkets (32%), discount stores such as Wal-Mart and Target, and price clubs (Glazer, 2007b). Technomic (2007c) reports that the number of consumers rating their prepared foods purchased from supermarkets and convenience stores in the past two years as excellent jumped 4% for both to 22% and 8%, respectively.

With 20% of consumers eating breakfast on-the-go at least three times a week in 2007, lunch 21%, and dinner 9%, according to Information Resources, Inc., it’s not surprising that other grab-and-go eating venues are gathering steam (Wyatt, 2007).

Nearly 60% of offi ce workers in the United States spend lunch breaks at their desks (Sloan, 2007). Not surprisingly, savvy fast-food marketers like Hardees’s have begun to target employees with coupons distributed in their paycheck envelopes. One-quarter of QSR customers come from work during the day and 22% from 10 p.m. to 5 a.m.; an average of 28 take-out restaurant meals per person are eaten at work annually (NPD, 2007e).

What’s Cooking?
Required little eff ort or easy to make was the top reason why 53% of consumers prepared the dish they made for last night’s supper; followed by took little time/no planning 50%; made with foods that are on-hand 39%; everyone would like it 35%, and easily cleaned up 34% (NPD, 2006b).

Gallup reports that on a typical night in 2007, 89% of meal preparers made a dinner at home—57% prepared the meal from scratch primarly with fresh ingredients, no mixes; 24% prepared their “homecooked” meal with prepackaged foods that require some preparation; and 8% used only frozen or heat-and-serve pre-packaged foods (MSI, 2007). Those age 50 and older were signifi cantly more likely to make a meal from scratch and to use frozen or heat-and-serve foods, and those 18–49 to use prepackaged foods that require some preparation.

According to MSI (2007), a meat/poultry entrée was served by 61% of meal preparers during a typical week in 2007 and led the list of dishes served on weeknights, followed by vegetable side dishes 44%; rice, potato, stuffi ng, or pasta side dishes 39%; bread, biscuit, or rolls 29%; a green salad 28%; and dessert 18%. Ten percent served a sandwich, the food item posting the largest gains at suppertime compared to 2003. Pasta as a main dish, casseroles or one-dish meals, and appetizers were also served more frequently for dinner last year than in 2005.

Just under half (46%) of consumers usually plan their meals in advance, mostly rotating between meals that are part of the family repertoire and for which they have their preparation down to a routine (Yankelovich, 2007). Only 29% of meal preparers used a recipe at least once per week, and 19% at least once a month (Gfk Roper, 2007).

Not surprisingly, the average number of dishes served at in-home suppers continued to fall, to a new low of 2.96 dishes in 2006; more than half of dinners still included a side dish (NPD, 2006a).

Although the stove top is most frequently used for cooking, baking tops the list of the most-used meal preparation techniques, followed by microwaving, grilling, frying, broiling, boiling, and steaming (Yankelovich, 2007). Just 45% of consumers use their microwave to prepare dinner at least 3–4 times a week (Parade, 2007).

While fresh is still the most desirable food label claim according to HealthFocus (2007), well over half of what grocery shoppers buy are frozen (24%), packaged/processed (21%), or fresh prepared (13%) products; 42% are fresh (Yankelovich, 2007).

Sales of canned soup in food, drug, and mass channels including Wal-Mart (FDMW) rose 5% to $3.2 billion for Y/E 8/16/07, in large part because of the introduction of new healthy and lower-sodium options (IRI, 2007a). High-end versions of pasta sauces are also getting renewed attention.

Hopefully, new restaurant-inspired heat-and-eat fresh dinners will bring renewed excitement to the refrigerated ready-meal category. IRI reports that dollar sales fell 5% for refrigerated dinners and entrees during the quarter ending 9/9/07. Over the previous year; frozen single-serve and multi-serve dinners were up 2.6% and 2.3%, respectively (Canning, 2007a).

Everyday Gourmets
Nearly three-quarters (73%) of all consumers purchased specialty foods in 2007, up from 64% in 2006 (Tanner, 2007). Young adults 18–24 and 25–34 are the most likely to buy gourmet foods/beverages; those 25–34 are the highest per capita spenders. Nearly two-thirds buy specialty foods for everyday use at home. 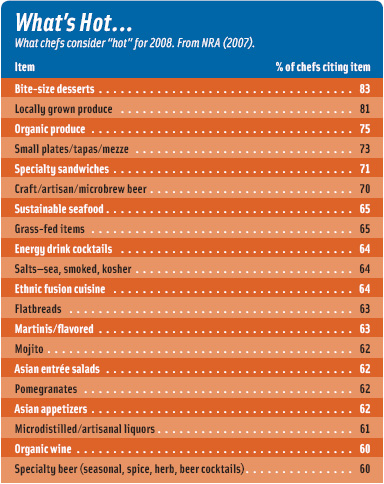 What’s Hot on Restaurant Row
A survey of American Culinary Federation chefs by the National Restaurant Association (NRA, 2007) found that what’s small will be big on restaurant menus for 2008—bite-size desserts and small plates, tapas, and mezze topped the list of trends chefs consider to be “hot” when it comes to courses.

Dynamic Dayparts
When it comes to dayparts, the morning meal (up 7% in traffi c from June through August 2007) and afternoon snacks (up 3%) continue to be the bright spots in the restaurant business, while lunch traffi c grew only 1% and supper traffi c fell 2% (NPD, 2007f).

• Lunch. According to Technomic (2007e), lunch accounts for 25% of take-out orders from restaurants. In 2006, burgers, chicken sandwiches, tacos/burritos, deli sandwiches, sub sandwiches, hot dogs, wraps, and salads were the top take-out items. Nearly seven in ten (69%) prefer hot sandwiches, and 56% ate more of them in 2007.

Club, Philly cheese steak, Reuben, and turkey sandwiches are gaining on menus, along with the use of focaccia bread, paninis, and wraps (Perlik, 2007). Caesar and Cobb rank No. 1 and No. 2, respectively, as salad best-sellers in restaurants, but Capresse, house signature, Asian chicken, steak, and taco are coming on strong. Ranch and balsamic vinaigrette are the most-menued dressings.

• Snacks. According to IRI’s 2007 Consumer Snacking Study, 55% of consumers snack in the evening, 48% in the afternoon, and 27% in the morning more than three days a week (Wyatt, 2007). Yogurt led growth in the consumer product snack industry with sales in FDMW up 7.9% in 2006, followed by snack/granola bars 5.7%, crackers 5.4%, frozen novelties 3.9%, salty snacks 3.7%, and chocolate candy 3.2%. Most sweet categories lagged the industry average growth rate of 3.2%, including cookies, ice cream, and non-chocolate candy.

Snack occasions have been on the rise in U.S. restaurants and now account for 12.1 billion visits/year. The majority of the snack occasions occur in the QSR segment, which accounted for 94% of all snacking occasions or 11.4 billion visits in the year ending May 2007. The afternoon snack is the most popular snacking time, accounting for nearly half of all QSR traffi c growth in Y/E May 2007 (NPD, 2007g).

Healthy Does It
Consumers continue to shop for health, looking for more-specifi c claims and more healthy convenience products (Sloan, 2007b). In fact, when asked what factors were important in defi ning a convenience food, helps me maintain a healthy diet topped the list (very important to 48%), ahead of little or no preparation 34%, portable 20%, packaged as a complete meal 17%, and single serve 16% (GfK Roper, 2007).

Sales of portion-controlled foods jumped 42% in mass channels for Y/E 9/9/07, low-calorie/light increased 4%, and low-carb products fell 45% (IRI, 2007b). Light/low-fat soup experienced exceptional growth of 73%, light yogurt 7%, light ice cream 6%, and light/low-fat snacks 3%. Sales of products with a sugar-free claim jumped 6% to $5 billion and no-sugar-added foods/beverages also 6% to $3 billion (Lempert, 2007b). Both the bread and the pasta segments are challenged with declining sales as a result of the obesity issue (Mintel, 2007b,c).

Consumers are actively avoiding products with harmful ingredients. Products carrying a natural claim reached $19 billion, up a whopping 8% in mass-market sales, according to ACNielsen’s LabelTrends (Lempert, 2007b). Preservative-free products topped $10 billion, up 2%. Nutrition Business Journal projected that organic foods would grow another 12.7% in 2007 (IRI, 2007b). Organic fruits/vegetables were purchased by 44% of shoppers, organic dairy 30%, organic cereal, bread or pasta 29%, packaged foods 24%, meats/poultry 21%, eggs 16%, and soups 10% in 2006 (FMI, 2006).

Dollar sales of hormone-free products over the past year grew 25% in mass channels, GMO-free foods/beverages 26% (Lempert, 2007b). Datamonitor’s ProductScan Online (Datamonitor, 2007) reported that in 2007 through November 26, 41% of new U.S. foods/beverages carried a natural or organic claim, 17% a fresh claim, 3.9% a reduced/low-sodium/salt claim, and 19% a “high-in” claim.

Americans have made an eff ort to include more whole grains and fruits/vegetables in their diets. Sales of foods/beverages carrying a whole-grain claim soared 9% in mass channels to $10 billion, calcium-touting foods up 3% to $9 billion, according to ACNielsen’s LabelTrends. Sales of products fl agging antioxidants on their label were up 49% for Y/E 7/14/07, gluten-free 20%.

Healthy foods for children also grew three times the rate of regular kids’ foods (2006). With 63% of parents watching portion sizes for their children, 60% looking for snacks with nutrients, and 40% and 34%, respectively, wanting more low-fat and low-calorie snacks, the growth opportunities for healthier kids’ products are unprecedented (IRI, 2007b).

Lempert, P. 2007a. Breakfast cravings in the AM or any time of day. Facts, Figures, & the Future, Sept. www.factsfiguresfuture.com.

NPD. 2006b. Convenience trumps health as the driving force behind how America eats. Press release Oct. 24, 2006.