Nanotechnology innovations are impacting many industries, including energy, defense, medical, and pharmaceutical. Nanotechnology’s potential to influence the food industry is becoming increasingly feasible with the rapid growth in prospective applications and the increasing knowledge of its safety/risk implications to human health and the environment.

Regulatory agencies worldwide are continually working to develop rules and guidelines that protect human health and the environment, bolster consumer confidence in nanotechnology-based products, and encourage innovation by industry. At the same time, governments and private sector alike are increasingly investing in research and development of nanotechnologies in all sectors.

Held in conjunction with the recent IFT Annual Meeting & Food Expo in Chicago, the fifth IFT International Food Nanoscience Conference focused on recent advances in safety and toxicological assessment of nanomaterials for food and food-related applications, the current regulatory guidelines in the United States and Europe and their legal implications to industry and other stakeholders, and investments (public and private) in nanotechnology research and development initiatives worldwide. Further, the conference explored possible food industry needs for successful application of nanotechnology in food. The conference was organized by the IFT Nanoscience Advisory Panel and sponsored by Advanced Foods & Materials Network (AFMNet) and Holland.

State of Safety Research
The conference kicked off with a session on the state of the science for food nanomaterials’ safety relative to human health and the environment as well as advances in risk assessment, characterization, and detection technologies.

Bernadene Magnuson of Cantox Health Sciences International delivered the keynote address, which provided an update on safety and toxicological assessment of nanomaterials for food applications. Magnuson’s presentation was based on a recently completed research report sponsored by IFT in collaboration with the Grocery Manufacturers Assoc. and the International Life Sciences Institute – North America.

The report evaluated 30 published studies on oral toxicity of nanomaterials, selected based on a two-step assessment methodology used to rank overall quality of the studies. The method assigned two scores, namely the “study score” and the “nanomaterial score” (Card and Magnuson, 2010). The “study score” involves assessment of adequacy of study design based on a publicly available tool for ranking the reliability of toxicological studies (Figure 1). The “nanomaterial score” assesses the completeness and reporting of the physicochemical characterization of the nanomaterial(s) being studied (Figure 2). The research found most studies to be limited in duration (mostly short-term) with insufficient characterization data and/or lacking in critical experimental design considerations. The report recommends comprehensive characterization of nanomaterials under study and use of extended exposure durations in safety assessments for humans. Additionally, it calls for a significant increase in investment in safety research, particularly oral toxicity in order to generate sufficient and good quality data. 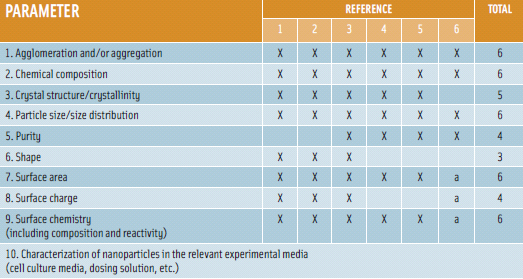 Paul Howard of the National Center for Toxicological Research of the U.S. Food and Drug Administration (FDA) described the science-based risk assessment approach used for FDA-regulated nanotechnology-based products. The approach is dependent on a combination of quantifiable hazards as well as exposure assessment of nanomaterials in the products. He further discussed ongoing research within the FDA centers and other collaborators (domestic and international) to provide data for safety assessments, including use of animal model, sentinel organs, and toxicity data.

Characterization of nanomaterials in toxicity studies and the ability to detect them in nanotechnology-based products are major prerequisites for safety and risk assessment. According to Stefan Weigel of the Institute of Food Safety at Wageningen University and Research Centre in The Netherlands, these characterization issues pose key challenges for researchers in many fields. One of the challenges across all research fields is the large diversity in nanomaterial size, size distribution, chemical composition, and surface activity. This challenge is exacerbated by the great differences among production batches of the same material.

A unique challenge for food research is the very complex nature of food matrices in which nanomaterials are embedded as well as potential interactions with components of the food such as proteins. All of these challenges require tailored solutions for analysis of the various materials. Weigel discussed several analytical approaches, from sample preparation to detection, currently used to analyze pure inorganic nanoparticles and also those in food. Examples include sample preparation methods (e.g., extraction, enrichment); imaging techniques (e.g., electron microscopy); separation methods (e.g., flow field fractionation, hydrodynamic chromatography); and detection techniques (e.g., light scattering, mass spectrometry). According to Howard, the FDA has established core centers with facilities, known as “NanoCore” centers, to provide its researchers with many of these tools and techniques for characterization and detection of the nanomaterials.

To wrap up the session, Andrew Bartholomaeus of Food Standards Australia New Zealand provided highlights of the recent FAO/WHO expert consultation report (FAO and WHO, 2009) on potential food safety implications and the future plans to assess safety of nanomaterials in food. The overall conclusion of the consultation was that “the current risk assessment approach used by FAO/WHO and Codex is suitable for engineered nanomaterials (ENMs) in food and agriculture, including the effects of ENMs on animal health” with a recognition that further work is needed in certain areas. The recommendations focused on three main areas: 1) monitoring of developments in potential uses; 2) effectiveness of current safety assessment procedures; and 3) stakeholder engagement. The group also recommended that the FAO and WHO take steps to support member countries in their engagement with their citizens and other stakeholders to build confidence in new technologies.

Regulatory Updates & Legal Implications
Similar to other new technologies, nanotechnology poses significant challenges to regulatory agencies, particularly as they look to act in a balanced but timely way to facilitate innovation while maintaining safety of the public and their confidence in the regulated products. The balancing act is hindered by the limited availability of safety assessment data. Many regulatory agencies around the world currently believe that their existing regulatory framework is sufficient to regulate nanotechnology-based products. However, because of limited publicly available data, regulatory agencies have adopted a “case-by-case” approach in assessing safety of products. They are also working to develop guidelines for nanotechnology development while encouraging the innovators to share data generated for their studies.

Annette McCarthy of the Office of Food Additive Safety at the Center for Food Safety and Applied Nutrition (CFSAN) of the U.S. FDA presented an update on the agency’s current thinking regarding factors to be considered in determining whether changes in manufacturing process for a food substance already in the market warrants a new regulatory submission to the FDA. The key is to evaluate whether the intentional reduction in particle size to the nanoscale affects identity, safety, and regulatory status of the food substance.

In December 2007, FDA released a guideline on food contact materials (Chemistry Guidance for Food Contact Notifications). Two additional guideline documents on food additive and color additives were recently developed, namely 1) Chemistry Guidance for Direct Food Additive Petitions (March 2009) and 2) Chemical and Technological Guidance for Color Additives for Food, Drugs, Cosmetics or Medical Devices (July 2009). Another document addressing the impact of all manufacturing changes, including nanotechnology, on regulatory status of food substances is under development. Obtaining generally recognized as safe (GRAS) status for nanoscale versions of materials may be difficult in the absence of sufficient toxicity data. Local and state jurisdictions are also working to develop their own regulatory scrutiny of nanomaterials.

The European Union (EU) does not have specific directives or regulations that address engineered nanomaterials in food packaging or food. Kelly Starosta of Keller and Heckman LLP noted that the EU is reviewing whether current directives and regulations inherently include ENMs or if they need to be modified to specifically address ENMs.

In discussing the legal implications of the current regulatory guidelines for nanotechnology-based products, Richard Canady of the Center for Human Health Risk Assessment at the International Life Sciences Institute and Ann Grimaldi of McKenna Long & Aldridge LLP highlighted regulations and guidelines at state, local, and international levels. One of the challenges is defining nanotechnology, which seems to vary across jurisdictions. The evolving regulatory landscape presents a moving target for liability and regulatory compliance preparation for the nanomaterials community. Because of the current lack of specific regulations and guidelines, the two speakers emphasized the need for industry to develop safety data using widely accepted methods and to consider lifecycle analysis of products for potential environment effects. With this information in hand, products will be well positioned to adapt to the changing regulatory landscape. 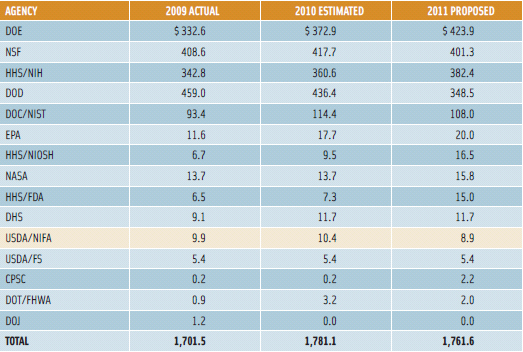 The major advances in nanotechnology have hinged on increasing investments in research and development by both governments and the private sector worldwide. The U.S. government, through its National Nanotechnology Initiative (NNI), is currently considered the global leader in government investments. The NNI is a federal program coordinating the activities of 25 federal agencies. According to Hongda Chen of the U.S. Department of Agriculture’s National Institute of Food and Agriculture (USDA/NIFA), nanotechnology research has seen a yearly increase in funding from $464 million in 2001 to $1.76 billion for fiscal year 2011 (NNI, 2010). Despite the hefty increase in overall funding, food and agriculture research (USDA/NIFA) has seen minimal increases and is in the bottom third of agencies receiving funding, with the majority of the funds going to research in sectors such as energy and defense (Figure 3). Investments by the private sector in food nanotechnology are not well documented in the U.S. 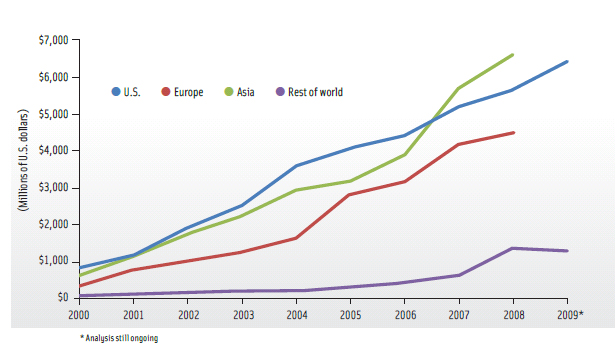 Similarly, the European Union (EU) has seen increasing investment in nanotechnology research and development over the years with overall funding being lower than the U.S. The major difference, as outlined by Chananit Sintuu of Lux Research, is that the EU investment funding is driven nearly equally by both the public and private sector. For example, the 2008 detailed breakdown of investment by sector showed government funding at 46% and corporate funding at 47%, with venture capital at 1%. The current investment trend shows a similar increase in Asian countries, which overall have overtaken both the U.S. and EU (Figure 4).

Overall, the participants felt that there is great potential for application of nanotechnology in the areas such as food safety, food quality, shelf life, food ingredient technologies, food packaging, and food processing. The greatest industry needs are in the areas of production, sustainability, and safety. Some of the direct benefits include clean water, improved health and wellness including increased nutrient bioavailability, improved flavor release, and preservation of perishable food. Suggestions for issues that need to be resolved in order to realize these benefits include increased research funding, cost-benefit analysis of various innovations, specific regulations (e.g., labeling), effective public engagement using diverse approaches, and increased communication among various stakeholders.

FAO and WHO. 2009. FAO/WHO expert meeting on the application of nanotechnologies in the food and agriculture sectors: potential food safety implications, June. Available at http://whqlibdoc.who.int/publications/2010/9789241563932_eng.pdf. Accessed July 30, 2010.

National Nanotechnology Initiative (NNI). 2010. Research and Development to a Revolution in Technology and Industry. Supplement to the President’s FY 2011budget. Available at http://www.nano.gov/NNI_2011_budget_supplement.pdf. Accessed July 30, 2010.