Historical salt references are found throughout many literary works, with the earliest written record of Chinese salt production around 800 B.C. (Kurlansky, 2002). Salt—a basic mineral—has been at the center of wars and religious and cultural practices, and used to generate financial gains. The value of salt in foods was recognized early on as a means to add flavor, control microbial activity, and increase product shelf life. As written by Kurlansky (2002), “Salt is so common, so easy to obtain, and so inexpensive that we have forgotten that from the beginning of civilization until about 100 years ago, salt was one of the most sought-after commodities in human history.” However, recent activities in the sodium landscape have changed that perspective and re-emphasized the important role that salt plays in foods systems. 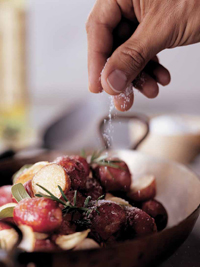 Monitoring the Sodium Landscape
According to the 2010 Dietary Guidelines for Americans, an inadequate diet and lack of physical activity are associated with overweight and obesity, cardiovascular disease, hypertension, osteoporosis, type 2 diabetes, and some types of cancer (USDA, 2010). A well-balanced diet is important for providing essential nutrients, such as sodium, to sustain a healthy physiological state. Consuming any nutrient in excess can lead to an undesirable state. For example, excess calories lead to increased body weight and excess sodium is associated with high blood pressure. Key recommendations for sodium are less than 2,300 milligrams (mg) per day and 1,500 mg per day for those that are 51 and older, African Americans, children, or have hypertension, diabetes, or chronic kidney disease (USDA, 2010). 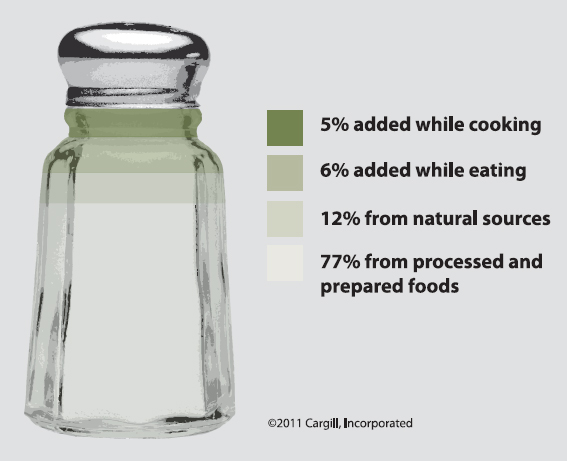 Consumers are becoming more aware of their sodium intake, with 43% of consumers checking product labels for “low sodium” claims (HFI, 2009). Although the recommended sodium intake is 2,300 mg per day for about half of the population, the averageconsumption is 3,400 mg (CDC, 2010), with 77% of the sodium coming from processed and restaurant foods (Figure 1; Mattes and Donnelly, 1991). The National Salt Reduction Initiative has asked food manufacturers to consider reducing salt levels in packaged and restaurants foods to help Americans achieve a 20% reduction of their salt intake (DOHMH, 2011). In addition to the U.S., other countries or unions, such as Canada (HC, 2010) and Europe (CEU, 2010), are also publishing recommendations around sodium intake and levels in food products. From a consumer perspective, 50% intend to decrease their sodium intake, but won’t sacrifice taste (NMI, 2008). As a result, food manufacturers are developing new or reformulating existing food products to reduce sodium. The challenge for the food industry is to produce products that help consumers manage their sodium intake, without compromising taste.

Sodium Sources and Functionality
With consumer interest around healthier diets and lifestyle, food manufacturers are marketing products as “better for you”. Emphasis has been placed on solutions such as higher protein and fiber and lower calorie, fat, sugar, and sodium levels. Considering reformulation, a food product developer may be faced with new technical challenges ranging from sensory (e.g., taste, texture), product yield, food safety, to product manufacturing. 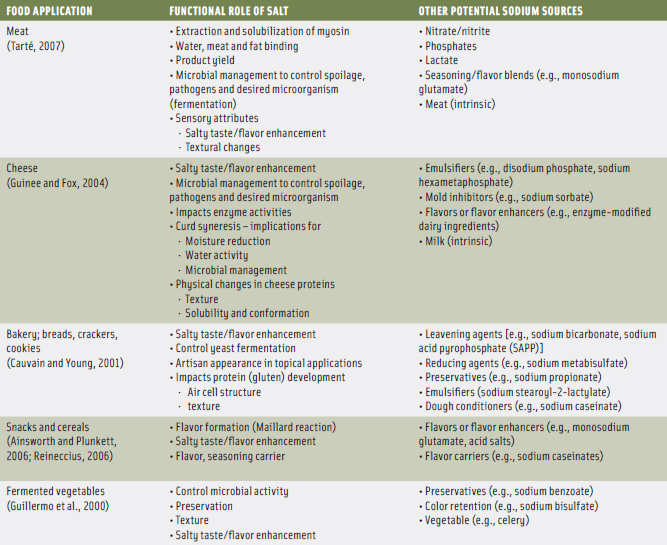 In the case of formulating lower sodium food products, a developer must consider the source of sodium and the functional role of the sodiumcontaining ingredients in order to be successful (Table 1). There are many sources of sodium, including salt, leavening agents (e.g., sodium bicarbonate), flavoring agents (e.g., monosodium glutamate), and the food itself (e.g., celery). In most cases, the sodium-containing ingredient has a role in creating the desired finished product. Therefore, the implications of removing any of these ingredients from a formula must be fully considered to ensure there is no compromise in the product integrity.

Microbial Management
Under appropriate environmental conditions, the nutrients in food will support growth of spoilage organisms that can lead to undesirable changes in product quality. In addition, pathogens may also thrive, which can lead to food poisoning by the organism itself or toxins produced by the organism. However, in some food products (e.g., natural cheese), key organisms (e.g., starter cultures) are required to create the desired taste and texture for an enjoyable eating experience.

Food manufacturers can manipulate ingredients or processing conditions to create an environment that promotes growth of desirable organism and minimizes or eliminates undesirable ones. Early on, salt has played an important role in food preservation. In foods, salt lowers the water activity (aw), thereby making water unavailable for the microorganisms (Betts et al., 2007). High salt concentration also promotes water migration out of the microbial cell. As a result, a cascade of events occurs (i.e., inactivation of cellular enzymes) that ultimately leads to loss of microbial growth or survival (Brewer, 2000). The aw required to sustain cell viability is microorganism dependent. 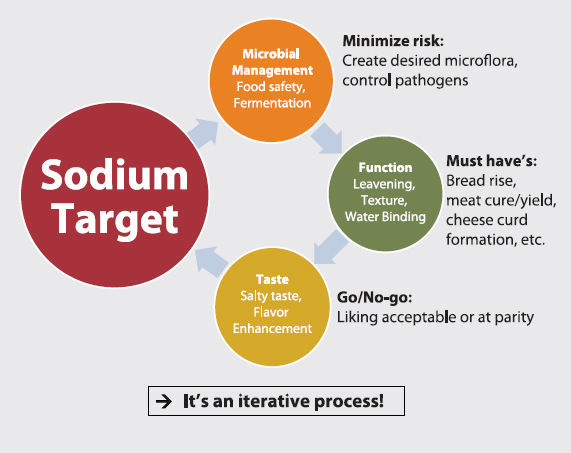 Functional Role of Salt in Key Food Applications
Salt is used in many food applications (e.g., sauces, dressing, and canned vegetables) because of its unique salty flavor profile and flavor enhancement properties. However, for other categories (e.g., meat and cheese), salt provides other unique functional roles such as extended product shelf life, increased product yield, and control of microbial fermentation (Table 1). As a result, there is a delicate balance between removing salt and achieving desired product attributes (Figure 2).

Since ancient times, salt was valued for its flavor impact and preservative action in meat products. The addition of salt in meat products increases the ionic strength to help extract and solubilize meat proteins (Sebranek, 2009). The salt-soluble proteins are important for their water retention, fat and meat binding, and heat-set gelatinization properties that lead to increased product yield and textural sensory attributes.

The vast number of different types of natural cheese and the fact that each one contains four basic ingredients (milk, starter culture, enzymes, and salt) clearly demonstrates the important role salt plays in cheese production. In cheese, salt is required for flavor and flavor enhancement, controlling microbial and enzyme activity, accelerating syneresis and preservation (Guinee and Fox, 2004).

In bakery products, salt impacts the protein (gluten) development, which results in a less sticky dough and firmer texture (Cauvain and Young, 2001). In yeast-leavened breads, salt controls the microbial growth and therefore, the rate of gas formation. Proper protein and gas formation are critical for small and uniform cell distribution throughout the loaf.

Strategies to Reduce Sodium
When designing a food product to achieve a desired sodium target, one of the first considerations is the sources of sodium-containing ingredients. Understanding the role of those ingredients and knowing options for non-sodium alternatives allow for greater flexibility and success in the final solution. Most importantly, food safety should never be compromised in the final solution and a review of other environmental treatments, such as thermal, should be incorporated into the design.

Food safety issues are generally the first priorities for food manufacturers when considering reduced-sodium products. Salt is very effective at lowering aw, however, there are other food ingredients, such as potassium chloride and sucrose, that are also effective (Toaukis and Richardson, 2007). Alternative ingredients may require a different usage level to achieve the desired aw and may impart changes in the flavor profile or other functional attributes of salt. Therefore, additional solutions may be required to achieve the desired food product qualities.

In addition to aw, there are other factors that can help control microbial activity (Betts et al., 2007). Intrinsic factors are characteristics of the food and ingredients (e.g., pH, aw) or are sometimes added for specific function (e.g., sodium benzoate as a preservative). Environmental or extrinsic factors, such as heat, nonthermal (e.g., high pressure), modified-atmosphere packaging, and storage temperature, are also effective at controlling microbial growth. The level of ingredient or environmental treatment required to control growth is microorganism dependent.

The contribution of salt to flavor is unique and no other single ingredient is as effective across all food applications. When removing salt from a formulation, the flavor profile may change. Building back the flavor profile may require more than one ingredient. Compounds that have been used to replace the flavor of salt include potassium chloride, yeast extracts, monosodium glutamate, flavors, and spices. 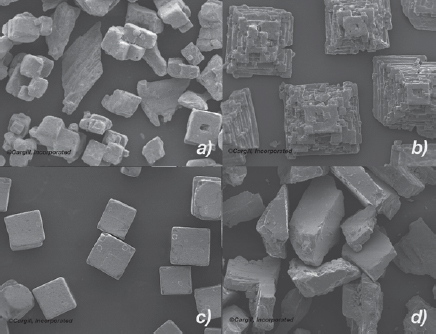 To replace other functional attributes, such as water and fat binding, hydrocolloids or vegetable proteins are commonly used. Potassium chloride is also effective. However, at high concentrations of potassium chloride, bitter and metallic notes are often detected.

Another factor that food manufacturers need to consider is the cost of the final solution. Salt is one of the lower cost ingredients and just removing it from the formulation may increase cost. Similarly, non-sodium ingredients or flavor alternatives for salt may alter the cost-in-use. Therefore, a carefully designed plan that optimizes alternative ingredients (functionality and cost), processing options, and food safety considerations will ensure success in the market.

Summary
Recent changes in the sodium landscape and consumers’ desire for better for you-type products have created new challenges for the food industry. Considering the technical challenges, and in particular food safety, the food industry needs to work together to help the entire food system, including policymakers and nongovernment organizations, to make informed decisions. For example, the Innovation Center for U.S. Dairy recently hosted the Best Practices Task Force meetings to discuss and proactively address key issues associated with reduced-sodium cheese. Meeting members included the manufacturing industry (cheese manufacturers and ingredient suppliers), academia, and dairy trade associations. The group has identified three focus areas for reduced-sodium cheese. They are 1) maintaining taste and functionality, 2) process control in manufacturing, and 3) education.

Food processors are not the only part of the industry facing the better-for-your challenge. Recent activities around school lunch programs (FDA, 2011a) and menu labeling (FDA, 2011b) will impact the foodservice industry. This is another good opportunity for the entire food industry to share knowledge on technical solutions and consumer education.