We are frequently reminded of the urgent need for a safer food supply by large-scale foodborne disease outbreaks and the frequency of massive food recalls. This was chillingly illustrated by the impact of the deadly enterohemorrhagic (EHEC) E. coli O104:H4 German outbreak in 2011 that resulted in more than 50 deaths, numerous serious illnesses, and tremendous economic damage to the European produce industry. EHEC E. coli and its cousinSalmonella are two of the most frequent causes of food recalls in the United States, illustrating that measures for controlling just these two gram negative enterobacteria are woefully inadequate. There clearly is an urgent need for more antimicrobials that can be utilized to impart increased security to our food supply system against a broader range of potential foodborne pathogens. These, of course, need to be antimicrobials that are safe and “natural” as there is an equal consumer concern over the use of chemical preservatives in foods. Given the passage of the Food Safety Modernization Act (FSMA) in 2011, which requires the implementation of preventative measures against foodborne pathogens, this likely will be an essential component of the implementation of this law.

Antimicrobial Peptides
Natural antimicrobial peptides from food-grade sources provide an excellent opportunity to supply this increased safety assurance to the food supply system. There are no adverse consumer concerns about incorporating natural peptides in foods that are digested upon ingestion but have the increased functionality of antimicrobial activity while in the food system. Bacteriocins are peptide-based antimicrobials that are produced by many bacteria to inhibit competing bacteria in their habitat. This is just one of many “competitive” features that bacteria can use for successful establishment in an environment.

While many bacteriocins have a very small spectrum of antimicrobial activity, often limited to closely related species or even to just different strains within the same species, some do have a broad range. This particularly applies to the lantibiotics, which are a subclass of bacteriocins that undergo post-translation modifications, such as dehydration and cyclization reactions and, in some cases, the addition of groups to specific amino acids, thus forming novel amino acid structures (Willey and van der Donk, 2007). The effect of these modifications can greatly influence the stability of the peptide, thus making it more resilient to food processing conditions, as well as the antimicrobial spectrum.

Nisin, produced by certain strains of the cheese starter culture Lactococcus lactis, was the first lantibiotic to be characterized, having been first identified as a non-acid antimicrobial inhibitor in 1928 (Rogers and Whittier, 1928). It exhibits a broad spectrum of antimicrobial activity among gram positive bacteria, specifically by binding to the membrane-bound lipid II precursor for peptidoglycan synthesis, leading to pore formation in the cell membrane and inhibition of cell wall synthesis. The outer membrane of gram negative bacteria provides a barrier, preventing it from binding lipid II. Nisin has numerous applications as a natural, peptide-based food preservative in many foods worldwide. As a purified food ingredient, it has just one application approved by the Food and Drug Administration in the U.S.; that is to prevent the outgrowth of Clostridium botulinum spores in processed cheese. However, as nisin and many other bacteriocins are produced by food-grade lactic acid bacteria (LAB), the fermentation of foods such as whey-based materials with these cultures can generate a food matrix naturally enriched with these antimicrobial peptides. Spray drying these matrices can create a natural antimicrobial dairy-based ingredient that can be utilized widely in the food industry to protect against gram positive spoilage and pathogenic bacteria.

While many different foods can form the basis for these functional ingredients, dairy provides an ideal medium as dairy fermentations such as cheese result in whey-based by-products that form very suitable fermentation substrates for LAB that are also cost-effective. This strategy forms the basis of some shelf-life extenders or similar food-grade antimicrobial products in use today. While this provides good protection against gram positive bacteria, gram negative bacteria provide an area of vulnerability for a food industry that wants to avoid chemical preservatives. 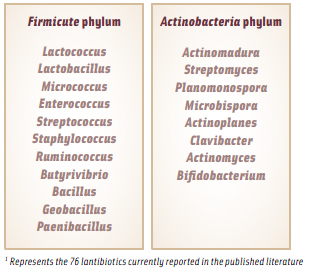 The vast majority of lantibiotics that have been characterized to date are produced by gram positive bacteria from the Firmicute phylum of bacteria, which are characterized by a low G+C (guaninecytosine) content in their DNA. This includes the LAB, which are the most relevant to the food industry. See Table 1 for a list of the bacterial genera from which lantibiotics have been isolated. However, some members of the Actinobacteria phylum (characterized by a high G+C content) have been found to produce lantibiotics with novel modifications and increased antimicrobial functionality. For example, microbisporicin produced by Microbispora coralline was found to contain two unusual modifications, a chlorinated tryptophan and two hydroxyl proline residues, and its antimicrobial activity extended to some gram negative bacteria, specifically Moraxella catarrhalis, Neisseria spp., and Haemophilus influenza (Castiglione et al., 2008). While its antimicrobial activity didn’t extend to the enterobacteria, it did demonstrate the potential for lantibiotics to overcome the outer membrane protection barrier of gram negative bacteria to exert its antimicrobial properties. Recently in my laboratory, a novel strain of Bifidobacterium longum was shown to have the potential to produce a lantibiotic that also exhibited activity against gram negative bacteria, including the enterobacteria, highlighting the potential for increasing the availability of natural peptide-based antimicrobials for broad-spectrum control of both gram positive and gram negative pathogens in our food system (O’Sullivan and Lee, 2011). 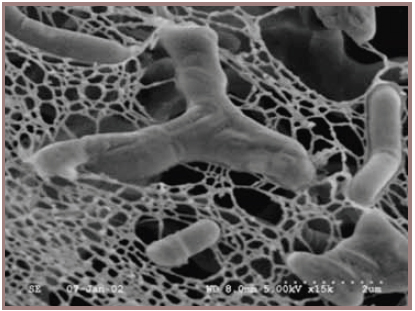 Bifidobacteria also belong to the Actinobacteria phylum and are important as probiotic cultures in the food industry. They are frequently incorporated in foods such as yogurts and other fermented milks solely for their potential probiotic attributes. The association of bifidobacteria with good intestinal health first occurred over a hundred years ago when the pediatrician Henri Tissier at the Institute Pasteur in Paris, France, noted that the stools from healthy breast-fed infants were dominated by irregular rods or “bifid” shaped bacteria (Figure 1), which were conspicuously absent from stools of babies with infantile diarrhea (Tissier, 1900). He even treated infantile diarrhea by feeding bifidobacteria (then called Bacillus bifidus) to infants (Tissier, 1906), which likely represents the first deliberate example of our current probiotic concept. Subsequent studies throughout the last century also established an association between the declining numbers of bifidobacteria in the stools of older people and a corresponding increase in other microbial groups, such as clostridia and enterobacteria (Mitsuoka and Hayakawa, 1973).

While the general association of bifidobacteria with good intestinal health is widely accepted, the health effects of ingesting bifidobacteria cultures in foods is not sufficiently scientifically validated, a position currently echoed by the European Food Safety Authority (EFSA). This may well be due to the choice of current strains that are used for bifidobacteria cultures in foods, which were isolated and characterized without the benefit of the current understanding(which is still incomplete) of what characteristics are important for bifidobacteria functionality in the gut. This may explain the rapid disappearance of ingested bifidobacteria cultures from the gut following cessation of feeding (O’Sullivan, 2005). To further investigate this issue, a research project in my laboratory examined available commercial and culture collection strains for the production of siderophores (iron chelators) during growth on buffered low iron media. The rationale for this is that scavenging for iron is vital for successful competition in environments of physiological pH, given the insolubility of iron at this pH (Neilands, 1981; O’Sullivan and O’Gara, 1992). While siderophore-like compounds were not detected from these cultures, new intestinal isolates of bifidobacteria did display this ability (O’Sullivan, 2004). This was one of the criteria used to select B. longum DJO10A as a representative of an intestinal strain of B. longum that has undergone minimal attenuation. 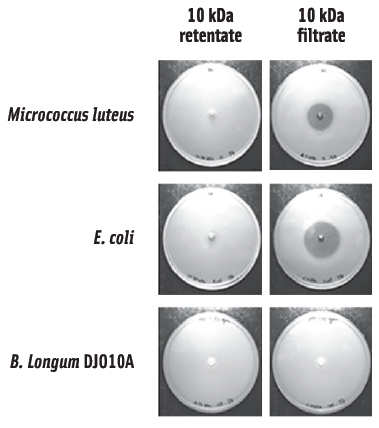 To evaluate potential genomic differences that may exist between intestinal and available culture collection strains, the complete genome sequence of B. longum DJO10A was deciphered and compared to the culture collection strain, B. longum NCC2705. This analysis revealed two very similar genomes, with the major difference being a smaller genome in strain NCC2705, primarily due to the absence of large “chunks” of DNA that are present in strain DJO10A (Lee et al., 2008). Interestingly, these DNA regions encoded features that would be predicted to be important for competition in the gut, but not useful in pure culture. One of these features was a lantibiotic, which has obvious implications for competition in the gut, but not in pure culture. Based on this comparative genomic analysis (as well as bioinformatic predictions), it suggested the possibility that prolonged culturing of bifidobacteria in pure culture environments may promote the loss of DNA regions that are no longer needed. To experimentally validate this hypothesis, B. longum DJO10A was cultured in pure culture for 1,000 generations and then examined to see if it lost some of the DNA regions that were predicted to have been lost from strain NCC2705. This revealed the loss of the lantibiotic gene cluster in an almost identical deletion event that was predicted from strain NCC2705, confirming the hypothesis. Subsequent analysis revealed that B. longum DJO10A did not produce any lantibiotic during growth in broth cultures, but did produce a small amount during growth on agar media. This enabled a crude preparation of the lantibiotic to be obtained and bioassays with this revealed antimicrobial activity against both gram positive and gram negative bacteria (Figure 2). 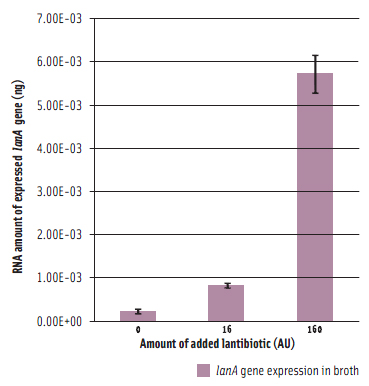 The production of dairy ingredients from fermentation with lantibiotic-producing food-grade cultures holds tremendous promise for the development of broad-spectrum antimicrobial ingredients based on natural peptides. While the LAB currently provides some lantibiotics with broad-spectrum antimicrobial activity against gram positive bacteria, they have minimal effect on gram negative bacteria. The bifidobacteria hold the promise for supplying lantibiotics that go beyond the gram barrier and potentially supply natural peptide antimicrobials effective against the enterobacteria. The molecular understanding of the regulation of lantibiotic production by B. longum DJO10A provides the foundation for this possibility by showing that production of its broad-spectrum lantibiotic under fermentation conditions should be feasible by disabling its repressor system or understanding how to control it. This should expand the range of peptide-based antimicrobial ingredients that have efficacy against the enterobacteria and limit the vulnerability of our food supply to these prevalent pathogens.

The production of dairy ingredients from fermentation with lantibiotic-producing food-grade cultures holds tremendous promise for the development of broad-spectrum antimicrobial ingredients based on natural peptides. While the LAB currently provides some lantibiotics with broad-spectrum antimicrobial activity against gram positive bacteria, they have minimal effect on gram negative bacteria. The bifidobacteria hold the promise for supplying lantibiotics that go beyond the gram barrier and potentially supply natural peptide antimicrobials effective against the enterobacteria. The molecular understanding of the regulation of lantibiotic production by DJO10A provides the foundation for this possibility by showing that production of its broad-spectrum lantibiotic under fermentation conditions should be feasible by disabling its repressor system or understanding how to control it. This should expand the range of peptide-based antimicrobial ingredients that have efficacy against the enterobacteria and limit the vulnerability of our food supply to these prevalent pathogens.

Daniel J. O’Sullivan, Ph.D., a Professional Member of IFT, is a Professor
in the Dept. of Food Science and Nutrition, University of Minnesota,
1334 Eckles Ave, St. Paul, MN 55108 ([email protected]).