March 1, 2012
Share +
Foods and food ingredients are increasingly exported and imported worldwide, and differing quality specifications and regulatory systems around the world make commerce difficult. International harmonization of standards, regulatory requirements, and procedures would facilitate international trade and lead to improved safety and quality of foods traded around the world. Accordingly, many organizations are working to harmonize specifications and regulations concerning product identity and quality as well as safety. This month’s Food Safety & Quality column describes some of the major players and their activities in standardization and harmonization efforts. 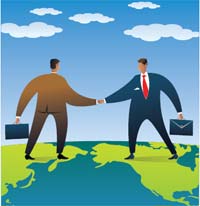 American National Standards Institute
The American National Standards Institute (www.ansi.org), founded in 1918, oversees the creation, promulgation, and use of voluntary consensus standards and conformity assessment systems guidelines for nearly every industrial sector. It is also engaged in accrediting programs that assess conformance to standards, such as those of the Conference for Food Protection.

Codex Alimentarius Commission
The Codex Alimentarius Commission (www.codexalimentarius.org), created in 1963, is an intergovernmental body with more than 170 members. It develops food standards, guidelines, and codes of practice under the Joint Food Standards Program established by the Food and Agriculture Organization of the United Nations (FAO) and the World Health Organization (WHO) and promotes coordination of all food standards work undertaken by international governmental and nongovernmental organizations.

Codex publishes the Codex Alimentarius, a collection of internationally adopted food standards, guidelines, codes of practice, and other recommendations. They are based on the best available science, independent international risk assessments, and ad-hoc consultations organized by FAO and WHO. The standards, while voluntarily adopted, serve in many cases as a basis for national legislation and provide benchmarks in settling international trade disputes. Codex approved 24 new work projects at its 34th session in July 2011 and will hold its 35th session July 2–7, 2012, in Rome, Italy.

Conference for Food Protection
The Conference for Food Protection (www.foodprotect.org), established in 1971, provides a forum for representatives of regulatory, industrial, academic, and professional organizations and consumers to identify problems, formulate recommendations, and develop and implement practices that ensure food safety. The organization has identified the essential components of a nationally recognized Food Protection Manager Certification Program and established a mechanism to determine whether certification organizations meet these standards. The organization has also held workshops on harmonization of U.S. food regulations as well as on global fresh produce safety for retail and foodservice.

The FDA points out that harmonization must facilitate international trade and promote mutual understanding while protecting national interests and establishing a basis to resolve food issues on sound scientific evidence in an objective atmosphere. Failure to reach a consistent, harmonized set of laws, regulations, and standards within the free trade agreements can result in considerable economic repercussions.

Global Food Safety Initiative
The Global Food Safety Initiative (GFSI) (www.mygfsi.com), a program that aims to harmonize international food safety standards with the support of the world’s top retailers and food manufacturers, was launched in 2000. It provides a platform for collaboration among food safety experts from retail, manufacturing, and foodservice companies; service providers associated with the food supply chain; international organizations; academia; and government.

Technical working groups define food safety requirements along the entire food supply chain and achieve consensus on the skills, knowledge, and attributes that auditors should possess. The organization states that harmonizing worldwide food safety standards would increase transparency and efficiency in the supply chain, cut costs, and provide assurance of safe food for consumers worldwide.

In August 2011 the GFSI published version 6.1 of its GFSI Guidance Document, which specifies the requirements that a food safety scheme must implement to be considered for GFSI recognition and defines the key elements for the production of safe food and feed that must be included in the standard, based on the food safety principles issued by the Codex Alimentarius Commission, the National Advisory Committee on Microbiological Criteria for Foods, relevant ISO standards, and international codes of practice. The GFSI will hold its next annual Global Food Safety Conference in February 2013.

Huub Lelieveld, GHI President, said that members of the GHI are individual scientists employed by all kinds of organizations and industries around the world, serving on a voluntary basis. There are a number of active working groups on such subjects as nanotechnology, mycotoxins, food safety aspects of religious foods, and others. The working groups do not duplicate work that has already been done, he said, but use available material and make recommendations for further research if the information available is insufficient.

The GHI also has an ambassador program, in which GHI members in many countries communicate locally with the scientific community in local languages. There are ambassadors in such countries as Bangladesh, Russia, Ukraine, Thailand, and China, Lelieveld said, and the number is growing.

Institute of Food Technologists
Since 1992 IFT (www.ift.org) has participated in various Codex committees and task forces, including committees on food additives, contaminants, and labeling, as a nongovernmental organization with observer status. Numerous papers and symposia on harmonization have been presented at IFT Annual Meetings, and articles and editorials on the subject have been published in Food Technology over the years.

A symposium on international harmonization took place at the 2011 IFT Annual Meeting. Roger A. Clemens, IFT President and Chief Scientific Officer at Horn, discussed how compendia of quality standards for food ingredients, such as Food Chemicals Codex, aid in international harmonization. Dennis M. Keefe, Director of the FDA’s Office of Food Additive Safety, said that the Codex Alimentarius Commission’s standards serve as the benchmark for food safety and are vital for international trade. He said that the specifications of identity and purity developed by the FAO/WHO Joint Expert Committee on Food Additives are critical to the Codex standard-setting activities but that there is a need for specifications of identity beyond the constraints of the Joint FAO/WHO Food Standards Program. William F. Koch, Chief Standards Acquisition and Metrology Officer at U.S. Pharmaceopeial Convention (USP), discussed USP’s reference standards, saying that comparison of measurement results to specifications for the quality and authenticity of food ingredients becomes meaningful only if the measurement results can be traced back to a reference standard.

International Life Sciences Institute
The International Life Sciences Institute (ILSI) (www.ilsi.org) is a nonprofit, worldwide foundation established in 1978 to advance the understanding of scientific issues relating to nutrition, food safety, toxicology, risk assessment, and the environment. It brings together scientists from academia, government, industry, and the public sector to develop a balanced approach to solving problems of common concern for the well-being of the general public. ILSI receives financial support from industry, government, and foundations and has branches around the world. It is affiliated with WHO as a nongovernmental organization (NGO) and has specialized consultative status with FAO. ILSI also participates in Codex as an NGO observer organization.

An example of ILSI’s efforts is the harmonization of Recommended Dietary Allowances (RDAs) in Southeast Asia. ILSI’s Southeast Asia Region, with FAO support, organized workshops and meetings from 1997 through 2003 to help countries and government agencies update national RDAs based on the latest science and the utilization of national data. The meetings provided a platform for the development of a harmonized set of RDAs for use as references by southeast Asian countries.

Organization for Economic Co-operation and Development
The Organization for Economic Co-operation and Development (www.oecd.org), established in 1961, is an intergovernmental organization of 34 member countries whose mission is to promote policies that will improve the economic and social well-being of people around the world. It provides a forum in which governments can work together to share experiences and seek solutions to common problems. Among other things, it develops international standards for seeds, forestry reproduction material, fruits and vegetables, and guidelines for environmental practices.

United Fresh Produce Association
The United Fresh Produce Association (www.unitedfresh.org) recently finalized its Good Agricultural Practices (GAP) Harmonization Initiative. The goal was to develop a harmonized food safety standard and checklist for GAP audits and a globally acceptable auditing process that would protect consumers from potential hazards that may contaminate produce at that stage of the supply chain and would build efficiencies into the supplier audit process. This would result in one audit by any credible third party, acceptable to all buyers. The initiative is part of the Global Partnership for Good Agricultural Practices.

U.S. Pharmacopeial Convention
USP (www.usp.org) is a nonprofit scientific organization that sets standards for the quality, purity, identity, and strength of medicines, food ingredients, and dietary supplements manufactured, distributed, and consumed worldwide. USP’s drug standards are enforceable in the United States by the FDA and are developed and relied on in more than 130 countries.

USP publishes Food Chemicals Codex (FCC), a compendium of internationally recognized standards for the purity and identity of food ingredients. It features more than 1,000 monographs on food-grade chemicals, processing aids, foods, flavoring agents, vitamins, and functional food ingredients. Published since 1966, FCC plays a key role in safeguarding commerce and public health by providing essential criteria and analytical methods to authenticate and determine the quality of food ingredients. The standards are used in purchasing transactions and in helping manufacturers distinguish genuine products from inferior or adulterated ingredients and substances. The 8th edition of FCC is expected to be published this month.

Still a Long Way to Go
Despite all the efforts being undertaken, there is still a long way to go before food safety and quality standards are harmonized worldwide, IFT’s Clemens said. Harmonization, though well-intentioned, is extremely difficult and slow, and little progress is being made. In his experience in areas such as toxicants and residue levels in a variety of foods, he said, there is no harmonization, and in most cases maximum levels are not based on any scientific evidence. He added that there are many opportunities for food scientists and technologists to further the work toward harmonization through IFT and other organizations.

General Discussion on Harmonization
An excellent article titled “Global Harmonization of Standards,” written by Salil Deshpande and John W. Nazemetz of Oklahoma State University, focuses on international standardization of technologies but not specifically on food safety and quality. The 2002 article provides an overall discussion of the need for international harmonization and how it is being addressed.

Standards & Certification
The following are some global food safety and quality standards and some of the many organizations providing auditing and certification services.