The first step in increasing food security in Africa is “to put smallholder farmers at the center of all our efforts and enable them to increase their incomes, improve their livelihoods and lift themselves out of poverty,” stated Nobel Peace Prize winner Kofi Annan. A majority of the food produced in sub-Saharan Africa comes from smallholder farmers, mostly women. The former Secretary-General of the UN is profiled in the article “Fighting for African food security” authored by Rebecca L. Weber.

The article is part of a series on Africa published on the FutureFood 2050 website www.futurefood2050.com. FutureFood 2050 is a multifaceted communications program of the Institute of Food Technologists (IFT). In celebration of its 75th anniversary this year, IFT and FutureFood 2050 is publishing 75 articles with food scientists, thought leaders and policy makers on viable approaches and solutions to the challenges of feeding 9+ billion people by 2050. The program also includes a documentary film that is scheduled to be released in 2015. 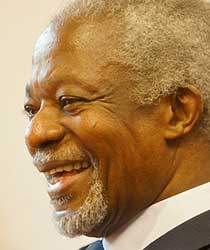 Kofi Annan
Along with focusing on smallholder farmers to boost food security, Annan believes “we need to promote visionary leadership for agriculture and food systems, and put in place the right policies and incentives to scale up investment—including through more private sector engagement—and amplify the positive transformations taking place.” He added “we have to understand that nutrition is critical for people’s health and development. We therefore must adopt policies that improve access to nutritious food, and promote healthy and sustainable diets, particularly for children and caregivers.”

Unlocking Africa’s agricultural potential will require technologies “related to the improvement of seed varieties, soil fertility enhancement practices and efficient use of water—both for rain-fed and irrigated methods of farming. On-farm adaptive research is much needed by African researchers, who could also benefit from external assistance,” noted Annan.

“Given that today Africa’s agricultural yields are less than half the global average, Africa can achieve significant progress through conventional breeding systems—without having to venture into genetic engineering, for which the required institutional, legal and regulatory capacities are nonexistent in the large majority of African countries,” declared Annan.

Jane Karuku
“We’re working on a post-harvest study to ensure that farmers’ productivity is not getting lost through post-harvest losses, which is very high right now,” declared Jane Karuku in an article “Investing in Africa’s Green Revolution” authored by Bob Swientek. “We want to get the real data … what’s the real value we’re losing through post-harvest? There’s an argument that we lose up to $3 billion a year in terms of post-harvest losses. But is that number true? And if it’s true, what are interventions we could do to try and reduce this post-harvest loss? Because even a 10% or 20% decrease of the current value right now would actually go a long way toward food security.

“The study involves 11 countries across 11 value chains. It has been going on for six months and should be complete in [August 2014]. Some preliminary findings are confirming what we already knew. Post-harvest losses are huge, and it happens at different points in the value chain from the farm, harvesting, storage, transport and in the marketplace. We want to share the results of the study with the practitioners across the value chain and partners—governments, donors, donor development partners, private practitioners, policy makers—whoever is a stakeholder in that part of the chain and guide them in making better decisions as they move on with their work. It’s all about food security.”

Ababacar Sadikh Ndoye
About 2.2 million people, or 16% of Senegal’s population, were food insecure in 2013. “I think if we work on these questions of self-sufficiency [and] general food security … lots of problems will be resolved for the young people,” stated Ababacar Sadikh Ndoye in an article “Why Senegal is banking on processed foods” authored by Sarah DiLorenzo.

Ndoye, a food scientist whose training was primarily in cereal chemistry, has spent his career trying to encourage the Senegalese to return to native foods like millet, sorghum and cowpeas (a legume). He has led much of the Dakar, Senegal-based institute’s work in adapting ways to process local grains, for example, to make them more attractive to consumers and preserve them longer while raising local farmers’ incomes by adding value to their crops.

“All the [food processing] technology that has been developed in the northern [developed] countries will come, that’s clear,” declared Ndoye. “There’s no doubt that the processing (in Africa) is going to see an extraordinary leap in the coming years.” 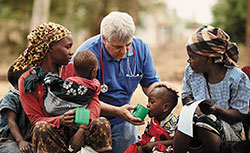 Dr. Mark Manary
Dr. Mark Manary is the founder of Project Peanut Butter (PPB)—a nonprofit that operates in Malawi and Sierra Leone and is expanding into Ghana. PBB works to advance treatment of severe acute malnutrition (SAM) using locally produced ready-to-use therapeutic foods (RUTFs). High-energy RUTF pastes typically are made from peanuts, oil, sugar and milk powder, along with vitamin and mineral supplements. During the past decade they have emerged as a safe, spoilage-resistant, cost-effective option that makes it possible to treat children at home, saving hundreds of thousands of children’s lives since the early 2000s, mainly in Africa.

“For decades malnutrition was viewed as a hopeless condition, not as an illness that could be treated. It was marginalized in the health and medical community,” stated Manary in an article “Peanut butter that saves lives” authored by Jennifer Weeks. “But these supplements work, and we should make them as widely available as possible.” PPB alone has treated approximately 600,000 children, and Manary has set a goal of saving 2 million children by 2015.

Ruth Oniang’o
Three decades ago Ruth Oniang’o founded the nonprofit Rural Outreach Africa, which deals with nutrition and food security in Kenya. In 2003, Oniang’o began a five-year term as a member of Parliament in Kenya, advocating for passage of bills addressing biosafety and nutritionists and dietetics. And internationally, she has worked on nutrition policy with the Food and Agriculture Organization (FAO), World Health Organization (WHO), and the Gates Foundation.

Today Oniang’o, who is formally retired but still works in her field, sees tremendous opportunities and challenges for her continent. “The light is shining on Africa right now,” said Oniang’o in an article “Making good nutrition more accessible in Africa” authored by Rebecca L. Weber. “Unfortunately, we still face food insecurity and civil strife. There’s opportunity for us to make headway, to develop economically, to feed our people.

“So much is undone,” she adds. “We still depend on rain; only 4% of irrigable land in Africa is actually irrigated. Hybrid grains—we don’t use it. These oppositions to technology don’t work for us.” Getting to a place of greater African food security, she believes, requires more investment of time in understanding the local context, rather than just assuming technology that works in the developed world will work in Africa.

Calestous Juma
“The rising concern over the impact of climate change on agriculture will significantly shape the way Africa approaches agriculture,” stated Calestous Juma in an article “The politics of food technology innovation for Africa” authored by Lisa Palmer. “It is no longer possible to rely on folk knowledge as the key guide for farming.”

As part of his work, Juma advises high-level leaders, especially African presidents, on the role of technology in agriculture. “I am guided by the view that the application of science and technology to agriculture requires extensive coordination across many actors and sectors,” noted Juma. “It is essentially a political process, and political leadership is essential. For this reason, I have been working closely with the African Union and have chaired a number of high-level panels to guide presidents on biotechnology in particular and science and technology in general.”

“Africa will be able to feed itself in a generation provided it can invest in infrastructure, higher [level] technical training and promote regional trade,” said Juma. “By learning to trade regionally, Africa will also increase its chances to play a bigger role in international food trade.” Energy, transportation, irrigation and telecommunication improvements are all essential, he said.

To read these stories in the Africa series, please visit www.futurefood2050.com.