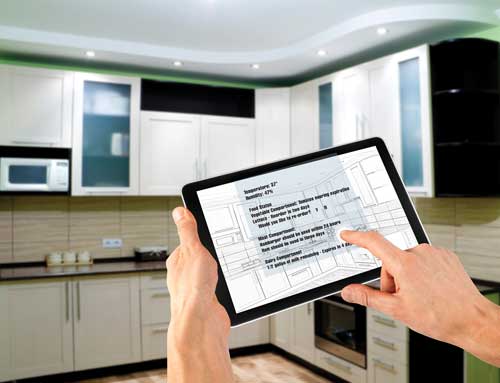 While consumers seem to have a penchant for simpler foods that are closer to nature, this pastoral view of food does not apply to their kitchens. No one is demanding a return to ice boxes, open hearth cooking and root cellars. Instead, kitchen appliances and gadgets are becoming more high-tech with 21st century connectivity and artificial intelligence right around the corner, according the latest interview series on Kitchen of the Future from FutureFood 2050––a multiyear communications program from IFT highlighting the global visionaries who are leading the effort to find solutions to sustainably feed 9 billion-plus people by 2050.

By the year 2050, the kitchen may no longer even be a kitchen as we know it. Instead, its elements may be incorporated into the living room, with embedded appliances disappearing into walls and working surfaces, predicts Thomas Johansson, design director, Electrolux, in an article “Will there be kitchens in 2050?” authored by Naomi Lubick.

The fridge, for example, could be a series of a dozen hexagonal-shaped storage spaces set into a living room wall, adjacent to the ovens and “smart” pantry. As imagined for a design in the 2014 Electrolux Design Lab competition, each container would use a vacuum system to extend the life of the food inside. The modules would set their own internal temperatures and humidity based on the types of foods they hold.

Johansson hypothesizes that instructions might be embedded on the containers and in the wrappers housing the foods, perhaps using nanomaterials or other labeling. A piece of meat wrapped in “smart” plastic with nanosensors, for instance, would be able to communicate to the refrigerator that it is a 1-lb steak. In addition to keeping food fresher, says Johansson, these technological advances would result in less spoilage and food waste.

In the same way that a smart refrigerator might work in the future, a smart pantry would maintain a log of its contents, says Johansson, while storing different foodstuffs that don’t require refrigeration but might need some other kind of treatment. Perhaps a slightly cooler level would store potatoes and root vegetables, while cameras would scan packages on the shelves so the pantry could consult with the refrigerator on recipes that require baking ingredients like flour or sugar.

Meanwhile, a smart oven set into the wall next to the refrigerator modules might be able to detect the humidity and internal temperature of the food it cooks. When the oven cooks a juicy steak, says Johansson, it could scan the meat with color and thermal detectors to make sure the end result is just the way he likes it—rare.

Johansson says the ultimate goal for the next generation of kitchen technologies is individual health and well-being. Linking kitchen appliances to personal devices that monitor blood sugar levels, dietary habits, and prescriptions or other medicines would enable the appliances to use this information in evaluating the family’s food needs. This would require “smart” machines linked to larger systems via the Internet and internal information “clouds” that could make some decisions on their own.

In the article “The well-connected kitchen” by Jennifer Weeks, General Electric (GE) industrial designer Lou Lenzi believes digital communications and sensors will dramatically alter many aspects of how the home kitchen looks and works, from all-in-one ovens with options for microwave, convection and thermal baking, to sensors that tell home cooks if food has been stored properly.

In late 2013 GE unveiled Home 2025, a set of scenarios that project how technological advances may alter home life by the mid- 2020s, developed by analyzing the evolving lifestyles and priorities of the largest U.S. demographic groups: baby boomers and millennials.

“We thought about trends like multigenerational households where aging parents move back in with their children, and about what each of these groups will need over time,” says Lenzi. “Instead of just talking about technology, we focused on people.”

Lenzi predicts kitchens will be getting smaller because consumers will be more urbanized and more concerned about the environment in the next decade. “Designers increasingly are focusing on smaller, high-density high rises, multigenerational residences, and bungalow-sized ‘empty-nests,’ with units as small as 250 to 400 square feet,” he says. “We set out to design a complete, fully functional kitchen that would take up no more than 5% of total living space in those units,” which translates to roughly 12 to 18 square feet.

“We think the evolution of connectivity and sensor-based homes will unlock a whole new level of usability,” Lenzi says. “Refrigerators in GE’s kitchen of 2025 have “flex-temp” shelving systems that can cool foods on each shelf to the appropriate temperature. And a heater called a Fresh and Serve can be programmed to cook meals for family members (for example, an elderly parent) to eat hours later, keeping the food hot and fresh until serving time.

To read these and other stories in the Kitchen of the Future series, please visit www.futurefood2050.com.