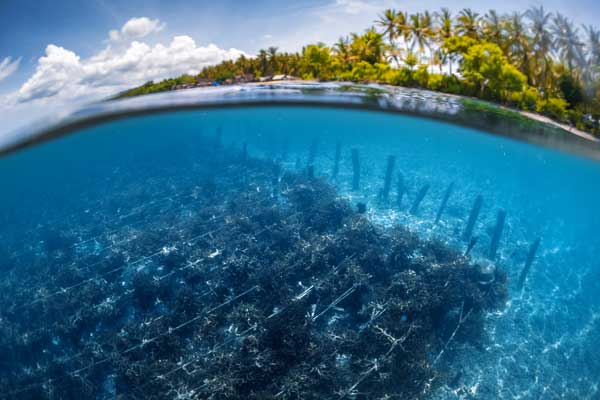 Even with all the hoopla surrounding plant-based foods and diets and the growing research of new plant-based proteins, one edible “plant” may still be under the radar … maybe partly because it’s underwater. Seaweed (sometimes called sea vegetables) is technically not a plant but the red, green, and brown marine algae (kelp) do use photosynthesis to create their own food.

Seaweeds are good sources of soluble fiber and contain essential micronutrients, including vitamins A, C, E, and K; calcium; folate; iodine; iron; magnesium; niacin, and omega-3 fatty acids. Moreover, some varieties have a significant protein content. A review study, “Bioactive Peptides Derived from Seaweed Protein and Their Health Benefits,” published in January 2018 in the Journal of Food Science explores recent research and scientific knowledge in seaweed protein-derived peptides with an emphasis on potential health impacts in prevention of hypertension, diabetes, and oxidative stress.

Along with its nutritional benefits, seaweed is highly sustainable since it does not require any land, water or nutritional inputs. It grows quickly, flourishes in the winter and can be harvested in the spring, providing a potential source of income for fishermen during their slower work months.

While seaweeds have been a staple of Asian cuisines for thousands of years and have been part of the diets of coastal communities in Europe and North America for centuries, they have recently begun to appear in snacks, noodles, and other food and drinks. Furthermore, researchers are exploring new uses for seaweed in animal feed, edible packaging and even pesticides.

Seaweed-Enriched Feed
Incorporating a relatively small amount of seaweed into cows’ feed has the potential to reduce their noxious methane gas emissions, according to research from the University of California, Davis. The study, conducted this past spring, was a small one—it involved just 12 Holstein cows—but the results were surprising and encouraging, reports animal science professor Ermias Kebreab.

Edible Packaging
Evoware, an Indonesian-based start-up, is using seaweed to produce packaging that’s edible, biodegradable, and customizable. David Christian, cofounder of Evoware, says the goal is to completely “replace conventional plastic. Currently, our seaweed-based edible packaging is water soluble and can hold only dry and solid products. But we will develop our packaging so that it can hold liquid and semi-solid product and—hopefully in the future—we can make it into rigid packaging too.” For now, the company is focused on scaling up to meet what Christian says is more orders than they can currently accommodate. This is in part thanks to several awards the company has received, including the Circular Design Challenge Award, which came with $100,000. Evoware plans to use the funds to expand capacity at its manufacturing facility, which Christian says will enable it to produce at a larger scale in the near future.

Sticky Pesticides
A 27-year-old Massachusetts Institute of Technology (MIT) graduate student has developed an innovative agricultural spray that has the potential to dramatically increase the effectiveness of pesticides on a broad range of crops.

Maher Damak, a PhD candidate in the MIT Dept. of Mechanical Engineering, created a biodegradable additive made up of electrically charged polymers derived from brown seaweed and crustaceans. When the additive is mixed with existing pesticides, the resulting spray adheres to plants far better than traditionally formulated pesticides. That’s because most plants are hydrophobic (water-repellant), which means that when they are sprayed with pesticides, only about 2% of the chemicals stick to the target. The other 98% rolls off, creating an environmental contaminant and an economic burden for farmers.

“This method can theoretically work on any crop,” Damak reports. “For our initial testing, we are working with citrus trees and grapevines,” he continues. “We are also targeting vegetables, rice, and wheat for the next stages of testing.”

IFTNEXT is made possible through the generous support of Ingredion, IFT’s Platinum Sponsor.

A review of recent progress in improving the bioavailability of nutraceutical‐loaded emulsions after oral intake August 1, 2022