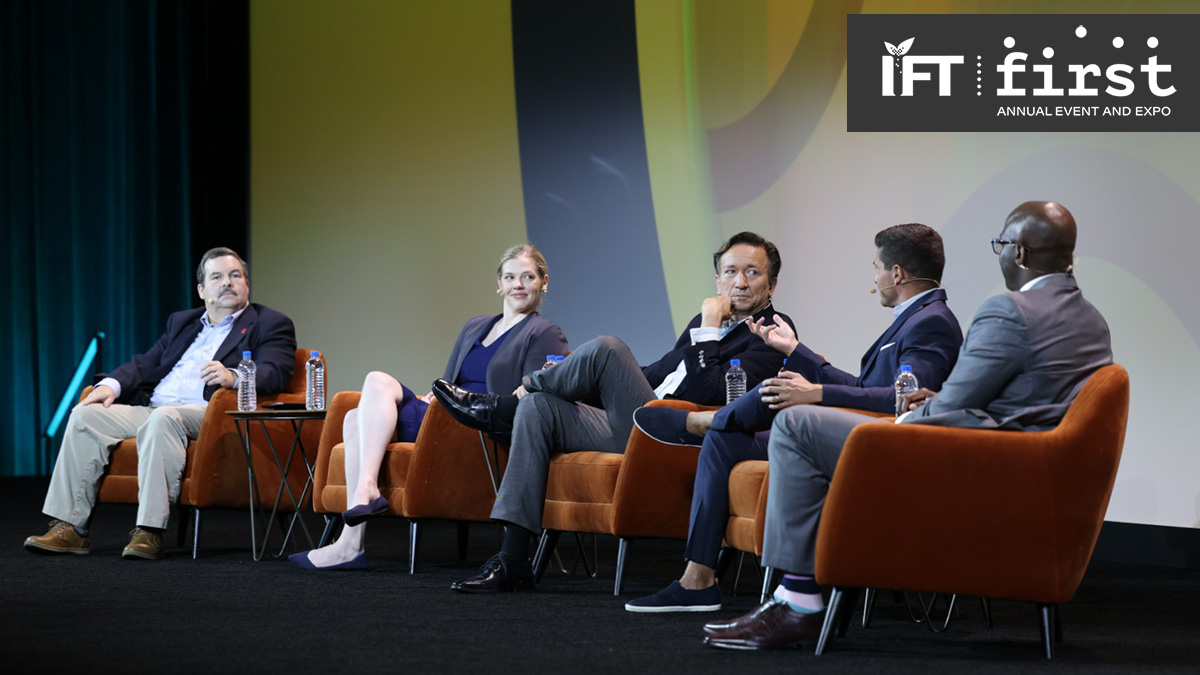 New technologies make it possible to create poultry, beef, and seafood from the stem cells of a chicken, cow, and shrimp, respectively. And producing foods from stem cells eliminates the animal welfare and environmental concerns associated with conventionally produced meat, poultry, and seafood.

However, if consumers choose not to purchase or eat these cell-based foods, the technology doesn’t mean much. In the Tuesday featured session, “Consumer Acceptance as Barrier and Opportunity for Novel Food Technology,” a group of experts with diverse backgrounds discussed the issues that must be considered to help earn consumer trust and buy-in for new products developed through food technology.

For example, morality is an important, but often overlooked, aspect of consumer acceptance, says Sydney Scott, assistant professor of marketing at Washington University in St. Louis, who has completed extensive research in moral psychology. “Research shows that people have a very deeply held belief that ‘natural’ is morally better; even if something natural is chemically identical to something genetically modified, people prefer the natural,” Scott says. “Because people think it’s wrong to tamper with the natural way of doing things, food companies have to recognize that consumer acceptance is a moral issue. We need to have a moral conversation and talk about moral responsibility and consequences.”

For example, rather than focusing on how cell-cultivated foods are genetically identical to their natural counterparts, it may be more important for consumers to learn how these products avoid the harmful environmental, labor, and animal treatment practices of conventional meat production. “Most people agree that, morally, we shouldn’t hurt people and we shouldn’t hurt animals,” Scott says. “So that could be a helpful moral conversation to have.”

In addition to tackling the moral objections many consumers may instinctively have toward genetically engineered foods, companies are faced with shaping consumer perceptions about a product they’ve never seen before, says Andrew Noyes, head of global communications and public affairs at GOOD Meat, which is now serving cell-based chicken in Singapore everywhere from fine dining to street vendors to takeout.

“We want to give consumers varied experiences, and we have been very deliberate about how we’ve introduced GOOD Meat,” Noyes says. “We have to do our part to educate consumers about these new products, but food is cultural, emotional, and experiential. We’ve done billboards and ad blitzes, but when people taste it, tasting is believing.”

With close to 100 companies now involved in producing cell-based meat, poultry, and seafood, one of the next important steps to building consumer acceptance is to agree on nomenclature, says William Hallman, professor and chair of the Department of Human Ecology at Rutgers University, and a Distinguished Research Fellow at the Annenberg Public Policy Center of the University of Pennsylvania.

“If we could all, as an industry and as regulators, agree on a common name for these products, it would be easier to educate consumers about what they are and what they’re not, which will have a big impact on consumer acceptance,” Hallman says. “We need nomenclature that will work for meat, poultry, and seafood, and can be used across global markets that will be truthful and will not confuse consumers.”

A column describing three new products with a holiday theme.

A report on three new products hitting the market.

A look at research done by a University of Copenhagen doctoral candidate on using fermentation as a tool for formulating between vegan cheese.

This column details how the process and ingredients involved in making ice cream contribute in equal measure to the frozen treat’s creamy, smooth texture and consumer appeal.