For generations, popcorn has ruled as the king of fresh-made snacks. It certainly has roots far deeper in American culture than hot dogs or apple pie. In fact, English settlers who arrived on the Mayflower were introduced to popcorn at the first Thanksgiving Feast at Plymouth, Mass. 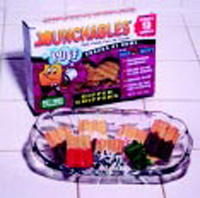 Today, no movie theater experience would be complete without a bucket of hot, fresh popcorn. The same is true at home. Americans consume 63 quarts per man, woman, and child each year, according to the Popcorn Board. Approximately 70% of that is purchased at retail stores in both raw and popped form, and eaten at home.

What makes popcorn special is not so much the quantity consumed, or its lengthy history. It’s this: popcorn is the only snack food that Americans primarily make from scratch. Home hot-air poppers, stovetop poppers, and a wide variety of industrial-strength foodservice poppers are an integral part of the American cultural scene. For more than 300 years, popcorn alone has maintained this status.

Now, for the first time, a serious competitor is poised to challenge the king. “Third-generation” snacks, sometimes referred to as semi or half products, are a hit in Europe and about to hit the American market. These snacks are the product of new twin-screw extrusion technology, innovative food formulations, and new appliance technology for both home and foodservice.

Here’s how it works. Following extrusion cooking and forming, third-generation snack pellets are dried, reaching their final texture. The pellets are packaged at this point and distributed. At home or in the movie theater, the pellets are popped in hot oil or puffed in a hot-air stream, according to extruder manufacturer Wenger Manufacturing, Inc., Sabetha, Kan. While Europeans generally like the hot oil variety, most development work in the U.S. is aimed at the healthier hot-air style.

When puffed, the products can be salted and flavored, or dipped. Puffed breakfast cereals also are possible.

Several different raw materials may be mixed together to make a suitable recipe for third-generation snacks, according to Wenger. This includes functional formulations that focus on health and nutrition. A typical recipe for snack pellets might include 55% modified cornstarch, 28% modified wheat starch, 16% tapioca starch, and 1% emulsifier. Generally, levels of 60% or less of total starch in the recipe will give only slight expansion and will yield a final product with a hard and crunchy texture after frying or popping. An example of this would be mainly whole ground corn such as a corn chip snack. Conversely, as the total starch level exceeds 60%, the final product will expand more, resulting in a light, “frothy” texture, the company claims.

This versatility gives third-generation snacks an edge over popcorn, as does the ability to create an unlimited variety of shapes, while the need for specialized popping equipment and the more general challenge of introducing the concept to consumers represent considerable challenges.

Taking on this challenge is entrepreneur Jon Tedesco, founder of Munchables, Inc., Corona, Calif. (www.munchables.com). His company has developed a complete “Snack Factory” concept that includes packaged snack pellets and a patented convection-type food preparation system. The concept was hatched five years ago and will be formally launched later this year to coincide with the Christmas/New Year holiday season.

“Third-generation snacks have really never caught on in the U.S. yet,” Tedesco said, “but the manufacturers who have worked with us are anxious to see what happens. We may have found the best way to market lots of third-generation product.”

While he didn’t specify the details of the Munchables marketing plan, the initial thrust will aim at retail consumers. An extensive infomercial is featured on the company’s Web site and may later appear on television, in which the system is demonstrated. The company also is in the process of lining up regional distributors. It hopes to sell the system once, and then perpetuate sales of snack foods via direct and retail sales. “We’re not going to charge a lot for the appliance. Our goal is to get a lot of appliances into kitchens and then stress food sales,” Tedesco said.

Pending the results of the retail launch, Tedesco has plans to move into the foodservice arena where he envisions Munchables being popped right next to the popcorn.

Partnering with Munchables is Tsann Kuen Enterprise Co., Ltd., of Taiwan, the same OEM appliance manufacturer that builds the hot-selling George Foreman Grill. “When they saw our crude prototype a few years ago, they got real excited, so they threw their hat in the ring and helped us develop what is now our finished home unit,” Tedesco said.

By this time next year, third-generation snacks may be on their way to carving out a slice of the $60 billion U.S. snack food market. At that point, Tedesco’s success may also be his biggest challenge, as competition from major snack food marketers will be fierce and formidable.

No one seems to know exactly where the term third-generation came from. Tedesco has been trying to find out for more than five years, with no success. “There’s no consensus around the world, no one agrees on where it actually got started,” he said.

At this point, no one exactly knows where it’s headed, either.