Fruits and vegetables are processed in a wide range of ways, from little or no processing except cleaning and cooling to high-temperature retorting in metal, glass, and plastic containers. The products, starting with the same raw material, can vary widely in flavor, color, and texture. Asparagus, peas, and peaches are good examples of foods available in several fresh and processed forms, which are recognizable but clearly different from each other. Depending on people’s preferences, each product has a distinct market segment. One does not usually convert from liking frozen peas to liking canned peas, but each form has its following. Processing developments maintain the fundamentals, but seek to reduce costs and improve quality. 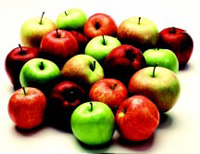 An alternative to processing and packaging to preserve fresh fruits and vegetables is a mild chemical treatment that retards ripening and retains harvest quality by interfering with the action of ethylene, a plant hormone which stimulates the ripening process. Ethylene has been used for years to bring bananas to market at the peak of flavor. The bananas are harvested while green and easy to ship, then ripened in special rooms where they are exposed to ethylene. Some produce, such as apples, give off ethylene which can affect other crops stored nearby.

Adel Kader (phone 530-752-0909), Professor of Pomology at the University of California-Davis, said that the ethylene-inhibiting chemical, 1-methylcyclo-propene (MCP), was discovered by Edward C. Sisler of North Carolina State University during research on ethylene receptors in plants. It turns out that other olefins besides ethylene bind to the suspected receptor sites and block the action of ethylene. Strained olefins, such as MCP are most effective in the sense that their action persists longest. Eventually, the effect wears off, but not for days.

MCP has been found to be most effective and commercially practical. The technology was licensed for use on flowers and plants to Floralife, Inc., Walterboro, S.C., by North Carolina State University. Use on foods has not yet been allowed in the United States, but a petition is pending with the Environmental Protection Agency.

The rights to apply the technology on foods throughout the world and flowers in countries other than the U.S. and Canada belong to a subsidiary of Rohm and Haas Co. called AgroFresh, Inc., Philadelphia, Pa. Shari Samuels (215-619-5622), Communications Manager, said that the firm has received registration for food and flowers in Chile, Argentina, and New Zealand and has submitted applications in other parts of the world.

The active ingredient is released when a carrier sugar (cyclodextrin) is wet with water in an automated generator. It only takes about 1 part per million in the atmosphere to have the desired effect. Each crop responds differently, depending on what the normal effect of ethylene usually is. For instance, ethylene causes color changes in some crops and softening or flavor changes in others.

Research activity in the field is intense, mostly in horticultural departments. Because MCP has not yet been approved for food use, research has focused not on flavor but on other sensory attributes, such as titratable acidity and firmness, surface appearance, and other evidence of ripening.

Food crops that have been examined, according to abstracts from a recent American Society for Horticultural Science conference, include papaya, apples, tomatoes, cucumber, avocado, peach, nectarine,honeydew, Fuji apples, and cranberries. Typical variables are concentration applied, ranging from 0.25 to 10 ppm, with 1 ppm often being most effective, and temperature, ranging from near freezing to ambient.

The treatment also prolongs the shelf life of fresh-cut fruit, as judged by appearance. However, the effect on taste needs to be determined.

It appears that tomatoes might be stored for up to 30 days in a fully ripe condition. That could translate into higher-quality processed products as well as a longer season for vine-ripened produce.

Currently, MCP is registered with EPA as a biopesticide used to extend the life of cut flowers and potted plants. It is typically applied in enclosed spaces such as greenhouses and truck bodies. It is not considered toxic, nor is it an environmental hazard. However, it must be used with care, as the dry powder can cause eye irritation. MCP itself is not an irritant.

Rohm and Haas provides a material safety data sheet for EthylBloc, its trade name for the compound as used on flowers and plants. For fruits and vegetables, it is called SmartFresh. This data sheet states that it is not toxic, flammable, or otherwise dangerous.

Since its effect seems to wear off with time, one might conclude that there would not normally be any residue in foods treated with MCP after a period of storage. This would be valuable to manufacturers that make label claims about low pesticide residues.

If it is effective on tropical fruits, which often ripen very quickly and so are rarely shipped very far, new markets might be open for Caribbean and other tropical nations that have few cash crops. For instance, mangos are plentiful for a brief time in Haiti but are not exported and are not usually processed, so many go to waste while people there are hungry and poor.

MCP appears to behave synergistically with controlled-atmosphere storage and temperature, allowing lower storage temperatures for avocado and bananas, which otherwise would discolor.

It is not clear what happens to the flavor of various commodities upon extended storage. Likewise, the benefits of application to crops other than apples must be determined. As soon as EPA permits food use of the chemical, one can assume there will be a flood of research in this area.

Another theme in fruit and vegetable processing is the rejuvenation of older technologies, according to Barry Swanson (509-335-3793), Professor of Food Science at Washington State University, Pullman. For example, high-quality fruit is offered in refrigerated glass containers, imitating the look of home-canned products. It is not clear whether the foods must be refrigerated because they only receive a mild heat treatment, or whether they really are shelf stable but are marketed refrigerated as part of a quality image.

Another example is shelf-stable foods in retort pouches and cans. Currently, pouches are used for tuna and pet foods, but it is likely that other products will appear. Meanwhile, old and familiar canned foods such as flavored chopped tomatoes and flavored refried beans are being repositioned as ingredients for cooking, and canned vegetables for use in salads.

Ray Folwell (509-335-5556), Professor of Agricultural Economics at Washington State University, and his researcher Trent Ball are active in assisting the local asparagus industry to automate in the face of high labor costs and competition from overseas. Oraka of New Zealand has provided automated grading and sorting equipment for asparagus producers, which reduces labor costs by 20-30%. Mechanical harvesting also reduces labor. Both hydrocooling and warm water baths are being tested to extend fresh asparagus shelf life.

More-exotic topics in processing fruits and vegetables include high-pressure preservation and biosensors. High-pressure equipment is commercially available from Flow International Corp., Kent, Wash. According to Errol Raghubeer (253-813-2747), Flow International’s Vice President of Microbiology and Food Technology, there are commercial units operating in the U.S. on oysters, meat, and apple juice. Guacamole is probably the greatest success for high-hydrostatic processing, since avocado darkens so quickly upon exposure to air or heating. It is processed in Mexico and distributed refrigerated. Salsa is another promising product, since “fresh” salsa has proven so popular in comparison to more highly processed shelf-stable, hot-filled salsa.

High pressure extends shelf life but still requires refrigeration, since it does not inactivate spores. Flow International believes it has supplied about 95% of the high-pressure units in the food industry worldwide. A unit in England processes smoothies and orange juice, one in Portugal treats apple juice, and another operates in Italy.

High-pressure units for solids are operated in batch mode, while liquids are processed semi-continuously in a four-vessel system. Several large food companies are nearing completion of research projects on other applications of the technique.

To achieve shelf-stable foods, high pressure must be combined with a mild heat treatment. Research sponsored by an industrial consortium at the National Center for Food Safety and Technology, Summit–Argo, Ill., is addressing this opportunity. The issues affecting validation of high-pressure processes were discussed in the February 2002 issue of Food Technology.

Biosensors are more of an academic interest at present, as researchers attempt to miniaturize detectors for enzymes and microbes to provide near-real-time detection and permit control of blanching and sterilization processes. Swanson points out that miniaturization can go too far in the sense that the detection devices will only be sensing point values. It is well known that foods are highly variable in properties, including microbial load, and that indicator enzymes may also have spatially variable concentrations. Thus, what is really needed is more of an averaging detector or perhaps an array that gives a number of readings.

While not focused exclusively on fruits and vegetables, the relatively new Center for Advanced Processing and Packaging (CAPP), sponsored by the National Science Foundation at three universities (UC–Davis, North Carolina State, and Ohio State), will be studying processes that could apply to fruits and vegetables, according to Diane Barrett (530-752-4800), Extension Specialist at UC–Davis. Among the processes are high pressure, ohmic heating, pulsed electric fields, microwave, and ultraviolet. Barrett, for instance, is looking at the effects of these processes on enzymes in apple juice and other products. Many show an effect against pathogens but not against enzymes, so they must be supplemented with mild heating.

Another pioneering approach to preserving fresh-cut fruits and vegetables is irradiation. Anuradha (Anu) Prakash (714-744-7826), Associate Professor at Chapman University, Orange, Calif., is studying the effect of irradiation on a variety of cut vegetables of interest to the foodservice industry, such as green onions, cilantro, celery, and diced tomatoes. She finds that 1 kiloGray of radiation gives a six-log reduction in Escherichia coli O157:H7 inoculated samples and leads to a shelf life longer by several days than that provided by other treatments. Irradiation-induced loss of firmness has been observed, and Chapman University researchers are working to minimize such effects. Irradiation of whole fruits and vegetables has not been successful, she said, because many products have a low tolerance to radiation and develop skin damage and internal browning; however fresh-cut products do not exhibit these reactions. Pathogens such as E. coli and Shigella have been found on some samples of imported produce. IBA/Sterigenics, Tustin, Calif., a commercial irradiator, has been cooperating with Chapman University on this research.

PRODUCTS & LITERATURE
Fluid-bed Drying System recycles up to 75% of heated exhaust air to cut heating costs by up to 30% during continuous drying of bread crumbs, sesame seeds, rice, and other products that require processing at temperatures above 150ºF. Recycling air through a continuous pulse-jet dust collector mounted above the dryer and reheating it through a natural-gas burner permits the process to operate at a high outlet moisture content while staying above the dew point of the final exhaust air. For more information, contact Witte Co., Inc., 507 Rt. 31 S., Washington, NJ 07882 (phone 908-689-6500, fax 908-537-6806, www.witte.com).

Sanitary Fluid Handling Products include plate heat exchangers, scraped-surface heat exchangers, pumps, valves, and fittings previously sold under the Alfa Laval and Tri-Clover brand names are described on a CD. The new consolidated line of fluid-handling products results from the consolidation of Alfa Laval and Tri-Clover in December 2000. For a copy of the CD, which presents sales and technical information for the products, contact Stephanie Jarstad at Alfa Laval Inc., P.O. Box 581909, Pleasant Prairie, WI 53188 (phone 262 947-3713, e-mail [email protected]).