On January 18, 2001, the Food and Drug Administration published a “Premarket Notice Concerning Bioengineered Foods”(FDA, 2001a), a proposed set of guidelines for establishing the safety of biotechnology-derived food crops. The new policy is designed to supplement FDA’s earlier “Statement of Policy: Foods Derived from New Plant Varieties” (FDA, 1992) and address new issues that have arisen since its publication a decade ago. Interestingly, neither of these two rules specifically addresses risk assessment of bioengineered microorganisms, even though they were the first organisms to be used in food biotechnology.

While some of the issues addressed in this article are applicable to any bioengineered organism—e.g., plants, animals, or microorganisms that have undergone genome manipulation through recombinant DNA technology—the intent here is to address issues specific to bioengineered microorganisms. 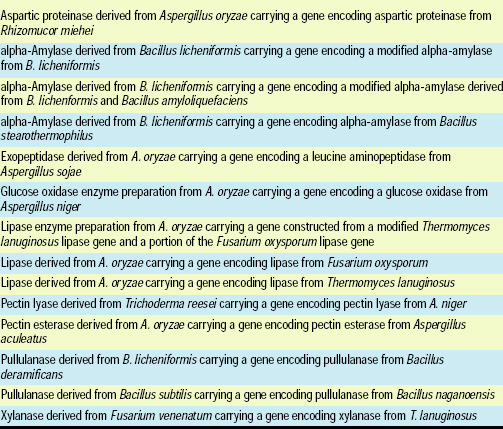 Bioengineered microorganisms have been increasingly used for the production of food processing aids and ingredients (Table 1), yet their potential in food production is only beginning to be realized. Companies will undoubtedly apply this technology for the genetic engineering of probiotics—live cultures intended for consumption as food or in food. FDA has no specific regulations for this type of added ingredient other than as a food additive or as a Generally Recognized as Safe (GRAS) substance. If the latter route is selected, then the decision to notify FDA of the GRAS determination prior to marketing these products is voluntary.

Clearly, the specific safety tests will be dependent on what the final food ingredient product is to be—a purified protein, other molecule, or whole bioengineered microorganism. 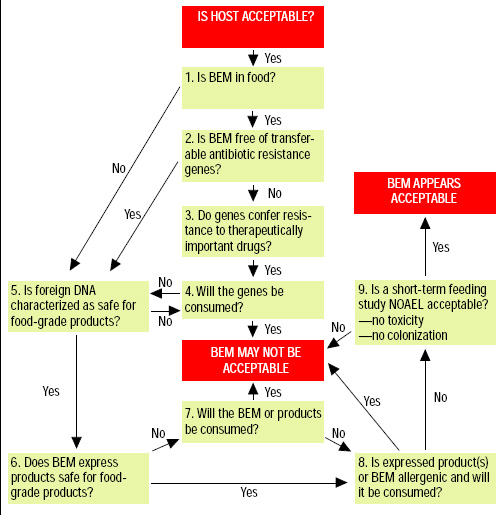 Characterization of the Microorganisms
Recipient microorganisms should not be, before or after genetic modification, pathogenic (producing disease under ordinary circumstances), toxigenic (producing injurious substances at levels that are detectable or demonstrably harmful under ordinary circumstances), or allergenic (having the capacity to induce allergy). Presently, there are no GRAS notifications for microorganisms, but several strains are available with a documented safe history of use as a food or food component. A list of microorganisms and microbe-derived ingredients used in foods can be found on the FDA Web site (FDA, 2001b); this is not an exhaustive list, and there are other examples of microorganisms with a safe history of food use.

However, if a new or uncharacterized host microorganism is to be used, then the risk assessment must consider the possible pathogenicity/toxicity/allergenicity of not only the host, but also its relatives. An evaluation will need to be done of the possible effects from bioengineering on a microorganism’s endogenous gene expression. Genome changes can increase expression of toxicant-encoding genes, as well as alter the expression of genes encoding enzymes that regulate the levels of various biomolecules and their metabolites. In addition, there is a potential for activation of “silent genes,” genes embedded within the genome that do not normally express a detectable product. Thus, the products or changes from any activated silent genes will need to be determined. The level of importance in a risk assessment from any of these potential changes will be influenced by how much of the bioengineered microorganism will be ultimately consumed and the purity of the final product.

The expression of a toxicant or allergen by a microorganism does not necessarily disqualify its use as a host, if it can be demonstrated that the final purified food ingredient does not contain the toxicant or allergen. It may also be possible to establish safety if the intended use will result in negligible levels of toxicant consumption, although this is a much more complicated risk assessment and will require establishing a No Observed Adverse Effect Level (NOAEL) for the toxicant. Establishing a NOAEL for allergen-tainted food ingredients and allergen-expressing probiotics is unlikely, given the current regulatory concerns regarding allergen thresholds. In addition, probiotics derived from a known pathogenic host will most certainly be deemed unacceptable.

Characterization of the Modification
Overriding safety concerns for genetic modifications include genetic stability and phenotypic predictability. Of primary concern is that genes should not escape into the environment; i.e., not undergo horizontal gene transfer to the consumer or other organisms. To this end, one should avoid or minimize the inclusion of superfluous transgenes or sequences and superfluous expression of transgenes. Sequences that should be avoided include (1) transposons that stimulate the unanticipated integration of foreign DNA into other genomes and (2) antimicrobial resistance determinants/antibiotic resistance genes that if transferred to wild-type or naturally occurring bacteria would provide a selective advantage to these bacteria.

Genetic stability can be enhanced by chromosomal integration of genetic material rather than transformation of a host microorganism with a plasmid. Obviously, all genetic material should be characterized, with a description of its construction and source provided, and should not contain genes coding for virulence factors, protein toxins, or enzymes that may be involved in the synthesis of mycotoxins or any other toxic or undesirable substances.

GI microflora can interfere with various functions, such as intestinal motility, microbe-assisted digestion, development of gut-associated immune system, and prokaryotic-eukaryotic cross-talk at the cellular level. Thus, a risk assessment for live bioengineered microorganisms and/or probiotics (even non-bioengineered probiotics) should consider persistence or colonization of the new microorganism in the human GI tract and the possible effects on the endogenous GI microflora and human health. This can be accomplished through additional testing during subchronic feeding studies. Such tests might include monitoring for the presence of bioengineered microorganism–specific DNA in the feces as a measure of intestinal colonization, as well as additional monitoring of animal nutritional status.

Allergenicity
More than 90% of food allergies in the U.S. are caused by cow milk, eggs, fish and shellfish, tree nuts, wheat, and legumes, especially peanuts and soybeans. Clearly, any transgene should not contain genetic material from known allergen-encoding genes. Nevertheless, a sequence homology search will need to be performed for comparison of any new bioengineered-microorganism expression products with any known allergens. A positive match has been defined as six or more contiguous amino acids or more than 35% overall amino acid homology to a known allergen (JECFA, 2001).

The expression products should not be stable to heat, processing conditions, pH, and/or gastric juices. It is believed that easily denatured and/or degraded proteins are less allergenic. If the expressed proteins are stable and/or homologous to known allergens, then additional testing, such as screening against serum and/or skin-prick testing in allergen-sensitized humans, may be necessary.

A Promising Future
The risk assessment of food ingredients and processing aids derived from bioengineered-microorganisms is now a well-established process based on precedence established by more than ten years of successful experience. Purified chymosin used in cheese manufacturing was the first to be approved, and numerous other bioengineered microorganism–derived enzymes, food ingredients, and nutrients have since been added to this list. The safety of these food ingredients and processing aids has been central to their consumer acceptance into the food chain.

Rigorous scientific assessment of bioengineered-microorganism food safety is essential to maintain this acceptability as we venture into the future with bioengineered probiotics. It is difficult to predict what new risk-assessment challenges will arise, but as discussed here, several key issues will always need to be addressed. If history is any guide, then the future and safety look promising for this exciting new technology.

FDA. 2001b. Partial list of microorganisms and microbial-derived ingredients that are used in foods. Food and Drug Admin., Center for Food Safety & Applied Nutrition, Office of Food Additive Safety. www.cfsan.fda.gov/~dms/opa-micr.html, May 16.

FDA. 2001c. Draft guidance for industry: Voluntary labeling indicating whether foods have or have not been developed using bioengineering. Food and Drug Admin., Fed. Reg. 66: 4839-4842.