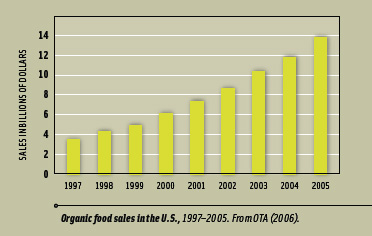 The organic foods industry in the United States has grown dramatically in the past two decades. Organic foods constitute more than 2% of all food in the U.S., and organic sales are estimated to have increased by nearly 20% annually since 1990, reaching $13.8 billion in 2005 (OTA, 2006). 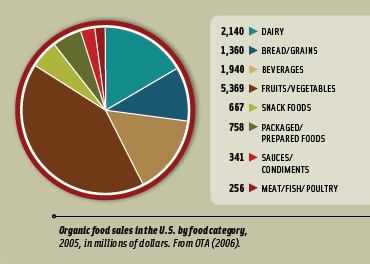 This rapid growth may be traced to increased consumer confidence in organic foods as well as to concern about possible health risks and environmental impacts of conventional food production methods. Surveys frequently indicate that consumers purchase organic foods because of a perception that organic foods are healthier; one recent survey (WFM, 2005) reported that the main reasons consumers purchased organic foods were for the avoidance of pesticides (70%), for freshness (68%), and for health and nutritional benefits (67%).

This article is a synopsis of the Institute of Food Technologists’ latest Scientific Status Summary entitled “Organic Foods” that comprehensively compares organic and conventional foods with respect to pesticide residues, nutritional components, naturally occurring toxins, and microbiological safety. The full text of the peer-reviewed Scientific Status Summary by Carl K.Winter and Sarah F. Davis is being published in the November/December 2006 issue of Journal of Food Science, which will be available online at www.ift.org in mid-November.

Legislation and Regulation
The U.S. Dept. of Agriculture introduced the Organic Foods Production Act (OFPA) of 1990 as part of the Farm Bill. The OFPA called for the establishment of the National Organic Standards Board (NOSB) to make recommendations to the National Organic Program(www.ams.usda.gov/nop) about whether a substance should be allowed in organic production or handling, to assist in the development of standards for substances to be used in organic production, and to advise the Secretary of Agriculture on other aspects of the OFPA. The members of NOSB are appointed by the Secretary of Agriculture and represent all aspects of the organic food spectrum.

The National Organic Program Standards were fully implemented in 2002. They specified the methods, practices, and substances that could be used to produce, process, and handle organic foods, as well as certification procedures and penalties for falsely labeling products as organic.

Organic production can be defined as an ecological production management system that promotes and enhances biodiversity, biological cycles, and soil biological activity. It is based on minimal use of off-farm inputs and on management practices that restore, maintain, and enhance ecological harmony. U.S. regulations require that organic foods be grown without synthetic pesticides, growth hormones, antibiotics, or genetic engineering.

Organic farming utilizes various methods to enhance or maintain soil fertility, such as crop rotation, tillage and cultivation practices, cover crops, and natural products. The use of synthetic materials is not allowed in organic farming unless the materials are on the National List of Allowed and Prohibited Substances. Organic farmers use animal and crop wastes; botanical, biological, or non-synthetic pest controls; or allowed synthetic materials that can be broken down quickly by oxygen and sunlight.

The European Commission recently adopted a proposal for new regulations on organic production. The new rules, which go into effect on January 1, 2007, are meant to be easier for both producers and consumers to understand and will be slightly flexible for the different regions in the European Union. Organic products in the EU must contain at least 95% organic ingredients. Imported organic products must comply with EU standards, or the country of origin must have equivalent guarantees; the U.S. also accepts products from countries that have equivalent guarantees, such as the EU.

Pesticide Residues
According to a recent survey, 70% of consumers said that they purchased organic foods to avoid pesticides (WFM, 2005). Clearly, one of the drivers of the organic food industry is the differentiation between organic foods and conventional foods with respect to pesticide use and perceived residues in food.

Synthetic substances can be used in organic production as long as they are listed on the National List of Allowed and Prohibited Substances. The list includes several synthetic substances allowed for use on organic crop production, such as soap-based herbicides, water disinfectants, and insecticides such as boric acid, lime sulfur, elemental sulfur, copper sulfate, oils, and pheromones. Among the synthetic materials approved for organic plant disease management are copper sulfate, elemental and lime sulfur, and oils.

The most comprehensive study of the relationship between pesticide residues in conventional foods and those in organic foods was conducted by Baker et al. (2002). This study utilized three distinct pesticide residue databases: USDA’s Pesticide Data Program (PDP), the Marketplace Surveillance Program of the California Dept. of Pesticide Regulation (CDPR), and a Consumers Union (CU) private residue testing program.

Pesticide residues were 3.2 times more likely to be found in conventional produce than in organic produce according to the PDP data, 4.8 times more prevalent in the CDPR data, 2.9 times greater in the CU study, and 4.1 times more likely in another study using Belgian data (Pussemier et al., 2006). The levels of pesticide residues in organic foods also appear to be lower than those in conventional foods. An analysis of PDP data showed that in cases where organic and conventional samples contained the same pesticide residue on the same commodity, residues in the organic samples were lower 68%of the time (Baker et al., 2002).

Some of the residues encountered in the PDP monitoring represented environmentally persistent chlorinated hydrocarbon insecticides that have been banned for use for several decades but are still present in small amounts in many agricultural fields and can result in residues in food. By omitting the detections of such banned pesticides, the percentage of organic foods showing residues dropped from 23% to 13%, while the percentage of foods making no market claim dropped from 73% to 71% (Baker et al., 2002).

The Food and Drug Administration annually conducts its own market basket survey known as the Total Diet Study, which involves a market basket of 285 distinct foods analyzed for pesticide residues at the time the foods are ready for consumption. While the results of the Total Diet Study have consistently shown low levels of pesticide residues in the food samples, FDA discontinued estimating dietary exposure to specific pesticides after 1991.

The highest daily average pesticide intake among different populations in the 1991 Total Diet Study was compared directly with the United Nations Food and Agriculture Organization/World Health Organization’s Acceptable Daily Intake (ADI) values for 38 pesticides (FDA, 1992). Estimated exposures were less than 1% of the ADI for 34 of the pesticides, with the remaining four pesticides contributing 1%, 1.8%, 2.7%, and 4.8% of the ADI. To put this into perspective, the ADI typically represents a value 100 times lower than the highest level of exposure to a pesticide given to the most sensitive animal species on a daily basis throughout the animal’s lifetime that has not caused any noticeable toxicological effect. A typical human exposure at 1% of the ADI represents an exposure 10,000 times lower than levels that do not cause toxicity in animals.

Occupational exposure to pesticides presents a much greater health risk than consumer exposure to pesticides. In California in 2004, 828 documented cases of occupational pesticide illnesses were reported (CDPR, 2005). Organic production should also result in much less environmental impact than conventional production using pesticides. Pesticides are frequently detected in water and air samples and may potentially affect non-target organisms such as birds, mammals, and fish.

Nutrients and Toxins
While many consumers consider organic foods to be more nutritious than conventional foods, this claim is difficult to support, based on available scientific data. Most comprehensive reviews comparing nutrient levels in organic and conventional foods have been inconclusive, yielding mixed results, with the exception of nitrate levels, which are typically lower in organic foods (Woese et al., 1997; Worthington, 2001; Bourn and Prescott, 2002).

Many recent studies, however, have demonstrated that some plant secondary metabolites such as organic acids and polyphenols are produced at greater levels under organic growing conditions. Polyphenols are considered to have potential human health benefits as antioxidants. Two major hypotheses exist to explain the increases in polyphenols in organically produced foods.

One hypothesis considers the impacts of different fertilization practices on plant metabolism. In conventional agriculture, synthetic fertilizers frequently make nitrogen more available for the plants than organic fertilizers do and may accelerate plant growth and development. Plant resources are therefore allocated for growth purposes, resulting in a decrease in the production of plant secondary metabolites such as organic acids, polyphenolics, chlorophyll, and amino acids.

The second hypothesis considers the responses of plants to stressful environments such as attacks from insects, weeds, and plant pathogens. Organic production methods, which are limited in the use of insecticides, herbicides, and fungicides to control plant pests, may put greater stresses on the plants and require the plants to devote greater resources toward the synthesis of their own chemical defense mechanisms.

Increases in antioxidants such as plant polyphenolics have been attributed to their production in plant defense (Asami et al., 2003), although the same mechanisms may result in the elevations of other plant secondary metabolites that may be of toxicological, rather than nutritional, significance. Examples of naturally occurring toxins that might be elevated in organic foods include alkaloids, glycoalkaloids, and furanocoumarins. Mycotoxins such as aflatoxins and fumonisins also have the potential to be produced at greater levels in organic foods if plants are under greater stress from plant pathogens or insects that can damage crops and provide sites for plant-pathogen colonization.

Microbiological Risks
The use of animal manures as fertilizers presents potential microbiological risks if the manure is composted improperly. Both conventional and organic agriculture use animal manure for fertilization but the practice is more widespread in organic production due to the prohibition of synthetic fertilizers. Interestingly, the national organic standards require that animal manures be composted according to specific procedures or applied more than 90 days before harvest; conventional food production does not have such requirements.

While it has been argued that the restricted use of antibiotics in organic farming may result in increased pathogen levels, research findings in this area are inconclusive. Several studies have shown that the prohibition of antibiotic use in organic animal production appears to lessen the incidence of antimicrobial-resistant bacteria (IFT, 2006).

Neither System Superior
While many studies demonstrate qualitative differences between organic and conventional foods with respect to pesticide residues and nutrients, it is premature to conclude that either food system is superior to the other. Pesticide residues, naturally occurring toxins, nitrites, and polyphenolic compounds exert their health risks or benefits on a dose-related basis, and data currently do not exist to ascertain whether the differences in the levels of such chemicals between organic foods and conventional foods are of health significance.