The following discussion is based in part on a review by Rickman et al. (2007a, b) of recent literature on the nutritional value of fresh, canned, and frozen fruits and vegetables. The review was commissioned by the Canned Food Alliance and prepared by faculty of the University of California Center for Excellence in Fruit & Vegetable Quality (see sidebar). 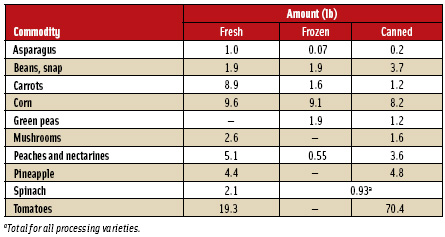 Most fruits and vegetables are composed of 70–90% water and once separated from their source of nutrients (tree, plant, or vine) undergo higher rates of respiration, resulting in moisture loss, quality and nutrient degradation, and potential microbial spoilage. In some instances, fruits and vegetables may be harvested immature to reduce mechanical damage during harvesting and transportation. Because intact fruits and vegetables are still alive and respiring, temperature and relative humidity must be carefully controlled to maintain low rates of respiration, prevent moisture loss, and maintain eating quality.

Changes in nutrient composition from harvest to consumption depend to a certain degree on the particular nutrient, the commodity, and the postharvest handling, storage, and home cooking conditions. In addition, initial nutrient content is affected by the particular cultivar (e.g., Red Delicious and Fuji apples), soil type, production system (conventional, organic, etc.), and weather conditions (temperature, humidity, daylight hours, etc.) during growth.

Fruits and vegetables for the fresh market are generally harvested by hand, with the exception of roots and tubers, while many commodities destined for processing are mechanically harvested. Mechanical harvesting generally causes more stress to the plant tissue and may result in more damage than hand harvesting. Nutrient retention is optimized if fruits and vegetables are gently handled and stored at high relative humidity and refrigerated. Some commodities, such as apples and pears, are stored for up to 12 months under controlled atmosphere conditions that utilize low oxygen and high carbon dioxide levels to slow down respiration. Most perishable commodities, however, are stored under refrigerated conditions, and storage life may range from 8–10 days for highly perishable fruits like berries to 8–10 weeks for less-perishable commodities like squash, pumpkin, apples, grapes, and pears.

Processed Fruits and Vegetables
Many fruits and vegetables only grow in specific regions of the world, in a particular type of soil, under certain temperature and humidity environments, and at limited times of year, and in many countries refrigeration is not available. Processing allows fruits and vegetables produced in remote regions of the world, such as coconuts, durian, mango, and papaya, to be stabilized and transported to distant locations for consumption. In many instances, fruits and vegetables such as pumpkin, clingstone peaches, and some leafy greens and squashes may be too tough or bitter to consume unless they undergo thermal treatment, either during home cooking or, in the case where the growing location is distant, during the canning process. Canning, freezing, dehydration, pickling, fermentation, and other methods of preservation are carried out with the goal of delivering processed products that are safe and retain desirable quality attributes similar to those of fresh products.

Freezing is typically preceded by blanching (a short-time heating step) to inactivate enzymes, and this pretreatment may result in some relatively limited loss of quality components. Frozen products should not be stored for long periods in “frost-free” home freezers, because these go through warming cycles to defrost coils and inherently warm products stored in them. Storage in warehouses where temperature is well maintained may be for up to one year.

In general, water-soluble nutrients such as vitamins C and B and the polyphenolics are degraded by processing treatments and may be leached into cooking water or the canning medium. Fat-soluble nutrients such as vitamins A and E and the carotenoids may be released from their cellular matrices by thermal, freezing, high-pressure, or other preservation treatments. Because they have been extracted to a greater degree by the treatment, it is possible to analyze them more readily, and it may appear that there is an increase. It is not likely that processing methods per se will cause a real increase in nutrient concentration, but they may make nutrients more detectable instrumentally and perhaps more available biologically. Scientists are still investigating the relationship between what may be detected in the laboratory and the “bioavailability” or amount of material that is absorbed into our bodies. In the determination of antioxidant activity, for example, a growing number of researchers are investigating antioxidant effects using human, animal, or cell-line models rather than relying merely on instrumental determination of model systems that may or not simulate what happens in the body.

Fresh vs Canned and Frozen
Vitamin C is water soluble and sensitive to heat, light, and oxygen, making it susceptible to loss during both home cooking of fresh fruits and vegetables and thermal processing. For that reason, loss of vitamin C is often used as an index of nutrient degradation.

Research indicates that as long as fresh products undergo minimal storage and are handled at proper temperatures, they are superior to processed products in terms of vitamin C content. However, vitamin C degrades rapidly after harvest, and this degradation continues during storage. Vitamin C losses in vegetables stored at 4°C for 7 days range from 15% for green peas to 77% for green beans. Refrigeration slows deterioration of vitamin C, as demonstrated in the case of broccoli, where losses after 7 days of storage were 0 at 0°C but 56% at 20°C. It should be noted, however, that 20°C storage of broccoli for 7 days is atypical and would result in a wilted, yellowed product that would in all likelihood not be consumed.

Losses of vitamin C during home cooking of fresh vegetables range from 15 to 55%, depending on the cooking method. Additional vitamin C loss due to cooking canned products is minimal, since little if any added water is needed and heating time is generally less than the cooking time needed for fresh or frozen products. Table 2 compares vitamin C content in fresh, frozen, and canned vegetables that are further stored and then home cooked.

Canning exposes fruits and vegetables to high temperatures, which degrade vitamin C and may cause leaching into the canning medium. Vitamin C decreased by 10–90% during the canning of various vegetables, but there was little change in content during storage of canned products.

Vitamin C losses during freezing were slightly lower, but were strongly influenced by the particular commodity and the blanching and freezing conditions used. Frozen fruit and vegetable products showed little change in nutrient content if the storage temperature was well maintained.

Losses in B vitamins also occur during transportation and storage of fresh fruits and vegetables, but less literature is available on these nutrients. The B vitamins, thiamin and vitamin B-6 in particular, are quite sensitive to heat and light, and reported losses as a result of canning range from 7 to 70% for various vegetables. The B vitamins were also sensitive to blanching and freezing, with losses in the range of 20–60%.

The water-soluble polyphenolic compounds are found primarily in the skins of commodities such as peaches, pears, and apples. Therefore, removal of the skin will significantly change the levels of these compounds. Polyphenolics generally decline with storage of fresh fruits and vegetables and as a result of canning and blanching (Howard et al., 1999). Mineral and fiber content was found to be similar in fresh, canned, and frozen fruit and vegetable products; this is expected, since these nutrients are relatively inert and are not sensitive to degradation by thermal processes used in food preservation.

Fat-soluble nutrients such as vitamins A and E and the carotenoids (including lycopene) are sensitive to heat, light, oxygen, and pH. However, because these compounds are fat soluble, there is little leaching into cooking water or canning medium. Refrigerated storage for 14–16 days resulted in a 10% increase in the beta-carotene content of carrots and a 10% loss in green beans (Howard et al., 1999). Processed tomato products have higher lycopene content than fresh, most likely due to the heat-induced release of this nutrient from its cellular matrix (Nagarajan and Hotchkiss, 1999). Therefore, processing does not cause the synthesis of more carotenoid compounds but merely allows scientists to detect greater amounts of them due to their increased extraction. Compared to the water-soluble vitamins, the carotenoids and lycopene appear to be relatively stable during processing, storage, and cooking, but there is a lack of information on these components.

Fiber is relatively insensitive to thermal processing or freezing, so the fiber content is very similar in fresh and processed fruits and vegetables. Brassica crops, such as cabbage and broccoli, have a naturally occurring enzyme called myrosinase that produces nutritious isothiocyanate compounds. Processing destroys this enzyme, but it exists in the intestine as well, so the same nutritious compounds are produced there when cooked broccoli is eaten.

Research and Education Needs
Research shows that by the time a fruit or vegetable is consumed, fresh, frozen, and canned versions may be nutritionally similar, depending on the postharvest handling and processing treatments. However, since most studies have only evaluated changes in vitamins and perhaps total phenolics, little is known about the effects of processing on some of the more nutritionally significant compounds in fruits and vegetables. Future research should focus on specific nutrients known to be bioavailable and utilizable by the body, and on the effects of fresh storage and cooking, as well as processing, storage, and cooking.

Loss of nutrients during fresh storage may be more substantial than consumers realize, so consumers should be educated about proper storage. Fruits and vegetables should be consumed soon after harvest, or postharvest handling conditions must be controlled such that nutrient degradation does not occur. A good diet should include a variety of fruits and vegetables, whether they are fresh, frozen, canned, dried, or otherwise preserved. The Nutrition Facts label on processed products accurately reflects the nutritional content and should be consulted by consumers interested in healthy diets.

Centers Address Fruit and Vegetable Quality
California is the primary producer of fruits and vegetables in the United States, and in January 2006, the University of California established a Center for Excellence in Fruit & Vegetable Quality within the Robert Mondavi Institute of Wine & Food Science (http://robertmondaviinstitute.ucdavis.edu/).

More than 30 scientists—ranging from economists to consumer scientists, sensory scientists, molecular biologists, chemists, biochemists, postharvest physiologists, nutritionists, and process engineers—are involved in the Center, which will form an integral part of a new Foods for Health Initiative.

The long-term goal is to develop and promote science-based information and technology that increases consumption of fruits and vegetables by enhancing both eating quality and health. To accomplish this, the scientists will focus on three short- to medium-term objectives: define desirable sensory parameters that describe consumer perception of fruit and vegetable quality; correlate sensory parameters with objective measurements of quality (color, texture, flavor, and nutritional quality); and identify optimal genetic, preharvest, postharvest, and processing practices that maximize quality and nutritional value of fruits and vegetables.

Other interdisciplinary centers focusing on foods for health are being developed at many other universities in the United States, Canada, Europe, and the rest of the world, including Texas A&M University, Iowa State University, the University of Illinois, Purdue University, and the University of Minnesota. There is a need to encourage collaboration between scientists at these various universities and identify strengths specific to individual programs which need not be duplicated at other locations.

by Diane M. Barrett, Ph.D., a Professional Member of IFT, is Fruit & Vegetable Products Specialist, Dept. of Food Science & Technology, and Director of the Center for Excellence in Fruit and Vegetable Quality, University of California, Davis, CA 95616 ([email protected]).

The author thanks Christine Bruhn, Jim Thompson, Alyson Mitchell, Dan Kliebenstein, Beth Mitcham, Clare Hasler, and Andy Waterhouse from the Center for Excellence in Fruit and Vegetable Quality for their assistance in preparation of this manuscript and her coauthors on the literature review, Joy Rickman and Christine Bruhn, for allowing some of the information presented in the more comprehensive review to be cited here.