Health and wellness for food companies is no longer an option—it’s the price of doing business,” said Cathy Kapica, Vice President, Global Health and Wellness, Ketchum, and a speaker at the inaugural Food Technology Presents conference held Feb. 27–28, 2008. For contemporary consumers, “health is the new wealth,” observed Kapica, adding that this has opened the door to a major opportunity for food and beverage makers because shoppers are seeking products that will preserve and improve their health.

The conference, which was themed “Developing and Marketing Products for Consumer Health & Wellness,” drew more than 200 attendees. In addition to general sessions, Food Technology Presents incorporated breakout sessions divided along three tracks, which allowed conference-goers to explore the wellness theme from the perspective of food safety and regulations, marketing and packaging, or product development—or a combination of the three.

Marketing Well-Being: It’s Time to Act
Kapica cited a series of converging trends that have given birth to what she termed “the age of well-being.” They include the aging, affluent population, rising healthcare costs, the increased incidence of obesity, and consumer interest in “prevention vs pills.”

“Food is no longer just a nutrition issue, but it’s a moral and social one, as well,” continued Kapica. “Recent research shows that about half of U.S. consumers consider at least one sustainability factor when they make a purchase,” she said.

“Sustainability is being redefined,” Kapica contended. “It’s no longer [just] about your product. It’s about how that product comes to market and everybody it touches in the process. It’s about how you treat your suppliers… the farmers… your employees.

“If you want to be in business in the years going forward,” she counseled, “you need to be able to address these issues in a holistic way… Failure to act in this area is going to be perceived by consumers as a rejection of their values.”

Authenticity is essential, Kapica maintained. Thanks to better-informed consumers, including educated, actively involved “Alpha moms” and media options such as blogging, “Consumers are more actively engaged with companies,” said Kapica. “And if you’re not active and transparent, you will be discovered.”

Additionally, consumers want to hear “positive nutrition” information, Kapica said. “The debate has changed from the absence of negatives to the presence of positives, i.e. “from no fat, salt, sugar” to “vitamins, minerals, antioxidants, protein, and naturally nutrient-rich.”

Shoppers: Savvier Than Ever
Conference presenter Wendy Kapsak, Director of Health and Nutrition for the International Food Information Council (IFIC), is another believer in positive—and easily understandable—nutritional messages.

She emphasized that consumers are more interested in the taste and sensory experience of food than in dissecting its nutritional and functional attributes. “Food is exciting,” she said. “Nutrition—not only does it not taste very good, it’s not exciting… If we change the way we talk about that… we can change the way that consumers think about food.”

Americans are making the diet/health connection—and acting on it, according to Kapsak, who shared findings from 2007 market research studies conducted by IFIC and the IFIC Foundation.

“More Americans than ever before are concerned about nutrition and diet,” said Kapsak. In 2007, the number of consumers who reported making changes to improve the healthfulness of their diet climbed to 66% vs 57% the prior year, IFIC research found. Ninety-five percent of those surveyed said that food and nutrition played a great (75%) or moderate (20%) role in maintaining or improving overall health.

Although they don’t use the term “functional foods,” consumers have some understanding of the concept, according to Kapsak. “Most people do believe that certain foods do have components that provide them with benefits that would impact their overall health,” said Kapsak. An impressive 92% of consumers IFIC surveyed could name a specific food and its associated benefit, up from 77% who could do so in 1998. 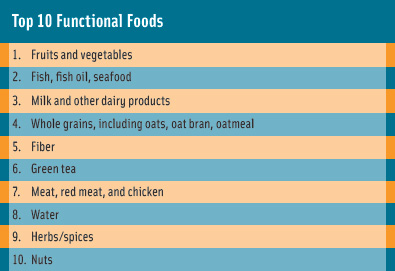 Asked to identify foods or food components that are thought to have health benefits beyond basic nutrition, consumers’ top choice was fruits and vegetables, Kapsak reported. See Figure 1 for a list of consumers’ “Top 10 Functional Foods.”

“Most of those chronic diseases are related in one way or another to physical inactivity and unhealthy diet,” said Jacoby, and because they are perceived as at least partly self-inflicted, they are not attracting the attention of activists, philanthropists, or even government to the extent that communicable diseases do.

Increased agricultural productivity can be linked to the proliferation of chronic diseases. Cheap raw materials and labor lead to cheap ingredients, Jacoby said, and thus, “quantity becomes the cornerstone of the food system.” And the ubiquitous tag line, “all you can eat,” will become “a global metaphor for the food system in the world” and the problems that can stem from abundance, Jacoby reflected.

He further observed that while agricultural production has become more efficient, it has also become less diversified. “You go to Iowa and what you see on the horizon is corn and soybeans,” he said. “Fifty years ago, the average farmer in Iowa was cultivating 40 varieties of foodstuff.”

In addition to diminished diversity, increased yields often come at the expense of a decline in nutritional content. Jacoby cited U.S. Dept. of Agriculture data that shows declines in the protein, vitamin, and mineral content of 43 garden crops between 1950 and 1999.

Jacoby wrapped up his speech by appealing to the food industry to take an active role in the quest to reduce the devastating impact of chronic disease. “This is a problem of our society,” he said. “This is not a problem only of the health system.” Progress is possible only by combining the efforts of industry, society, and health organizations, he maintained.

“We can bring together our expertise, and we can make a better world,” he concluded.

If you didn’t get to attend the Food Technology Presents conference this year—or did go and would like to revisit the experience—IFT offers a convenient and portable educational option via its webcast library.

All 23 conference sessions were recorded and are available for downloading to your computer or MP3 player from the library. Both PowerPoint presentations and audio recordings are offered. Purchase options include individual sessions or the full conference package, with pricing based on IFT membership status and conference attendance.

For more information, go to www.ift.org/ftpc.