Looking at the range of fiber-containing products in the market today, it is clear that fiber has come a long way since 1953, when it transitioned from simply being described as cellulose or “roughage” to “dietary fibre.” In an article in the British Medical Journal in 1953, author E.H. Hipsley included a footnote ascribing the term fiber to lignin, cellulose, and hemicelluloses. F.W. Robison had described fiber as cellulose in his 1904 bulletin titled “Breakfast Foods,” stating that its lower degree of digestibility helped to provide “buoyancy and bulk” to food in the digestive process. 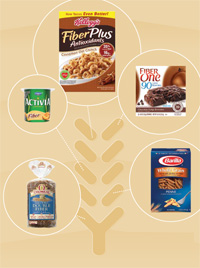 These early studies on the nature, composition, and physiology of fiber demonstrate an interest in the role of fiber in nutrition, health, and disease, even when relatively little was known about the science of fiber. Over the past few decades, increasing scientific evidence has helped to further illuminate the associations of fiber with health and disease prevention.

A Multi-faceted Ingredient
It is sometimes easy to forget that the term fiber today applies to a somewhat heterogeneous assortment of indigestible carbohydrates, from many different sources, with varying characteristics, functionalities, and physiological effects.

While the traditional dichotomous categories of soluble and insoluble fiber are still the most commonly used terms in describing fiber, these terms do not adequately capture the complexity of the fiber spectrum. In addition to the soluble vs insoluble categories, other characteristics such as fermentable vs non-fermentable, viscous vs non-viscous, and intrinsic vs functional are also commonly used to describe different types of fiber (Figure 1). 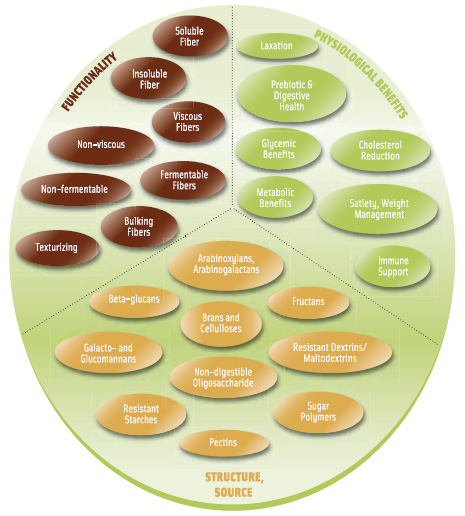 A More Holistic Definition of Fiber
There is no global, universal definition of fiber as yet, but there have been tremendous strides toward a consensus on what constitutes fiber. The most fundamental description of fiber is that it is not hydrolyzed by digestive enzymes, and so for the most part is not absorbed.

In the early years, fiber was almost an afterthought, not really analyzed like the other macronutrients: it was simply the gravimetric residue of the grain seed brans or fruit and vegetable cell walls that remained after all other nutrients were hydrolyzed and quantified. Needless to say, fibers like naturally occurring resistant starches that are not located in brans or cell walls were generally overlooked. As our understanding of the nature of fiber has expanded over the past 40 years, various definitions have been proposed by researchers, practitioners, and regulatory agencies.

The most widely accepted definition of fiber is that proposed by the FAO Codex Alimentarius Commission in 2009. There are three key elements of the Codex definition of fiber. These are as follows: a) carbohydrate polymers of 10 or more monomeric units (with the decision on inclusion of fibers with degree of polymerization (DP) from 3–9 left to national authorities); b) not hydrolyzed by small intestine enzymes; c) could be naturally occurring or extrinsic polymers, which have been shown to have a beneficial physiological effect.

In the United States, the 2009 Codex definition has been largely adopted with the inclusion of fibers with DP of 3–9. According to the Institute of Medicine (2002/2005), acceptable physiological effects include laxation, blood glucose attenuation, normalization of blood lipids, and colonic fermentation. In addition, the fiber has to be measurable by an accepted method of analysis for labeling purposes, with AOAC approved methods most commonly used.

The evolution in regulatory policy has provided a more comprehensive approach to the definition of fiber, one that better probes and reflects the critical aspects of chemical structure, functionality, and physiological impact of fiber.

Fiber’s Role Beyond Laxation
The dietary fiber hypothesis, originally proposed by physician Trowell in 1960, was probably the first thorough attempt to understand the complex relationship between fiber, health, and disease prevention. Trowell’s hypothesis was based on epidemiological assessment of sub-Saharan African populations where there appeared to be exceedingly rare incidences of what he called non-infective colonic diseases: constipation, diverticular disease, ulcerative colitis, and colon cancer.

Over the next two decades, Trowell (1972, 1976), and other medical practitioners like A.R.P. Walker (1974) and B.P. Burkitt (1975) further demonstrated correlations between fiber consumption among various populations and incidence of diseases like heart disease and diabetes mellitus, concluding that fiber seemed to play a protective role against these diet-related diseases.

This relationship between fiber and disease prevention continues to be an area of ongoing and exploratory research. Since the mid-1970s, there have been a considerable number of studies showing the beneficial impacts of fiber on laxation and regularity, blood glucose response and diabetes management, blood lipids, cholesterol, and cardiovascular disease prevention, many of which are compiled in the Institute of Medicine’s (IOM) fiber section of the 2005 Dietary Reference Intakes.

With progress in clinical research, and spurred by consumers increasingly looking for nutritional benefits, our understanding of the complex relationship between fiber and health has vastly increased over the last decade. More specific end points can be evaluated, and physiological effects of the different types of fibers are being established.

Some of the most notable advances in clinical fiber research include the fermentation characteristics and metabolic profiles of specific fibers. There are several studies showing that the fermentation of soluble fibers by beneficial bacteria in the colon influences the digestive system and overall colonic health. We now know that the products of fiber fermentation in the colon—short-chain fatty acids and changes in the composition and populations of colonic bacteria—do vary depending on the type of fiber. Fibers are also metabolized differently, impacting physiological outcomes like blood glucose response and even cholesterol levels. 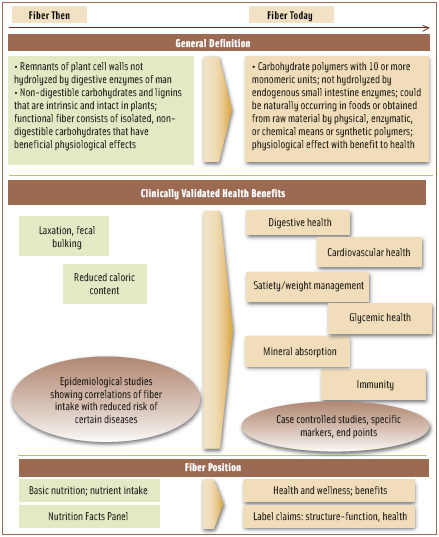 We are therefore coming to understand that different fibers have different physiological effects. This is a monumental step-change from the early understanding of fiber, which prematurely assumed that all fibers were equal (Figure 2).

Nutritional and Health Benefits
Interest and awareness in the nutritional and health benefits of foods is quite high among American consumers. In a 2011 nationwide consumer survey by the International Food Information Council (IFIC), 73% of U.S. consumers reported that food and nutrition play a great role in maintaining health and wellness, with 87% of consumers indicating that they would be interested in learning more about foods with specific health benefits.

An increasing number of consumers are actively seeking out product information and reading product labels, not just for themselves but for their households and children as well.

In a 2011 proprietary consumer survey by Ingredion, the overwhelming majority of respondents indicated that they read product labels, with 92% reporting that they read food labels with some measure of care. IFIC’s 2012 consumer survey found that a significant proportion of consumers look for various items on food and beverage product packages: 66% reported looking at the nutrition facts panel; 51% look at the ingredient list; 42% look for statements about the nutritional benefits; and 30% reported looking for statements about the health benefits.

Fiber in particular seems to be resonating substantially with American consumers. They by and large understand that fiber is a critical dietary component: in the Ingredion proprietary consumer survey, 81% of respondents who typically read product labels reported that they look for fiber content and fiber claims on product labels (Figure 3). 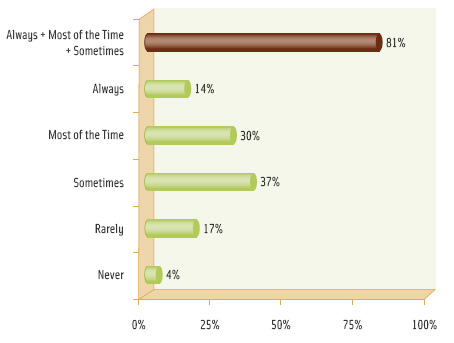 In the 2012 IFIC survey, fiber ranked third—just behind caloric content and whole grains—among key components that consumers take into consideration in making purchase decisions about buying packaged foods or beverages; 62% of consumers surveyed reported that they take fiber content into consideration when buying processed foods. Fiber, in fact, ranked higher than other nutrients associated with health, like protein (56%) and calcium (46%). Furthermore, it appears from the survey that fiber content influences purchase decisions to a greater extent than even some of the high profile ingredients that consumers are often encouraged to reduce consumption of, like sodium/salt (60%), trans fats (56%), and saturated fats (55%).

Consumer interest is driving an even closer examination of the specific benefits of fiber as they increasingly associate fiber with various health benefits. Consumers rank fiber among the top 10 functional foods, according to the 2011 IFIC consumer survey. In that survey, a majority of consumers who were aware of the health benefits of fiber also reported that they were already consuming fiber to help reduce the risk of heart disease (62%), for digestive health (60%), and for healthy blood sugar (62%). Even in nontraditional areas like weight management, there is growing use of fiber. In the 2010 nationwide Gallup satiety survey, 36% of consumers reported following a high fiber diet plan to lose weight. This was an increase from 31% in 2009, and considerably higher than the percentage of consumers who reported being on a high protein diet plan (24%).

Despite overwhelmingly positive attitudes toward fiber, actual intakes of fiber in the United States still fall short of dietary recommendations. In other words, the so-called “fiber gap” still exists. While the IOM recommends daily fiber intakes of 25 g per day for non-pregnant, non-lactating women and 38 g per day for adult men, fiber consumption is still at only about 40% of the goal, according to the 2010 Dietary Guidelines Advisory Committee. Actual intakes still hover around 14–17 g per day among adults. Fiber consumption among children and teenagers in the 9–18-year age bracket also falls short of the recommended 26 g and 31 g per day for girls and boys, respectively.

Over the past few years, innovation in fiber ingredients and product development has vastly broadened the scope of fiber products, from traditional low-moisture product categories like breads and cereals, to include previously uncharted categories in the world of fiber such as dairy products and beverages. For instance, leading-edge ingredient technology enabled the development of smaller molecular weight fibers and fibers with enhanced solubility and process versatility. This in turn is rendering some soluble fibers to be essentially “invisible” in food systems, facilitating their use with barely any discernible impact on food quality.

Data obtained from Mintel’s new products database (2012) show that bakery and snacks are the categories in which the most products touting fiber content are launched. Over the past five years, however, the number of products highlighting fiber content has increased across a broad range of food and beverage categories.

These product development trends actually dovetail with consumer needs. Consumers increasingly have the expectation that they can obtain fiber from a range of the foods and beverages that they enjoy. In Ingredion’s 2011 custom survey, consumers indicated that they would be very interested in obtaining fiber from a wide variety of foods. They are no longer satisfied with only the traditional sources of fiber. The consumer’s fiber experience today has indeed greatly evolved from just a few years ago.

It is now possible to get practically “invisible” fiber in convenient food and beverage delivery forms. This is possible because of the scientific and technical advances that are enabling the development of superior, multi-functional fibers with a range of performance characteristics and benefits.

Strong, Sustained Consumer Interest
There is a surprisingly high level of awareness of the relationship between fiber and health among consumers; interest in increasing fiber in the diet is also high. T.S. Hudson and colleagues (2006), in fact, showed that educational level is a factor in fiber consumption. Even more encouraging, the proportion of consumers who are actively consuming fiber for associated health benefits has either held steady over the last few years or is on an upward tick. There is, in fact, no indication that fiber consumption is stalling; there is, indeed, sustained interest.