Nanotechnology is being increasingly utilized to develop biosensors capable of detecting pathogens. Various approaches for development of such nanosensors have been discussed in previous Food Safety & Quality columns, and researchers at the Institute of Food Technologists’ 2013 Annual Meeting & Food Expo described several additional approaches.

Improving Detection Sensitivity
Bosoon Park, Lead Scientist at the U.S. Dept. of Agriculture’s Agricultural Research Service, discussed use of the spectroscopic technique surface-enhanced Raman scattering (SERS) with different nanosubstrates and aptamers (single-stranded DNA or RNA molecules that can bind to specific target molecules with high affinity and  specificity) for rapidly detecting specific foodborne pathogens from chicken carcass rinse. He reviewed current methods for detecting pathogens in poultry rinse water, such as ISO method 6579, direct fluorescence antibody detection, enzyme-linked immunosorbent assay (ELISA), and polymerase chain reaction (PCR) and said that use of SERS has the potential for rapid detection of pathogens. SERS is a surface-sensitive technique that enhances Raman scattering by molecules adsorbed on rough metal surfaces or nanostructures. 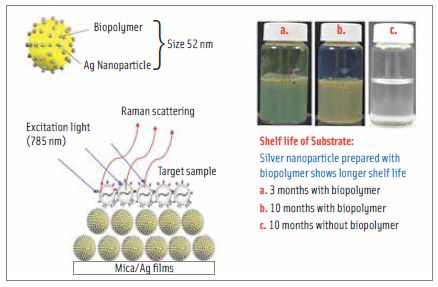 Park also said that improved SERS substrates are needed for Raman signal enhancement and that characterization of substrates is necessary for better understanding of the reliability and reproducibility of SERS methods. Drawbacks of existing SERS substrates, he said, include nanoparticle aggregation, signal variation from spot to spot, difficulty in maintaining stability during storage, reproducibility, the need for specialty equipment, and cost.

Saying that nanocolloid substrates are stable and inexpensive, he described the preparation of a nanocolloid substrate produced by encapsulation of silver nanoparticles with a colloidal polyvinyl alcohol-based biopolymer (BeSN). He characterized the substrate with optical methods and electron microscopy, analyzed the uniformity and reproducibility of the substrate, and found that the biopolymer produced uniform signals by controlling aggregation of silver nanoparticles. He then conducted experiments to measure SERS with aptamers for Salmonella Typhimurium to validate specificity. He measured the plasmon UV absorption of substrates and showed that absorption peaks varied with particle sizes: the higher the plasmon absorption, the higher the Raman intensity. The maximum plasmon absorption was found with 52-nm nanoparticles. The method was able to identify different spectral signatures for different Salmonella serotypes and to differentiate S. Typhimurium from the background microflora of poultry carcass rinse.

Park said that more experiments for aptamer-SERS with BeSN substrate are being conducted and that he and his coworkers will then work on developing an instrument for commercialization. They have already proven the concept, he said, and will continue working on the technology with food matrices but are not working with any companies yet.

He said that the nanotechnology method is faster and higher in sensitivity (lower limit of detection) than current methods but added that major challenges ahead in the development of nanosensors will be reproducibility of the biopolymer-based nanosubstrate to provide repeatability as a sensor. Another challenge in developing nanosensors, he said, is to improve specificity by protecting non-specific binding to the target organism.

Phage-Based Approach
Bryan A. Chin, McWane Professor of Engineering and Director of the Detection and Food Safety Center at Auburn University, described his group’s work on development of a magnetoelastic nanosensor that can provide rapid and specific detection of food-borne pathogens on the surface of fresh fruits and vegetables in real time without sample preparation. The nanosensor consists of a resonator (acoustic wave mass sensor) coated with a biomolecular recognition element that specifically recognizes and binds with a specific target pathogen, Chin said.

The recognition element is a filamentous bacteriophage, a genetically engineered virus approximately 7 nm – 10 nm in diameter and 100 microns long that has more than 8,000 binding sites for the target pathogen. Different filamentous phages are used to bind to different targets. For example, one phage specifically binds to Salmonella, another to Staphylococcus, and another to Campylobacter. (For more information on bacteriophages, see the March 2014 Food Safety & Quality column, “Bacteriophages:Not So Alien.”)

The nanosensor is placed on the surface of a fresh fruit or vegetable that may be contaminated. If the biosensor using a phage specific to Salmonella, for example, comes into contact with Salmonella, the bacteria become bound to the phage and consequently the nanosensor. This additional weight causes the resonant frequency of the biosensor to decrease. The resonant frequency of the nanosensor is measured continuously for five minutes with a wireless wand (reader) held 1 mm – 2 mm above the biosensor. A decrease in the resonant frequency is a positive indication that the fresh fruit or vegetable is contaminated with Salmonella. Control sensors are used to monitor for background changes that could cause false indications.

The next step in developing the nanosensor, Chin said, is to increase the standoff distance—the distance between the wand and the surface of the fruit or vegetable on which the sensors have been placed—for ease of use. A standoff distance of 5 mm would be ideal, he said. He envisions commercialization of a handheld instrument in three to five years. A challenge ahead in developing nanosensors for food safety, he said, is to develop improved methods of biomolecular recognition with greater specificity. 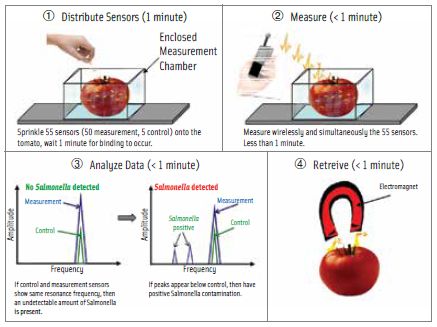 Antibody Approaches
Evangelyn Alocilja, Program Director of Michigan State University’s Nano-Biosensors Laboratory, described her earlier development of a portable nanosensor for the rapid detection of Escherichia coli O157:H7 in less than one hour from sample preparation. The nanosensor is based on nanoparticles that have been conjugated with a monoclonal antibody for E. coli O157:H7 and coated with an electrically active film. When the monoclonal antibody captures the pathogen, a change in the resistivity of the nanoparticle indicates the presence of the pathogen. The nanosensor was described in detail in the April 2012 Food Safety & Quality column, “Two More Products for Pathogen Testing.” She said that the nanosensor could detect E. coli O157:H7 as low as 10 cfu/mL with a dynamic detection range of 10 cfu/mL – 106 cfu/mL. Test results indicate that the nanosensor has great potential for detecting low levels of pathogenic foodborne organisms without pre-enrichment and may be an excellent tool in food safety and public health monitoring systems.

Alocilja is developing a portable nanosensor based on nuclear magnetic resonance and is applying for a patent. The nanosensor uses monoclonal antibody-based nanoparticles as proximity sensors to enhance NMR. She said that she cannot predict how close the device is to commercialization since commercialization would involve first obtaining a patent and then working with a company to commercialize it, as she did with nanoRETE Inc. and the E. coli O157:H7 nanosensor.

The major benefits of nanosensors for food safety compared to standard methods of testing for bacterial contamination of foods, she said, would be time and cost. Nanosensors would take less than an hour for results whereas standard methods take longer or would be more expensive. For example, culture methods take up to seven days, PCR is shorter but still expensive, and ELISA methods, which take only two to four hours, are also expensive. The major challenges ahead with respect to nanosensors, she said, relate to sample preparation. There are a lot of factors, such as type of food, consistency, even the protein and fat content, that must be considered.