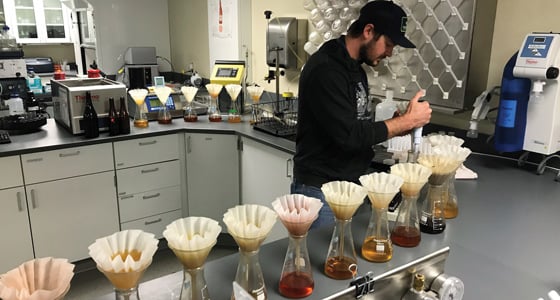 People have been producing and drinking beer around the world since ancient times. Many beers today are produced by large, mainstream brewing companies, but an increasing number are being produced by craft brewers. The Brewers Association (BA) defines a craft brewer as any small independent brewer producing six million barrels of beer or less per year and constituting no more than 25% of the ownership of an alcoholic beverage company that is not itself a craft brewer. Mainstream and craft brewers produce many different styles of beer, but craft brewers are generally more adventurous in their formulations.

According to the BA, the top four brewing companies in the United States in 2018, based on beer sales volume, were Anheuser-Busch, MillerCoors, Constellation, and Heineken, and 40 of the top 50 overall beer companies were craft breweries, the top four being D.G. Yuengling & Son, Boston Beer, Sierra Nevada Brewing, and New Belgium Brewing. Regardless of brewery size, the brewing process is basically the same.

Grains (wheat, barley, oats, or rye) are steeped in cold water and dried (malted) to allow them to germinate and release enzymes that convert starch into sugar. The grains are milled, then put into a vessel called a mash tun, where they are held at a warm temperature to allow the enzymes to break down the complex carbohydrates into simple fermentable sugars. This mash is then transferred into a vessel called a lauter tun, where the sweet liquid in the mash, referred to as wort, is separated from the spent grains. The wort is transferred into a kettle. Hops are added, and the wort is boiled to sterilize it, coagulate proteins so they don’t form haze or cause filtration problems later, boil off dimethyl sulfide (which produces an off-flavor), and isomerize the alpha acids in the hops to provide bitterness. The wort is then cooled and aerated, and yeast is added for fermentation, producing carbon dioxide, alcohol, aromas, and flavors. Saccharomyces cerevisiae is generally used to produce ales, and Saccharomyces pastorianus is generally used to produce lagers. Some craft brewers use other yeast species and even bacteria to brew wild fermented beers and sour beers. After fermentation, the beer is transferred into a vessel called a bright tank for maturation, where it is cooled and yeast is allowed to flocculate and settle out, clarifying the beer and physically stabilizing it. Additional carbon dioxide can be added during fermentation or maturation. Then the beer is conditioned, potentially filtered and/or pasteurized, and packaged.

Ales are usually produced at warmer fermentation temperatures, and lagers at cold temperatures. Most beers produced in the United States are light lagers, with lower alcohol content, less aroma, and less bitterness than ales.

Quality Testing at New Belgium Brewing
Dana Sedin, QA chemistry and sensory manager at New Belgium Brewing and president of the American Society of Brewing Chemists (ASBC), said that breweries conduct quality tests at each stage of the brewing process. New Belgium Brewing uses many of the quality tests published in the ASBC Methods of Analysis along with in-house methods for quality parameters for which there are no ASBC test methods and follows the BA quality and food safety guidelines for draught beer. The company, which has breweries in Colorado, North Carolina, and California, is the fourth largest craft brewer in the United States. It markets 36 different brands of beer across the United States and eight other countries, including a gluten-reduced beer, and sold 844,937 barrels of beer in 2018 (a beer barrel is 31 U.S. gallons). 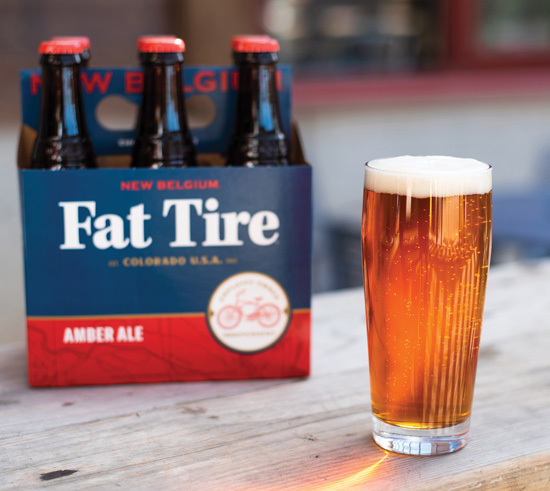 Sedin said that the tests that New Belgium conducts on the hot side of its brewing process—mash tun, lauter tun, and kettle—include pH, specific gravity, dimethyl sulfide (an off-flavor that may be produced during wort heating), bitterness (iso-alpha acids), salts, color, and sugars. Tests conducted during fermentation include vicinal diketones (VDKs) (butterscotch-like off-flavors that yeast produces early in the fermentation process, then resorbs later in the process and converts into nonflavor-active compounds), alcohol, color, pH, specific gravity, and fermentation volatiles. Tests during maturation include alcohol, color, pH, density, VDKs, and hop aroma compounds, tested by gas chromatography/mass spectrometry. And tests at the bright tank include alcohol, color, pH, density, and turbidity. Microbiological testing is conducted throughout the brewing process.

The company conducts sensory evaluation on every batch of beer before release for packaging and distribution, Sedin said. The company also routinely conducts sensory testing on water and sometimes on malt. Each of the company’s breweries has a room set up for sensory evaluation. Sensory testing is typically conducted in a low-light environment with a lamp that panelists can turn on to do a visual evaluation. Sensory panelists come to the room between set times on Monday through Friday and are presented with a series of beers randomized by sensory software. Panelists are presented one to six beers at a time and taste up to 12 beers during a session. They evaluate the beer for aroma, taste, mouthfeel/body, and appearance. Panelists typically swallow the beer as part of the evaluation and answer a series of questions about the beer. In some cases, panelists conduct a difference test or are asked to describe a new beer. Their sensory data are analyzed statistically; action is then taken on any anomalies.

The company averages 20 to 30 trained panelists per day. They are trained in descriptive analysis of the appearance, flavor, aroma, and mouthfeel of beer and learn the characteristics of each brand of beer the company makes, to have a baseline for comparing subsequent batches. Training is focused on identifying off-notes in beer or attributes that are specific to a style of beer that should be present at a specific level. During training, the panelists are asked to identify beer brands, identify specific off-notes, scale beer aromas and tastes, or use descriptive language to identify the primary attributes in beer. Sensory training is a long process, Sedin said, as potential panelists need to show that they can consistently identify off-notes or attributes that don’t belong in beer. The number of repetitions required before a panelist is validated can take months of training and panel participation.

More than a thousand different compounds have been identified in beer. To help establish a standard vocabulary for beer sensory analysis, Morton C. Meilgaard and his associates developed the Beer Flavor Wheel in the 1970s. It was adopted by the European Brewery Convention (EBC), the ASBC, and the Master Brewers Association of the Americas and has been updated by the ASBC. New Belgium Brewing uses some of the descriptors on the flavor wheel.

Sedin said that significant research is being conducted, primarily by universities, on brewing analysis and evaluation and is often published in the Journal of the American Society of Brewing Chemists. This includes metabolomic work applied to brewing science. He added that continued improvements in the ability of instruments to measure trace levels of compounds can have an impact on beer flavor and stability.

Organizations That Provide Standards and Training
The American Society of Brewing Chemists publishes its Approved Methods of Analysis. The 4th edition is available online, which allows continual updating of all methods approved by the association’s technical committee. The society also provides a Sensory Webinar Series for its members that includes information on how to select, train, and validate a panel and other sensory-related topics and a Grow Your Own Lab website that provides guidance on starting or improving a brewing laboratory.

The Master Brewers Association of the Americas encourages scientific research into brewing and makes its research available to the public through conferences, discussion groups, journals, publications, and seminars. It also offers the course “Brewing & Malting,” which includes information on descriptive analysis of beer.

The Brewers Association publishes Best Practices Guide to Quality Craft Beer and Beer Style Guidelines each year as a reference for brewers and judges of beer competitions such as the association’s Great American Beer Festival and the World Beer Cup. It also publishes the Draught Beer Quality Manual and offers an introductory course on craft beer. The association’s technical committee funds craft beer research on safety and sustainability projects.

The Brewers of Europe is a coalition of national brewers’ associations from 29 European countries. Its “BrewUp” website includes the “Analytica EBC,” the reference analytical methods developed by the organization’s European Brewery Convention (EBC). The organization sometimes develops international methods in collaboration with the ASBC.

The World Brewing Academy, an alliance between the Siebel Institute and the Doemens Academy, offers online brewing courses and programs, including an International Diploma in Brewing Technology program and a Master Brewer program.