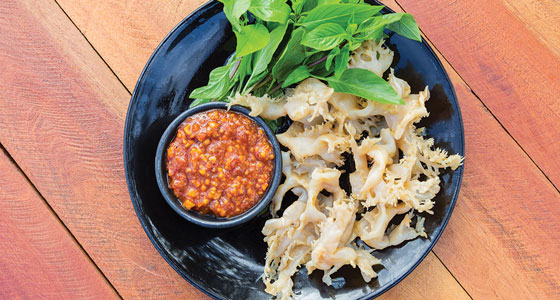 What will we be eating in 2025, 2050, and 2169? More plant-based foods in the next decade, cultured meat and underutilized seafood species at mid-century, and customized nutrient patches and pills 150 years from now, according to a “Future of Food Report” from British supermarket chain Sainsbury’s as part of its 150th anniversary celebration.

“In five years’ time, alongside medication, our doctors could be incorporating food advice as health prevention techniques to help alleviate our ailments,” stated the report. “Sainsbury’s has already started to help out customers with boosting nutrients through the launch of our Super Mushrooms—containing vitamin D and B12—and there is great potential for biofortification foods to become much more common on our shelves.” Sainsbury salmon are fed a bespoke diet that is specifically formulated to deliver a week’s worth of long chain omega 3 fatty acids (EPA and DHA) in a single portion.

“It’s expected that a quarter of all British people will be vegetarian in 2025 (up from one in eight Britons today) and half of us will identify as flexitarians (up from a fifth today),” declared the report. “Sainsbury’s alone has already seen a 24% increase in customers searching for vegan products online, and a 65% increase in sales of plant-based products year-on-year, as customers increasingly consider a vegan, vegetarian, or flexitarian lifestyle.”

The nontraditional or alternative proteins market ($4.2 billion in 2016) is expected to grow more than 25% by 2025, noted the report. Insect and algae protein sources represent a sustainable and less resource-intensive alternative to conventional livestock feed.

By 2050, jellyfish and other “invasive species” may be found in the seafood case as recent research has documented their beneficial nutrients and vitamins. We may see a “lab-grown” supermarket aisle, where shoppers can pick up cultured meats and kits to grow meat at home. Meat, as we know it today, may become a luxury product.

“Cellular protein, ‘meaty tissue’ cultivated independently from animals using stem cells, is drawing much attention for its promise of reducing the need for farmed animals. While beef and fish are currently major areas of development, other applications expected in 2050 include eggs, milk, and gelatin,” stated the report. Making such products appeal to consumers will require a concerted effort to change social norms. The notion of meat from an animal will shift to cultured meat as a healthy and efficient protein tissue that is lab-grown—similar to how we brew beer today.

“We could start to see a very different food landscape in 150 years, as scientists may well be farming in space and sending back their learnings to us on Earth,” stated the report. “This would be instrumental to us being able to farm on land which was previously barren—providing us with seasonal produce all year round. By 2169, the revival of deserts, coupled with carbon-neutral logistics, means that we may well be eating vegetables and produce from areas that were once unthinkable as agricultural or arable land.

“With developments in technology happening every day, there are endless possibilities for how we could be consuming our food in the future. It’s likely that we’ll be consuming our key nutrients through implants. While nutrition patches and drips could replace our day-to-day intake, traditional celebrations—birthdays, family occasions—could be bigger and better than ever before, with the aesthetics of food strengthening the bonds of community.”

Why Isn't the Heartland Home to More Food Startups? March 1, 2020

Bioavailability and metabolism of chlorogenic acids (acyl‐quinic acids) in humans

Antibacterial applications of metal–organic frameworks and their composites