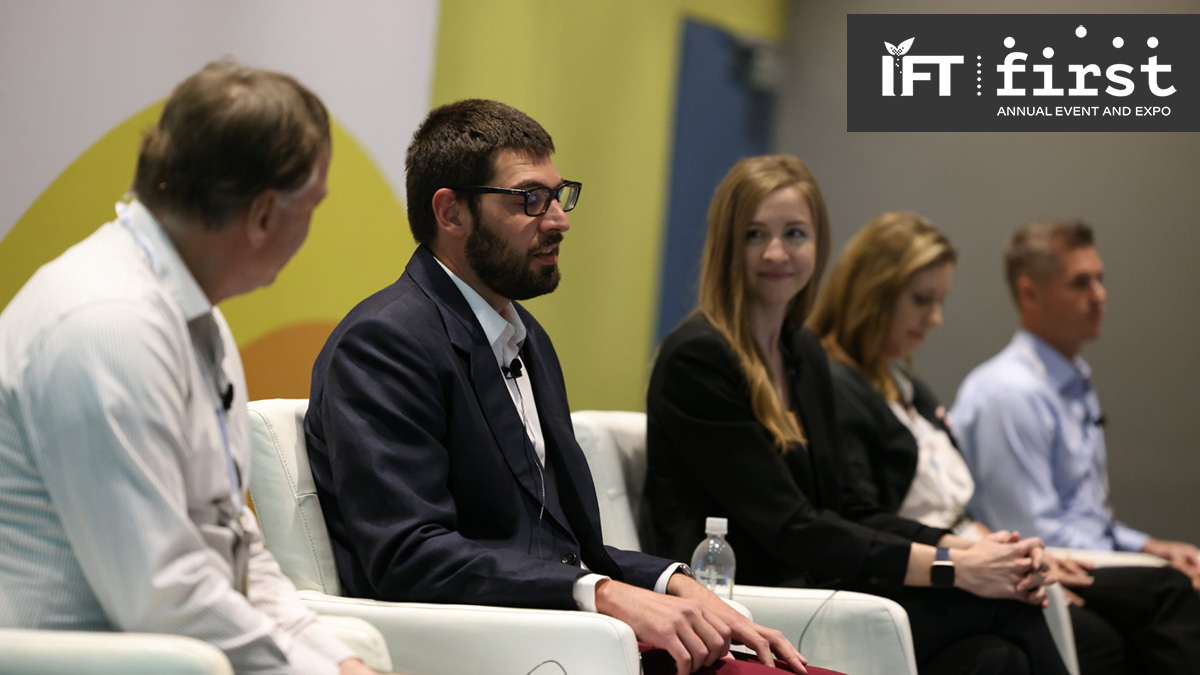 To convince consumers that food tech innovation initiatives are beneficial, food scientists need to come out from behind their curtain of academic degrees and other professional accomplishments to make a gut-level connection and meet consumers where they are—whether that’s on social media, in chat rooms, or watching television—before trying to reason with them.

That’s according to panelists who took part in a multi-session conversation on the topic of, “How do consumer biases and misinformation affect innovation initiatives?” held July 11 at IFT FIRST, and whose research presentations on a variety of related, specific topics were made available as on-demand sessions prior to the conference.

Food scientists fall into the trap of thinking that if they just educated consumers by presenting additional facts, shoppers would learn to trust those in the profession and readily buy into new innovations despite the fact that they might clutter up package labels with unfamiliar terms, according to Roxi Beck, consumer engagement director at The Center for Food Integrity, whose on-demand presentation covered, “Technology in Our Phones But Not in Our Food? Earning Acceptance in Ag and Food Innovation for a Sustainable Future.”

“Who in the world has more time for more information? How are they able to absorb it and apply it to their life?” said Beck. “You have to be with them—who they are, what they’re feeling, the stresses they have, and start from there. Maybe that’s at a book club; maybe it’s an M&A fight.

“One of the biggest dangers is the word, ‘educate,’” she added. “The heart and the gut are drivers of decision-making for consumers. The brain comes second. It’s very different from the process technical people use. Consumers are irrational. They’re not educated in the same way you are. But they’re making those decisions every day for the people they love.”

Taylor Wallace, principal and CEO of Think Healthy Group LLC and a frequent guest on “The Dr. Oz Show,” said food scientists need to be out there communicating in whatever media are most comfortable for them—and do it in a fun, relatable way. He’s made gummy worms on television and frequently makes joking comparisons likening his professional life that of the fictional movie character Clark Griswold.

“How do I turn this into a fun thing that people watching this show want to look at? You’ve got to appeal to the producer,” said Wallace, whose on-demand presentation covered, “The Impact of Simple Sodium Reduction Strategies on Improving Public Health.” He also writes a blog, and a post he wrote about MSG two years ago still generates eight to 10 messages a week, he said. “Each of us has strengths in communication,” he added.

Tia Rains, vice president of customer engagement and strategic development at Ajinomoto Health & Nutrition North America Inc., whose on-demand presentation covered “What to Do When People Believe Misinformation,” has used a gut-level connection to convince people that MSG is safe, where logic has sometimes failed.

“You cannot lead with facts when it comes to pretty much anything these days. There’s so much distrust,” she said. “You have to lead with something that’s emotional. We’ve made a lot of ground talking about the racist history of [qualms about] MSG. With the younger generation, that’s very compelling. Then you can tell them the facts. But you have to open the door with something emotional, to get them receptive to new information.”

Food scientists need to figure out where people are and disrupt their food-buying habits in ways they are receptive to being disrupted, said David Lundahl, CEO of InsightsNow, whose on-demand presentation covered, “Overcoming Implicit Biases for a Future of Sustainable Foods.”

But building consumer trust will take time and require those in the industry to think long and hard about not only the right messages, but also the right messengers. “People don’t need more information. They need stories. That’s where the emotional connection is,” said Lundahl.

Making a dent will require an industry-wide coalition, said Rains. “One-off conversations with friends isn’t going to move the needle. We need a comprehensive program,” she said. “If we’re all saying the same thing, they’re going to believe us.”

Such an effort would require a delicate dance among firms who are usually competitors, Beck noted. “You have to do it in a way that’s authentic, where everyone has a voice, and it matches needs of the consuming public,” she said. “We’ve got to cut the jargon. We’ve got to leverage analogies.”

This article describes the challenges of increasing recycling rates for film and paperboard food packaging and how the industry is continuing to develop more recycling solutions.

How the nonprofit group Kesho Congo formulates ready-to-use supplementary food from leaf protein concentrate in the Democratic Republic of Congo.